The Tour of Qatar is an annual professional cycling stage race held in Qatar. First organized in 2002, the event was part of the UCI Asia Tour until 2016. The 2017 edition was upgraded to the UCI World Tour for the first time.[1][2]

The event consists of a men's competition over five stages, and, since 2009, a women's competition over four stages – held a week before the men's race. Because Qatar is entirely flat, the tour is almost always won by a sprinter or classics specialist. Belgian Tom Boonen and Dutchwoman Kirsten Wild hold the record with four overall wins, in the men's and ladies' competition respectively. 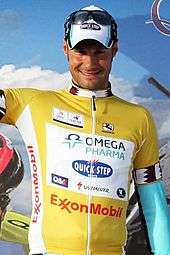 Tom Boonen (pictured at the 2012 Tour of Qatar) holds a record 4 overall wins and 22 stage wins. 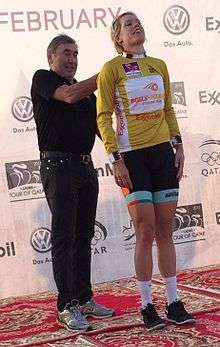 Eddy Merckx presenting Ellen van Dijk with the gold leader's jersey after the first stage of the 2015 Ladies Tour of Qatar.