Heinrich Haussler (born 25 February 1984 in Inverell, Australia) is an Australian road racing cyclist of German heritage. Haussler races for UCI WorldTour team IAM Cycling. He has won 2 stages in Grand Tours during his career, one at the 2005 Vuelta a España and another at the 2009 Tour de France. He is also a good Classics specialist, registering top results in notable classic races, and was the 2015 Australian national road race champion.

Haussler was born to a German father and Australian mother and raised in the town of Inverell, New South Wales, Australia, before leaving for Germany in 1998 at age 14 to pursue a dream of being a professional cyclist.[1][2]

Haussler turned professional in 2005 and shot to prominence with a stage win in the 2005 Vuelta a España. Haussler took out five wins in 2006 and has had strong classics campaigns since then. He looks set to be a rider of the future in the classics, in 2009 coming in second in both the Tour of Flanders and Milan–San Remo, narrowly beaten in the latter by Mark Cavendish in a photo-finish. He also finished a strong 7th in the 2009 edition of Paris–Roubaix. Haussler's biggest victory so far was the win of Stage 13 in 2009 Tour de France.[3] Haussler lived in Cottbus starting in 1998, and in 2009 in Freiburg im Breisgau.[1] 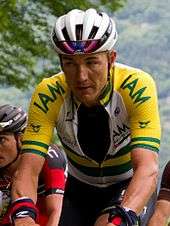 A dual Australian/German national, Haussler originally raced under a German license. However, in a 2008 interview on CyclingNews.com, he suggested that he would no longer race for Germany as he wished to compete for Australia in the 2010 UCI Road World Championships in Melbourne. When asked what he would do if chosen to race for Germany in the 2008 UCI Road World Championships or at the 2008 Olympics he stated, "I wouldn't take it. If you start for a country at the worlds there is a three year ban before you can ride for another."[4] The UCI, however, insisted that if Haussler wanted to ride for Australia he would have to give up his German citizenship, which the cyclist said in a November 2009 interview "is not open for debate at the moment".[5]

In July 2010, the Cervélo Test Team announced that Haussler would indeed give up his German citizenship and will ride for Australia in the future.[6] However, a nagging knee injury forced Haussler out of what would have been his international cycling debut for his birth country at the 2010 World Championships.[7]

On 26 August 2010, Haussler's employer, Cervélo Test Team, confirmed rumors that it would cease to exist after the end of the current season.[8] On 1 September 2010, it was announced he would be joining the Garmin–Cervélo for 2011.[9][10]

In the 2012 Tour of California, Haussler was denied victory on the four first stages of the race by Peter Sagan of the Liquigas–Cannondale squad, who beat him to the line each time. He would have to settle for second on every one of those stages.[11]

Haussler left Garmin–Sharp at the end of the 2012 season, and joined the new IAM Cycling team for the 2013 season.[12] In 2015 he won the Australian National Road Race Championships for the first time in his career.[13]