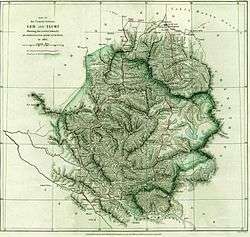 Map of W. H. Johnson showing the route of his trip to Khotan from Leh; in this map, Johnson refers to the pass as "Hindotak diwan Pass." He himself traveled through the Yangi diwan Pass, some 20 miles up-river from Hindutash, on his outward journey, and returned via the Sanju diwan Pass near Shahdula. Johnson placed the border of Kashmir with Turkistan at Bringja. (Refer accompanying maps for position of Bringja)

The Trans-Karakoram Tract (Hindi: शक्स्गम्, Shaksgam; Chinese: 喀喇昆仑走廊; pinyin: Kālǎkūnlún zǒuláng), also known as Shaksgam or the Shaksgam Tract, is an area of more than 9,900 km2 (3,822 sq mi) along both sides of the Shaksgam River and extending from the Karakoram to the Kunlun range. The tract is entirely administered by the People's Republic of China as a part of Kargilik County and Taxkorgan Tajik Autonomous County in the Kashgar Prefecture of Xinjiang Autonomous Region, but claimed by Pakistan until 1963.[1] It is claimed by India as part of the state of Jammu and Kashmir. 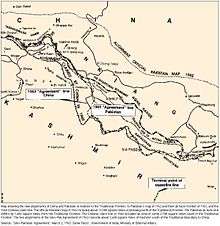 Official alignment of the Government of Pakistan in 1962. The border is in the extreme north and is depicted as a dotted line with the caption Alignment Official Pakistan Map 1962

Most of the tract is composed of the Shaksgam Valley[2] and was formerly administered as a part of Shigar, a valley in the Baltistan region. The Raja of Shigar controlled most of this land until 1971, when Pakistan abolished the Raja government system. A polo ground in Shaksgam was built by the Amacha Royal family of Shigar, and the Rajas of Shigar used to invite the Amirs of Yarkand to play polo there. Most of the names of the mountains, lakes, rivers and passes are in Balti/Ladakhi, suggesting that this land had been part of Baltistan/Ladakh region for a long time.

The tract is one of the most inhospitable areas of the world, with some of the highest mountains. Bounded by the Kun Lun Mountains in the north, and the Karakoram peaks to the south, including Broad Peak, K2 and Gasherbrum, on the southeast it is adjacent to the highest battlefield in the world on the Siachen Glacier region most of which is controlled by India. 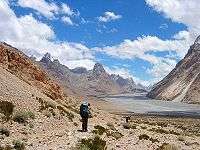 Historically the people of Hunza cultivated and grazed areas to the north of the Karakoram, and the Mir of Hunza claimed those areas as part of Hunza's territories. Those areas included the Raskam Valley, north of the Shaksgam Valley.[3]

In 1889 the first expedition to the Shaksgam Valley by a European was undertaken by Francis Younghusband (who referred to the Shaksgam as the Oprang).[4] In March 1899 the British proposed, in a formal Note from Sir Claude MacDonald to China, a new boundary between China and British India. The Note proposed that China should relinquish its claims to suzerainty over Hunza, and in return Hunza should relinquish its claims to most of the Taghdumbash and Raskam districts. The Note proposed a border which broadly followed the main Karakoram crest dividing the watersheds of the Indus River and the Tarim River, but with a variation to pass through a Hunza post at Darwaza near the Shimshal Pass. The Chinese did not respond to the Note, and the British took that as acquiescence.[5] The Macdonald line was modified in 1905 to include in India a small area east of the Shimshal Pass, to put the border on the Oprang Jilga River and a stretch of the Shaksgam River.[6]

At the same time, in view of "The Great Game", Britain was concerned at the danger of Russian expansion as Qing dynasty China weakened and so adopted a policy of claiming a border north of the Shaksgam River. This followed a line proposed by Sir John Ardagh in a Memorandum of 1897.[7] That border included the Mir of Hunza's claim over the Raskam Valley. However, British administration never extended north of the Karakoram watershed.[8]

From 1899 until the independence of India and Pakistan in 1947, the representation of the border on maps varied. In 1926 Kenneth Mason explored and surveyed the Shaksgam Valley 5,800 sq km[9] In 1927 the Government of British India abandoned any claim to the area north of the Macdonald line, but the decision did not find its way on to British maps.[10] By 1959, however, Chinese maps were published showing large areas west and south of the Macdonald line in China. That year, the Government of Pakistan announced its willingness to consult on the boundary question.[11]

From 1947 India claimed sovereignty over the entire area of the pre-1947 independent state of Jammu and Kashmir, and therefore maintained that Pakistan and China did not share a common border.

In 1959 the Pakistani government became concerned over Chinese maps that showed areas the Pakistanis considered their own as part of China. In 1961 Ayub Khan sent a formal note to China; there was no reply. It is thought that the Chinese might not have been motivated to negotiate with Pakistan because of Pakistan's relations with India. 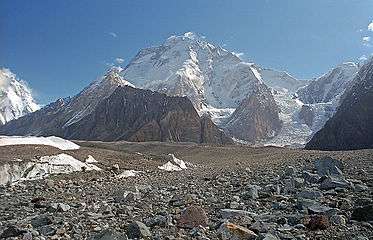 Broad Peak lies on the border of the Tract

After Pakistan voted to grant China a seat in the United Nations, the Chinese withdrew the disputed maps in January 1962, agreeing to enter border talks in March. Negotiations between the nations officially began on October 13, 1962 and resulted in an agreement signed on 2 March 1963 by foreign ministers Chen Yi of China and Zulfikar Ali Bhutto of Pakistan.