This article is about a geometry concept. For a place in Lexington, Kentucky, see Triangle Center.

In geometry, a triangle center (or triangle centre) is a point in the plane that is in some sense a center of a triangle akin to the centers of squares and circles, i.e. a point that is in the middle of the figure by some measure. For example the centroid, circumcenter, incenter and orthocenter were familiar to the ancient Greeks, and can be obtained by simple constructions.

Each of these classical centers has the property that it is invariant (more precisely equivariant) under similarity transformations. In other words, for any triangle and any similarity transformation (such as a rotation, reflection, dilation, or translation), the center of the transformed triangle is the same point as the transformed center of the original triangle. This invariance is the defining property of a triangle center. It rules out other well-known points such as the Brocard points which are not invariant under reflection and so fail to qualify as triangle centers.

All centers of an equilateral triangle coincide at its centroid, but they generally differ from each other on scalene triangles. The definitions and properties of thousands of triangle centers have been collected in the Encyclopedia of Triangle Centers.

Even though the ancient Greeks discovered the classic centers of a triangle they had not formulated any definition of a triangle center. After the ancient Greeks, several special points associated with a triangle like the Fermat point, nine-point center, symmedian point, Gergonne point, and Feuerbach point were discovered. During the revival of interest in triangle geometry in the 1980s it was noticed that these special points share some general properties that now form the basis for a formal definition of triangle center.[1][2][3] As of 11 November 2014, Clark Kimberling's Encyclopedia of Triangle Centers contains an annotated list of 6,102 triangle centers.[4]

A real-valued function f of three real variables a, b, c may have the following properties:

This definition ensures that triangle centers of similar triangles meet the invariance criteria specified above. By convention only the first of the three trilinear coordinates of a triangle center is quoted since the other two are obtained by cyclic permutation of a, b, c. This process is known as cyclicity.[5][6]

In some cases these functions are not defined on the whole of ℝ3. For example the trilinears of X365 are a1/2 : b1/2 : c1/2 so a, b, c cannot be negative. Furthermore in order to represent the sides of a triangle they must satisfy the triangle inequality. So, in practice, every function's domain is restricted to the region of ℝ3 where a ≤ b + c, b ≤ c + a, and c ≤ a + b. This region T is the domain of all triangles, and it is the default domain for all triangle-based functions.

There are various instances where it may be desirable to restrict the analysis to a smaller domain than T. For example:

Not every subset D ⊆ T is a viable domain. In order to support the bisymmetry test D must be symmetric about the planes b = c, c = a, a = b. To support cyclicity it must also be invariant under 2π/3 rotations about the line a = b = c. The simplest domain of all is the line (t,t,t) which corresponds to the set of all equilateral triangles. 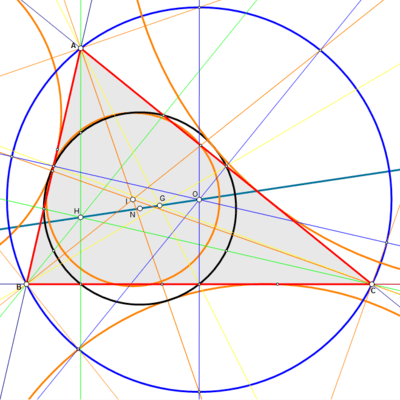 Let A'BC be the equilateral triangle having base BC and vertex A' on the negative side of BC and let AB'C and ABC' be similarly constructed equilateral triangles based on the other two sides of triangle ABC. Then the lines AA', BB' and CC' are concurrent and the point of concurrence is the 1st isogonal center. Its trilinear coordinates are

Then f is bisymmetric and homogeneous so it is a triangle center function. Moreover the corresponding triangle center coincides with the obtuse angled vertex whenever any vertex angle exceeds 2π/3, and with the 1st isogonic center otherwise. Therefore this triangle center is none other than the Fermat point.

The first and second Brocard points are one of many bicentric pairs of points,[7] pairs of points defined from a triangle with the property that the pair (but not each individual point) is preserved under similarities of the triangle. Several binary operations, such as midpoint and trilinear product, when applied to the two Brocard points, as well as other bicentric pairs, produce triangle centers.

A triangle center P is called a regular triangle point if the trilinear coordinates of P can be expressed as polynomials in Δ, a, b and c, where Δ is the area of the triangle.

A triangle center P is said to be a major triangle center if the trilinear coordinates of P can be expressed in the form f(A) : f(B) : f(C) where f(A) is a function of the angle A alone and does not depend on the other angles or on the side lengths.[9]

Let f be a triangle center function. If two sides of a triangle are equal  (say a = b)  then

Assume a,b,c are real variables and let α,β,γ be any three real constants.

There are other center pairs besides the Fermat point and the 1st isogonic center. Another system is formed by X3 and the incenter of the tangential triangle. Consider the triangle center function given by :

For the corresponding triangle center there are four distinct possibilities:

Routine calculation shows that in every case these trilinears represent the incenter of the tangential triangle. So this point is a triangle center that is a close companion of the circumcenter.

Some other names for dilation are uniform scaling, isotropic scaling, homothety, and homothecy.

The study of triangle centers traditionally is concerned with Euclidean geometry, but triangle centers can also be studied in hyperbolic geometry. Using gyrotrigonometry, expressions for trigonometric barycentric coordinates can be calculated that have the same form for both Euclidean and hyperbolic geometry. In order for the expressions to coincide, the expressions must not encapsulate the specification of the anglesum being 180 degrees.[10][11][12]

A generalization of triangle centers to higher dimensions is centers of tetrahedrons or higher-dimensional simplices.[12]