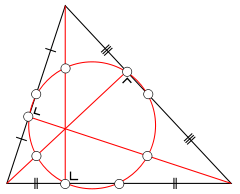 Even if the orthocenter and circumcenter fall outside of the triangle, the construction still works.

In geometry, the nine-point circle is a circle that can be constructed for any given triangle. It is so named because it passes through nine significant concyclic points defined from the triangle. These nine points are:

For an acute triangle, six of the points (the midpoints and altitude feet) lie on the triangle itself; for an obtuse triangle two of the altitudes have feet outside the triangle, but these feet still belong to the nine-point circle.

Although he is credited for its discovery, Karl Wilhelm Feuerbach did not entirely discover the nine-point circle, but rather the six point circle, recognizing the significance of the midpoints of the three sides of the triangle and the feet of the altitudes of that triangle. (See Fig. 1, points D, E, F, G, H, and I.) (At a slightly earlier date, Charles Brianchon and Jean-Victor Poncelet had stated and proven the same theorem.) But soon after Feuerbach, mathematician Olry Terquem himself proved the existence of the circle. He was the first to recognize the added significance of the three midpoints between the triangle's vertices and the orthocenter. (See Fig. 1, points J, K, and L.) Thus, Terquem was the first to use the name nine-point circle. 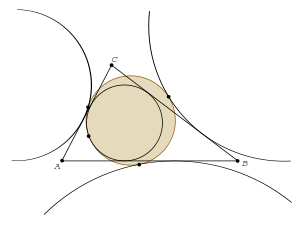 The nine-point circle is tangent to the incircle and excircles

... the circle which passes through the feet of the altitudes of a triangle is tangent to all four circles which in turn are tangent to the three sides of the triangle... (Feuerbach 1822)

The triangle center at which the incircle and the nine-point circle touch is called the Feuerbach point.

Other properties of the nine-point circle 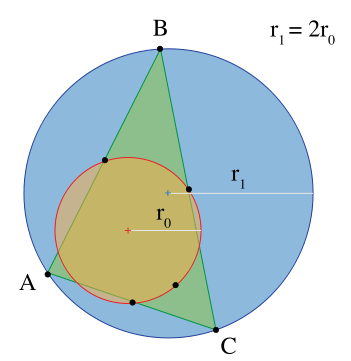 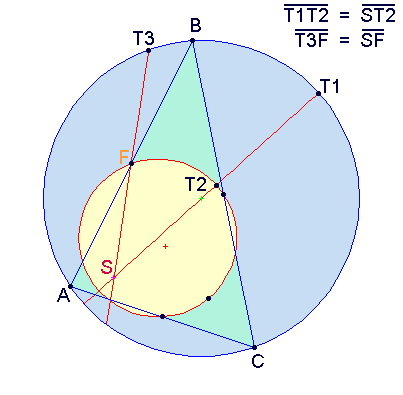 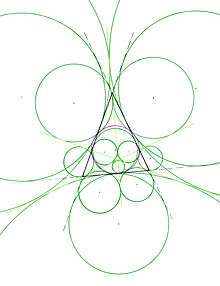 where R is the common circumradius; and if

where K is kept constant, then the locus of P is a circle centered at N with a radius

The circle is an instance of a conic section and the nine-point circle is an instance of the general nine-point conic that has been constructed with relation to a triangle ABC and a fourth point P, where the particular nine-point circle instance arises when P is the orthocenter of ABC. The vertices of the triangle and P determine a complete quadrilateral and three "diagonal points" where opposite sides of the quadrilateral intersect. There are six "sidelines" in the quadrilateral; the nine-point conic intersects the midpoints of these and also includes the diagonal points. The conic is an ellipse when P is interior to ABC or in a region sharing vertical angles with the triangle, but a nine-point hyperbola occurs when P is in one of the three adjacent regions, and the hyperbola is rectangular when P lies on the circumcircle of ABC.