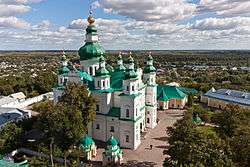 The Trinity Monastery in Chernihiv with its main cathedral, which was constructed in 1679.

The Trinity Monastery (Ukrainian: Троїцько-Іллінський монастир, translit. Troits’ko-Illins’kyi monastyr) is a historic monastery in the city of Chernihiv in northeastern Ukraine.

Initially it was founded by Saint Anthony of Pechersk in the 11th century, but ruined in 1239 during the Mongol invasion.

The main attraction of the monastery is the Trinity Cathedral, which was constructed in 1679 on the project of architect Ioanna Baptist. The cathedral is topped off with seven cupolas.