Chernihiv (Ukrainian: Чернігів Ukrainian pronunciation: [t͡ʃɛrˈnʲiɦiw]) also known as Chernigov (Russian: Черни́гов; IPA: [tɕɪrˈnʲiɡəf], Polish: Czernihów),[2] a historic city in northern Ukraine, serves as the administrative center of the Chernihiv Oblast (province), as well as of the surrounding Chernihiv Raion (district) within the oblast. The city had an estimated population of around 296,008 (as of 2013).

Chernihiv stands on the Desna River to the north-north-east of Kiev. 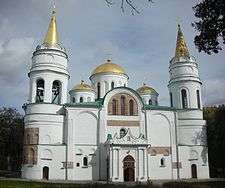 The Saviour Cathedral of Chernihiv (1030s) is the oldest in Ukraine.

Chernihiv was first mentioned in the Rus'-Byzantine Treaty (907) (as Черниговъ (Chernigov)), but the time of establishment is not known. According to the items uncovered by archaeological excavations of a settlement which included artifacts from the Khazar Khaganate, it seems to have existed at least in the 9th century. Towards the end of the 10th century, the city probably had its own rulers. It was there that the Black Grave, one of the largest and earliest royal mounds in Eastern Europe, was excavated in the 19th century.

In the southern portion of the Kievan Rus' the city was the second by importance and wealth.[3] From the early 11th century it was the seat of powerful Grand Principality of Chernigov, whose rulers at times vied for power with Kievan Grand Princes, and often overthrew them and took the primary seat in Kiev for themselves. The grand principality was the largest in Kievan Rus and included not only the Severian towns but even such remote regions as Murom, Ryazan and Tmutarakan. The golden age of Chernihiv, when the city population peaked at 25,000, lasted until 1239 when the city was sacked by the hordes of Batu Khan, which started a long period of relative obscurity.

The area fell under the Grand Duchy of Lithuania in 1353. The city was burned again by Crimean khan Meñli I Giray in 1482 and 1497 and in the 15th to 17th centuries it changed hands several times between Lithuania, Muscovy (1408–1420 and from 1503), and the Polish-Lithuanian Commonwealth (1618–1648), where it was granted Magdeburg rights in 1623 and in 1635 became a seat of Chernihiv Voivodeship. The area's importance increased again in the middle of the 17th century during and after the Khmelnytsky Uprising. In the Hetman State Chernihiv was the city of deployment of Chernihiv Cossack regiment (both a military and territorial unit of the time).

Under the 1667 Treaty of Andrusovo the legal suzerainty of the area was ceded to Tsardom of Russia, with Chernihiv remaining an important center of the autonomous Cossack Hetmanate. With the abolishment of the Hetmanate, the city became an ordinary administrative center of the Russian Empire and a capital of local administrative units. The area in general was ruled by the Governor-General appointed from Saint Petersburg, the imperial capital, and Chernihiv was the capital of local namestnichestvo (province) (from 1782), Malorosiyskaya or Little Russian (from 1797) and Chernigov Governorate (from 1808).

According to the census of 1897, in the city of Chernihiv there were about 11,000 Jews out of the total population of 27,006. Their primary occupations were industrial and commercial. Many tobacco plantations and fruit gardens in the neighborhood were owned by Jews. There were 1,321 Jewish artisans in Chernihiv, including 404 tailors and seamstresses, but the demand for artisan labor was limited to the town. There were 69 Jewish day-laborers, almost exclusively teamsters. But few were engaged in the factories.[4] 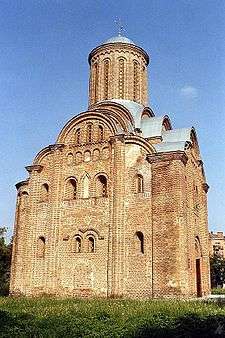 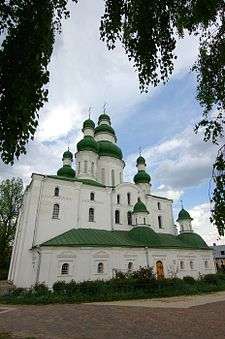 Eletsky monastery cathedral was modeled after that of Kiev Pechersk Lavra. Note the contrast between its austere 12th-century walls and baroque 17th-century domes. 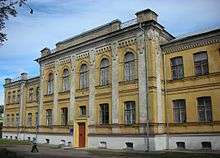 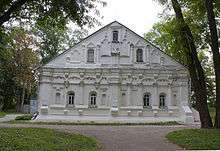 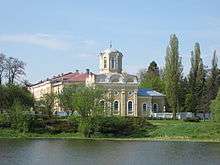 Church of St. Michael and Fedir in Chernihiv

Chernihiv's architectural monuments chronicle two most flourishing periods in the city's history - those of Kievan Rus' (11th and 12th centuries) and of the Cossack Hetmanate (late 17th and early 18th centuries.)

The oldest church in the city and one of the oldest churches in Ukraine is the 5-domed Transfiguration Cathedral, commissioned in the early 1030s by Mstislav the Bold and completed several decades later by his brother, Yaroslav the Wise. The Cathedral of Sts Boris and Gleb, dating from the mid-12th century, was much rebuilt in succeeding periods, before being restored to its original shape in the 20th century. Likewise built in brick, it has a single dome and six pillars. The crowning achievement of Chernihiv masters was the exquisite Pyatnytska Church, constructed at the turn of the 12th and 13th centuries. This graceful building was seriously damaged in the Second World War; its original medieval outlook was reconstructed to a design by Peter Baranovsky.

The earliest residential buildings in the downtown date from the late 17th century, a period when a Cossack regiment was deployed there. Two most representative residences are those of Polkovnyk Lyzohub (1690s) and Polkovnyk Polubutok (18th century). The former mansion, popularly known as the Mazepa House, used to contain the regiment's chancellery. One of the most profusely decorated Cossack structures is undoubtedly the ecclesiastical collegium, surmounted by a bell-tower (1702). The archbishop's residence was constructed nearby in the 1780s. St Catherine Church (1715), with its 5 gilded pear domes, traditional for Ukrainian architecture, is thought to have been intended as a memorial to the regiment's exploits during the storm of Azov in 1696.

All through the most trying periods of its history, Chernihiv retained its ecclesiastical importance as the seat of bishopric or archbishopric. At the outskirts of the modern city lie two ancient cave monasteries, formerly used as the bishops' residences.

The caves of the Eletsky Monastery are said to predate those of the Kiev Pechersk Lavra (Kiev Monastery of the Caves). Its magnificent 6-pillared cathedral was erected at the turn of the 11th and 12th centuries; some traces of its 750-year-old murals may still be seen in the interior. After the domes collapsed in 1611, they were augmented and reconstructed in the Ukrainian baroque style. The wall, monastic cells, and bell-tower all date from the 17th century. The nearby mother superior's house is thought to be the oldest residential building in the Left-Bank Ukraine. The cloister's holiest icon used to be that of Theotokos, who made her epiphany to Svyatoslav of Chernigov on 6 February 1060. The icon, called Eletskaya after the fir wood it was painted upon, was taken to Moscow by Svyatoslav's descendants - Princes Baryatinsky - in 1579.

The nearby cave monastery of St. Elijah and the Holy Trinity features a small eponymous church, which was constructed 800 years ago. The roomy Trinity cathedral, one of the most imposing monuments of the Cossack baroque, was erected between 1679 and 1689. Its refectory, with the adjoining church of Presentation to the Temple, was finished by 1679. There are also the 17th-century towered walls, monastic cells, and the five-tiered belfry from the 1780s.

Other historic abbeys may be visited in the vicinity of Chernihiv; those in Kozelets and Hustynya contain superb samples of Ukrainian national architecture. The area is served by Chernihiv Shestovitsa Airport, and during the Cold War it was the site of Chernigov air base.

Chernihiv is currently twinned with: