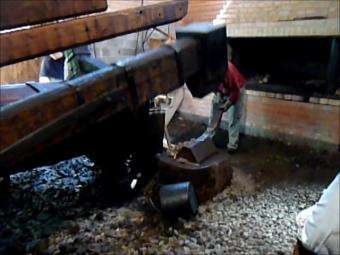 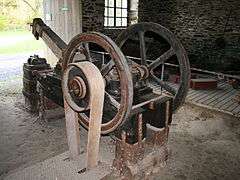 A trip hammer, also known as a helve hammer, is a massive powered hammer used in:

Trip hammers were usually raised by a cam and then released to fall under the force of gravity. Historically, trip hammers were often powered by a water wheel, and are known to have been used in China as long ago as 40 BC or maybe even as far back as the Zhou Dynasty (1050 BC–221 BC)[1] and in medieval Europe by the 12th century. During the Industrial Revolution the trip hammer fell out of favor and was replaced with the power hammer. Often multiple hammers were powered via a set of line shafts, pulleys and belts from a centrally located power supply. 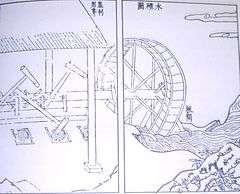 In ancient China, the trip hammer evolved out of the use of the mortar and pestle, which in turn gave rise to the treadle-operated tilt-hammer (Chinese: 碓 Pinyin: dui; Wade-Giles: tui).[2] The latter was a simple device employing a lever and fulcrum (operated by pressure applied by the weight of one's foot to one end), which featured a series of catches or lugs on the main revolving shaft as well.[3] This device enabled the labor of pounding, often in the decorticating and polishing of grain, and avoided manual use of pounding with hand and arm. Although historians assert that its origins may span as far back as the Zhou Dynasty (1050 BC–221 BC), the earliest texts to describe the device are the Jijiupian dictionary of 40 BC, Yang Xiong's text known as the Fangyan of 15 BC, as well as the Xin Lun written by Huan Tan about 20 AD (during the usurpation of Wang Mang).[1] The latter book states that the legendary mythological king known as Fu Xi was the one responsible for the pestle and mortar (which evolved into the tilt-hammer and then trip hammer device). Although the author speaks of the mythological Fu Xi, a passage of his writing gives hint that the waterwheel and trip-hammer were in widespread use by the 1st century AD in China (for water-powered Chinese metallurgy, see Du Shi):

Fu Hsi invented the pestle and mortar, which is so useful, and later on it was cleverly improved in such a way that the whole weight of the body could be used for treading on the tilt-hammer (tui), thus increasing the efficiency ten times. Afterwards the power of animals—donkeys, mules, oxen, and horses—was applied by means of machinery, and water-power too used for pounding, so that the benefit was increased a hundredfold.[4]

With his description, it is seen that the out-of-date Chinese term for pestle and mortar (dui, tui) would soon be replaced with the Chinese term for the water-powered trip-hammer (Chinese: 水碓 Pinyin: shui dui; Wade–Giles: shui tui).[3] The Han Dynasty scholar and poet Ma Rong (79–166 AD) mentioned in one of his poems of hammers 'pounding in the water-echoing caves'.[4] As described in the Hou Han Shu, in 129 AD the official Yu Xu gave a report to Emperor Shun of Han that trip hammers were being exported from Han China to the Western Qiang people by way of canals through the Qilian Mountains.[4] In his Rou Xing Lun, the government official Kong Rong (153–208 AD) remarked that the invention of the trip hammer was an excellent example of a product created by intelligent men during his own age (comparing the relative achievements of the sages of old).[4] During the 3rd century AD, the high government official and engineer Du Yu established the use of combined trip hammer batteries (lian zhi dui), which employed several shafts that were arranged to work off one large waterwheel.[5] In Chinese texts of the 4th century, there are written accounts of men possessing and operating hundreds of trip hammer machines, such as the venerable mathematician Wang Rong (died 306 AD), Deng Yu (died 326 AD), and Shi Chong (died 300 AD), responsible for the operation of hundreds of trip hammers in over thirty governmental districts throughout China.[6] There are numerous references to trip hammers during the Tang Dynasty (618–907 AD) and Song Dynasty (960–1279), and there are Ming Dynasty (1368–1644) references that report the use of trip hammers in papermills of Fujian Province.[7]

Although Chinese trip hammers in China were sometimes powered by the more efficient vertical-set waterwheel, the Chinese often employed the horizontal-set waterwheel in operating trip hammers, along with recumbent hammers.[8] The recumbent hammer was found in Chinese illustrations by 1313 AD, with the publishing of Wang Zhen's Nong Shu book on ancient and contemporary (medieval) metallurgy in China.[9] There were also illustrations of trip hammers in an encyclopedia of 1637, written by Song Yingxing (1587–1666).[10]

The main components for water-powered trip hammers - water wheels, cams, and hammers - were already known in Hellenistic times.[11] Ancient cams are in evidence in early water-powered automata from the 3rd century BC.[12] A passage in the Natural History of the Roman scholar Pliny (NH 18.23) indicates that water-driven pestles had become widespread in Italy by the 1st century AD:

The greater part of Italy uses an unshod pestle and also wheels which water turns as it flows past, and a trip-hammer [mola].[12] These trip-hammers were used for the pounding and hulling of grain.[12]

Grain-pounders with pestles, as well as ordinary watermills, are also attested as late as the middle of the 5th century in a monastery founded by Romanus of Condat in the remote Jura region, indicating that the knowledge of trip hammers continued into the early Middle Ages.[12] Apart from agricultural processing, archaeological evidence also strongly suggests the existence of trip hammers in Roman metal working. In Ickham in Kent, a large metal hammer-head with mechanical deformations was excavated in an area where several Roman water-mills and metal waste dumps have also been traced.[12]

The widest application of trip hammers, however, seems to have occurred in Roman mining, where ore from deep veins was first crushed into small pieces for further processing.[13] Here, the regularity and spacing of large indentations on stone anvils indicate the use of cam-operated ore stamps, much like the devices of later medieval mining.[13][14] Such abraded stone anvils have been found at numerous Roman silver and gold mines in Western Europe, including at Dolaucothi (Wales), and on the Iberian peninsula,[13][14][15] where the datable examples are from the 1st and 2nd century AD.[16] At Dolaucothi, these trip-hammers were hydraulic-driven and possibly also at other Roman mining sites, where the large scale use of the hushing and ground sluicing technique meant that large amounts of water were directly available for powering the machines.[13][17]

Later, Muslim engineers introduced the use of trip hammers in the production of paper, replacing the traditional Chinese mortar and pestle method of papermaking.[18]

Water-powered and mechanised trip hammers reappeared in medieval Europe by the 12th century. Their use was described in medieval written sources of Styria (in modern-day Austria), written in 1135 and another in 1175 AD.[19] Both texts mentioned the use of vertical stamp mills for ore-crushing.[19] Medieval French sources of the years 1116 and 1249 both record the use of mechanised trip hammers used in the forging of wrought iron.[19] Medieval European trip hammers by the 15th century were most often in the shape of the vertical pestle stamp-mill, although they employed more frequent use of the vertical waterwheel than earlier Chinese versions (which often used the horizontal waterwheel).[7] The well-known Renaissance artist and inventor Leonardo da Vinci often sketched trip hammers for use in forges and even file-cutting machinery, those of the vertical pestle stamp-mill type.[9] The oldest depicted European illustration of a martinet forge-hammer is perhaps the Historia de Gentibus Septentrionalibus of Olaus Magnus, dated to 1565 AD.[9] In this woodcut image, there is the scene of three martinets and a waterwheel working wood and leather bellows of the Osmund Bloomery furnace.[9] The recumbrent hammer was first depicted in European artwork in an illustration by Sandrart and Zonca (dated 1621 AD).[9]

Most types of trip hammers were used, all requiring artificial power to lift them. They fall into two types, helve hammers and drop hammers.

A helve hammer has the head mounted at the end of a recumbent helve. The choice of which of the kinds, listed below, should be used in a particular context may depend on the strain that its operation imposed on the helve. This was normally of wood, mounted in a cast iron ring (called the hurst) where it pivoted. However, in the 19th century the heaviest helves were sometimes a single casting, incorporating the hurst. 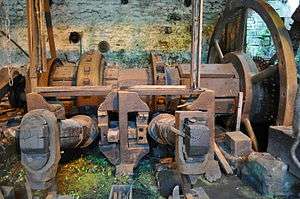 The tilt hammer or tail helve hammer has a pivot at the centre of the helve on which it is mounted, and is lifted by pushing the opposite end to the head downwards. In practice, the head on such hammers seems to have been limited to one hundredweight (about 50 kg), but a very rapid stroke rate was possible. This made it suitable for drawing iron down to small sizes suitable for the cutlery trades. There were therefore many such forges known as 'tilts' around Sheffield. They were also used in brass battery works for making brass (or copper) pots and pans. In battery works (at least) it was possible for one power source to operate several hammers. In Germany, tilt hammers of up to 300 kg were used in hammer mills to forge iron. Surviving, working hammers, powered by water wheels, may be seen, for example, at the Frohnauer Hammer in the Ore Mountains.

The belly helve hammer was the kind normally found in a finery forge, used for making pig iron into forgeable bar iron. This was lifted by cams striking the helve between the pivot and the head. The head usually weighted quarter of a ton. This was probably the case because the strain on a wooden helve would have been too great if the head were heavier.

The nose helve hammer seems to have been unusual until the late 18th or early 19th century. This was lifted beyond the head. Surviving nosehelves[20] and those in pictures[21] appear to be of cast iron. In the drop hammer, the head is mounted on a vertical shaft, which is lifted artificially and falls by gravity.

The stamp mill for breaking up ore has been used since at least the 16th century. It consists of a number of iron stamps each mounted in a wooden pole or iron shaft, which are lifted successively by cams.

The steam-powered drop hammer replaced the helve hammer (at least for the largest forgings). James Nasmyth invented it in 1839 and patented in 1842. However, by then forging had become less important for the iron industry, following the improvements to the rolling mill that went along with the adoption of puddling from the end of the 18th century. Nevertheless, hammers continued to be needed for shingling.