The Diamond Sutra of the Chinese Tang Dynasty, the oldest dated printed book in the world, found at Dunhuang, from 868 CE. 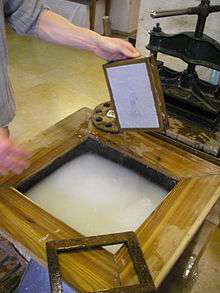 A sheet of fibres which were just collected from the liquid suspension with the screen. The next steps are to press it and to dry it.

Papermaking is the process of making paper, a material which is used universally today for writing and packaging.

In papermaking, a dilute suspension of fibres in water is drained through a screen, so that a mat of randomly interwoven fibres is laid down. Water is removed from this mat of fibres by pressing and drying to make paper. Since the invention of the Fourdrinier machine in the 19th century, most paper has been made from wood pulp because of cost. But other fibre sources such as cotton and textiles are used for high-quality papers. One common measure of a paper's quality is its non-wood-pulp content, e.g., 25% cotton, 50% rag, etc. Previously, paper was made up of rags and hemp as well as other materials. 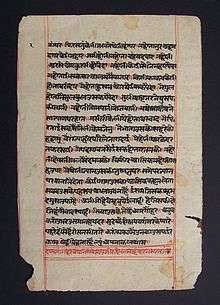 Ancient Sanskrit on Hemp based Paper. Hemp Fiber was commonly used in the production of paper from 200 BCE to the Late 1800's. 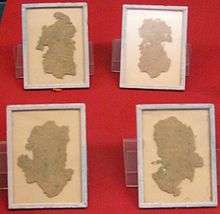 Papermaking is known to have been traced back to China about 105 CE, when Cai Lun, an official attached to the Imperial court during the Han Dynasty (202 BCE-220 CE), created a sheet of paper using mulberry and other bast fibres along with fishnets, old rags, and hemp waste.[1] However a recent archaeological discovery has been reported from Gansu province of paper with legible Chinese writings on it dating from 8 BCE,[2] while hempen paper had been used in China for wrapping and padding since the eighth century BCE.[3] Paper used as a writing medium became widespread by the 3rd century[4] and, by the 6th century, toilet paper was starting to be used in China as well.[5] During the Tang Dynasty (618-907 CE) paper was folded and sewn into square bags to preserve the flavour of tea,[3] while the later Song Dynasty (960-1279 CE) was the first government to issue paper-printed money.

In the 8th century, paper spread to the Islamic world, where the rudimentary and laborious process of papermaking was refined and machinery was designed for bulk manufacturing of paper. Production began in Samarkand, Baghdad, Damascus, Cairo, Morocco then Muslim Spain. In Baghdad, this was under the supervision of the Grand Vizier Ja'far ibn Yahya. In general, Muslims invented a method to make a thicker sheet of paper. This helped transform papermaking from an art into a major industry.[6][7] The earliest use of water-powered mills in paper production, specifically the use of pulp mills for preparing the pulp for papermaking, dates back to Samarkand in the 8th century.[8] The earliest references to paper mills also come from the medieval Islamic world, where they were first noted in the 9th century by Arabic geographers in Damascus.[9] Papermaking was diffused across the Islamic world, from where it was diffused further west into Europe.[10]

Modern papermaking began in the early 19th century in Europe with the development of the Fourdrinier machine, which produces a continuous roll of paper rather than individual sheets. These machines are considerably large, up to 150 meters in length, produce up to 10 meters wide sheet, and running around 100 km/h. In 1844, Canadian inventor Charles Fenerty and German inventor F.G. Keller had invented the machine and associated process to make use of wood pulp in papermaking.[11] This would end the nearly 2,000-year use of pulped rags and start a new era for the production of newsprint and eventually almost all paper was made out of pulped wood.

Papermaking, regardless of the scale on which it is done, involves making a dilute suspension of fibres in water and allowing this suspension to drain through a screen, so that a mat of randomly interwoven fibres is laid down. Water is then removed from this mat of fibres using a press.

The method of manual papermaking changed very little over time, despite advances in technologies. The process of manufacturing handmade paper can be generalized into five steps:

Screening the fibre involves using a mesh made from non-corroding and inert material, such as aluminium, which is stretched in a wooden frame similar to that of a window. The size of the paper is governed by the size of the frame. This tool is then completely submerged in the solution vertically and drawn out horizontally to ensure a uniform coating of the wire mesh. Excess water is then removed and the wet mat of fibre laid on top of a damp cloth. The process is repeated for the required number of sheets. This stack of wet mats is then pressed in a hydraulic press very gently to ensure the fibre does not squeeze out. The fairly damp fibre is then dried using a variety of methods, such as vacuum drying or simply air drying. Sometimes, the individual sheet is rolled to flatten, harden, and refine the surface. Finally, the paper is then cut to the desired shape or the standard shape (A4, letter, legal, etc.) and packed.[12]

The wooden frame is called a "deckle". The deckle leaves the edges of the paper slightly irregular and wavy, called "deckle edges", one of the indications that the paper was made by hand. Deckle-edged paper is occasionally mechanically imitated today to create the impression of old-fashioned luxury. The impressions in paper caused by the wires in the screen that run sideways are called "laid lines" and the impressions made, usually from top to bottom, by the wires holding the sideways wires together are called "chain lines". Watermarks are created by weaving a design into the wires in the mould. This is essentially true of Oriental moulds made of other substances, such as bamboo. Handmade paper generally folds and tears more evenly along the laid lines.

Handmade paper is also prepared in laboratories to study papermaking and in paper mills to check the quality of the production process. The "handsheets" made according to TAPPI Standard T 205 [13] are circular sheets 15.9 cm (6.25 in) in diameter and are tested for paper characteristics such as brightness, strength and degree of sizing.[14]

A modern paper mill is divided into several sections, roughly corresponding to the processes involved in making handmade paper. Pulp is refined and mixed in water with other additives to make a pulp slurry. The head-box of the paper machine (Fourdrinier machine) distributes the slurry onto a moving continuous screen, water drains from the slurry (by gravity or under vacuum), the wet paper sheet goes through presses and dries, and finally rolls into large rolls. The outcome often weighs several tons.

Another type of paper machine makes use of a cylinder mould that rotates while partially immersed in a vat of dilute pulp. The pulp is picked up by the wire and covers the mould as it rises out of the vat. A couch roller is pressed against the mould to smooth out the pulp, and picks the wet sheet off the mould.

Key inventors include Henry Fourdrinier, Heinrich Voelter and Carl Daniel Ekman, among others.

In the beginning of Western papermaking, paper size was fairly standard. A page of paper is referred to as a leaf. When a leaf was printed on without being folded, the size was referred to as folio (meaning leaf). It was roughly equal to the size of a small newspaper sheet. ("Folio" can also refer to other sizes - see paper sizes.)

A Folio folded once produces two leaves (or four pages), and the size of these leaves was referred to as quarto (4to) (about 230 x 280 mm).

If the original sheet was folded in half again, the result was eight pages, referred to as octavo (8vo), which is roughly the size of an average modern novel. An octavo folding produces four leaves; the first two and the second two will be joined at the top by the first fold. The top edge is usually trimmed to make it possible to look freely at each side of the leaf. Sometimes books are found that have not been trimmed on the top, and these pages are referred to as unopened.

Smaller books are produced by folding the leaves again to produce 16 pages, known as a sixteen-mo (16mo) (originally sextodecimo). Other folding arrangements produce yet smaller books such as the thirty-two-mo (32mo) (duo et tricensimo).

When a standard-sized octavo book is produced by twice folding a large leaf, two leaves joined at the top will be contained in the resulting fold (which ends up in the gulley between the pages). This group of eight numberable pages is called a signature or a gathering. Traditionally, printed signatures were stacked on top of each other in a sewing frame and each signature was sewn through the inner fold to the signature on top of it. The sewing ran around leather bands or fabric tapes along the backs of the signatures to stabilize the pile of signatures. The leather bands originally used in the West to stabilize the backs of sewn books appear as a number of ridges under the leather on the spine of leather books. The ends of the leather strips or fabric bands were sewn or glued onto the cover boards and reinforced the hinging of the book in its covers. 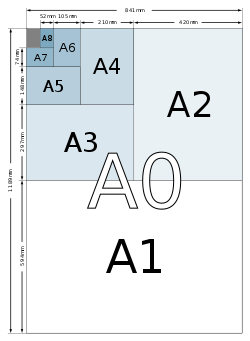 While opinions and speculation abound on exact reasons for standardized paper sizes, the most revealing feature of popular sizes (such as Letter and ISO 216 sizes) is that they conform not to some arbitrary device dimension, but that the length of the paper is chosen to be the width of the page times the square root of two (≈1.414). This feature allowed for a large page to be cut in half and the resulting two pages to have the same aspect ratio as the original piece (just with half the size). Repeated cuts can be made to reduce the entire sheet to one size of pages without wasted paper. This format was formalized by ISO 216 however such logic dictated efficient paper sizes long before the ISO was created. For example, traditional 8.5"x11" Letter paper is within a few millimetres of A4 paper (ISO 216) dimensions. While paper sizes "may" have been chosen based on the size of original frames, the frames themselves were chosen to make page reduction efficient without distorting the aspect ratio of the pages regardless of final size chosen. However, there are paper sizes that do not conform to this idea when specific applications are needed.

Vatmen Paper was a type of paper made in the Netherlands that was 17 inches (430 mm) wide and 44 inches (1,100 mm) long. 44 inches was (reputedly) chosen because that is how far the papermaker could stretch his arm. A single vatman can generally handle a mould and deckle which produce up to a 25 inches (640 mm) wide sheet.