A trolling motor is a self-contained unit that includes an electric motor, propeller and controls, and is affixed to an angler's boat, either at the bow or stern. A gasoline-powered outboard used in trolling, if it is not the vessel's primary source of propulsion, may also be referred to as a trolling motor. Trolling motors are often lifted from the water to reduce drag when the boat's primary engine is in operation.

An 1895 article in Scientific American entitled "A Portable Electric Propeller for Boats" stated: "Briefly described, it consists of a movable tube which is hinged at the stern of the boat, much as an oar is used in sculling. The tube contains a flexible shaft formed of three coils of phosphor bronz. This tube extends down and out into the water, where it carries a propeller, and at the inboard end an electric Motor is attached, which is itself driven by batteries." It was invented and sold by the Electric Boat company.[1][2]

The electric trolling motor was invented by O.G.Schmidt in 1934[3] in Fargo, North Dakota, when he took a starter motor from a Ford Model A, added a flexible shaft, and a propeller. Because his manufacturing company was near the Minnesota/North Dakota border, he decided to call the new company Minn Kota. The company still is a major manufacturer of trolling motors. 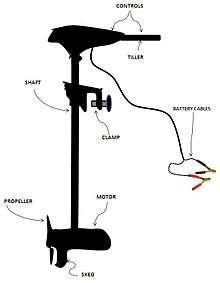 Diagram of a hand-controlled trolling motor. 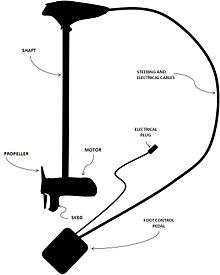 Diagram of a foot-controlled trolling motor.

Electric trolling motors are commonly rated by their propulsion force when running at motor's full speed (given in pounds thrust), and not by horsepower like gas engines, nor by electric motor characteristics such as drawn power or current.

Currents stronger than 60A are rarely used, since 60A current already requires 8 AWG or even thicker cables. Cables are dimensioned to prevent 5% or higher voltage drop. Larger voltage drop could lead to excessive power losses and increased danger of fire.