In naval architecture, a transom is the surface that forms the stern of a vessel. Transoms may be flat or curved and they may be vertical, raked forward, also known as a retroussé or reverse transom, angling forward (toward the bow) from the waterline to the deck, or raked aft, often simply called "raked", angling in the other direction.[1][2][3] The bottom tip of the transom can be approximately on the waterline, in which case the stern of the vessel is referred to as a "transom stern", or the hull can continue so that the centreline is well above the waterline before terminating in a transom, in which case it is referred to as a "counter stern"[4] or "cutaway stern."[5] 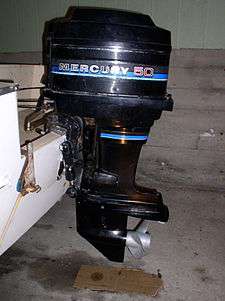 The term is probably a corruption of Latin transtrum, a thwart, in a boat; equivalents are French traverse, croisillon, German Heckspiegel.[7]

The expression over the transom is rooted in the architectural meaning of the word. See: Transom (architectural).

This article is issued from Wikipedia - version of the 7/15/2014. The text is available under the Creative Commons Attribution/Share Alike but additional terms may apply for the media files.