This is a Chinese name; the family name is Tung.

As the eldest son of Chinese shipping magnate Tung Chao Yung who founded Orient Overseas Container Line (OOCL), Tung took over the family business after the death of his father in 1981. Four years later, OOCL teetered on the edge of bankruptcy in 1985, and the business was saved by the government of the People's Republic of China through Henry Fok in 1986.

After the transfer of Hong Kong's sovereignty from the United Kingdom to the People's Republic of China, he became the first head of government on 1 July 1997, and took his unfinished second term in 2002.[7]

Dissatisfaction among the public towards Tung grew throughout his tenure; in 2003, more than 500,000 protesters demanded that Tung step down. Tung resigned on 10 March 2005, three years into his second five-year term.

He is currently a Vice Chairman of the National Committee of the Chinese People's Political Consultative Conference[8] and remains active in public service. In 2008, he formed the China-United States Exchange Foundation, a group that aims to promote better understanding between the two countries.

A graduate of the University of Liverpool, Tung was known as a conservative businessman with traditional Chinese values and strong connections with the Chinese Government.

Before 1997, he was appointed by the Hong Kong British government to take a seat in Executive Council of Hong Kong.

In early 1997, Tung saw his victory in the first Chief Executive election,[9] in the voting conducted by 400 committees of electoral college whose members are appointed by the Chinese Government.

The government pledged to focus on three policy areas: housing, the elderly, and education.[10] Measures on housing included a pledge to provide 85,000 housing flats each year so as to resolve the problems of soaring property prices. The Asian financial crisis that hit Hong Kong in months after Tung took office made this objective almost immediately redundant and, in fact, it was a collapse in property prices that became a far more pressing problem in the years between 1998 and 2002.

Tung took office on 1 July 1997. His first term was significantly – and negatively – impacted by the Asian financial crisis and there was criticism by the general public of his style of governance. Job losses and plummeting values in the stock and property markets, combined with controversial economic policies (which were called crony capitalism at the time), the people of Hong Kong started to question Tung and the HKSAR government.

During Tung's first term the government proposed a number of controversial infrastructure and reformation projects including technology park, a science park, a Chinese medicine centre and the Disney theme park. Tung's decisions were somewhat questioned by the central government, including Jiang Zemin, former General Secretary of the Communist Party of China.

Questions arose over Tung's decision to[11] grant the Cyberport Project[12] to Richard Li, son of tycoon Li Ka-shing, without the benefit of an open tender.

The way in which[13] the Walt Disney Company's land grant for its theme park on a 50-year lease apparently disrupted the market, and for studying the possibility of setting up a casino in Hong Kong. His administration was seen as troubled, particularly during the confusion of the first days of the new airport, the mis-handling of the avian influenza epidemic, declining standards due to education reforms (specifically teaching in the Cantonese "mother tongue" and mandatory English examination for teachers), the Right of abode issue,[14] and his disagreement of political views[15] with the popular then Chief Secretary, Anson Chan.[16] Tung's popularity plummeted with the economy, to 47% satisfaction at the end of August 2002.[17]

In an attempt to resolve the difficulties in governance, Tung reformed the structure of government substantially starting from his second term in 2002.[19] In a system popularly called the Principal Officials Accountability system, all principal officials, including the Chief Secretary, Financial Secretary, Secretary for Justice and head of government bureaux would no longer be politically neutral career civil servants. Instead, they would all be political appointees chosen by the Chief Executive. The system was portrayed as the key to solve previous administrative problems, notably the cooperation of high-ranking civil servants with the Chief Executive. Under the new system, all heads of bureau became members of the Executive Council, and came directly under the Chief Executive instead of the Chief Secretary or the Financial Secretary. The heads of the Liberal Party and Democratic Alliance for the Betterment of Hong Kong, two pro-government parties in the Legislative Council, were also appointed into the Executive Council to form a "ruling alliance," a de facto coalition.[20] This practically shut out the pro-democratic parties and individuals.

Crisis of governance in 2003

The first major move of Tung in his second term was to push for legislation to implement Article 23 of the Hong Kong Basic Law in September 2002. However, the initiative drew a hostile response from the pro-democratic camp, lawyers, journalists, religious leaders and human rights organisations.[21] This stoked public concerns that the freedoms they enjoyed would deteriorate. The sentiment, together with other factors such as the SARS epidemic in early 2003, when the government was criticised for its slow response, strained hospital services and the unexpected death toll, resulted in the largest mass demonstration since the establishment of HKSAR, with an estimated 500,000 people (out of the population of 6,800,000) marching on 1 July 2003. Many demanded Tung to step down.[22]

In response to the protests, the leader of the Liberal Party, James Tien, resigned from the Executive Council on evening 6 July, signifying the withdrawal of the party's support for the bill implementing Article 23. As a result, the government had to postpone and later withdraw the bill from the legislative agenda.[23] On 17 July 2003, Regina Ip, the then Secretary for Security who was responsible for implementing Article 23, resigned for personal reasons. Another Principal Official, Finance Secretary Antony Leung, who earlier suffered from a scandal over his purchase of a luxury vehicle weeks prior to his introduction of a car sales tax, which was dubbed as the Lexusgate scandal, resigned on the same day.[24] 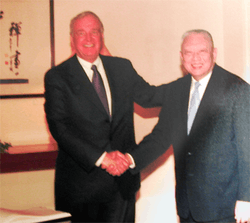 Tung Chee Hwa shaking hands with Paul Martin, the Prime Minister of Canada at the Government House on 22 January 2005.

During the debate over Hong Kong's constitutional development, Tung was criticised as not reflecting effectively the views of the general population to push for 2007/08 universal suffrage to the People's Republic of China government.[25] Although the primary target of popular opposition was the PRC government, Tung's lack of support for the pro-democratic camp resulted in his low approval ratings.[26]

In late 2003, in an attempt to bring back visitors to Hong Kong, Government agency InvestHK was mandated to sponsor the Harbour Fest music festival in October, organised by the American Chamber of Commerce. The result was a series of poorly attended concerts, HK$100m bill for the taxpayers, with the Government, InvestHK and the American Chamber of Commerce blaming each other for the flop.[27] Tung's cabinet suffered another blow in July 2004 when another Principal Official, the Secretary for Health, Welfare & Food, Dr. Yeoh Eng-kiong, resigned on 7 July to take political responsibility for the government's handling of the SARS outbreak in 2003,[28] after the release of the investigation report of LegCo over the issue.

In late-2004, the Tung administration experienced another embarrassment as the large planned sale of government-owned real estate, The Link REIT, was cancelled at the last moment by a lawsuit by a tenant from an affected estate.[29]

With the subsequent improvement in the economy over 2004, unemployment fell and the long period of deflation[30] ended. This resulted in a decrease in public discontent as the government's popularity improved, and popular support for the democratic movement dwindled with a protest in January attracting a mere few thousand protesters compared to the 1 July protests of 2003 and 2004. However, the popularity of Tung himself remained low compared to his deputies including Donald Tsang and Henry Tang.[31]

Tung's reputation suffered further damage when Hu Jintao gave him a humiliating public dressing-down for poor governance in December 2004. Official sources specifically cited the poor handling of the Link REIT listing, the West Kowloon cultural project, the Hung Hom flats episode.[32] Tung himself denied it was a dressing-down, and insisted that he retained the central government's support, although he and the rest of the government were asked to examine their past inadequacies.[33] Hu's words, however, were thinly veiled criticism. Nevertheless, in his January 2005 Policy Address, Tung gave a rather critical verdict on his own performance.

The speculation which was running rife in the weeks in the run-up to his actual resignation, and its intensity, continued to perpetuate the impression of Tung's "weakness" and "confusion".[34] Prior to Tung's resignation, in mid-February Stanley Ho, a tycoon with close ties with Beijing, had already commented on the possible candidates for the next Chief Executive and personally endorsed Donald Tsang.[35] This started rumours that Tung would be nominated to the election of vice chairman of Chinese People's Political Consultative Conference (CPPCC) of the PRC. On the night of 27 February 2005, it was revealed that he and nine other persons would be appointed as new members to the CPPCC. All the local newspapers, except for the three controlled by the PRC government, namely Ta Kung Pao, Wen Wei Po and Hong Kong Commercial Daily, went to the presses preemptively on the morning of 2 March with the headline "Tung Resigns".[36] Tung declined to comment when questioned by journalists waiting at the government headquarters.

On 10 March 2005, Tung assembled a press conference at the Central Government Offices and announced that he had tendered his resignation due to "health problems".[37] After flying to Beijing on 11 March, Tung was elected Vice Chairman of the Chinese People's Political Consultative Conference (CPPCC) on 12 March 2005, the last day of CPPCC annual meeting.

His resignation sparked a constitutional debate of whether his successor should fill his remaining term of two years, or start a new term of five years.[38] Tung was mostly chosen by the PRC due to his business background as well as owing Beijing for saving him from bankruptcy with a US$100 million loan.[39]

In 2008, Tung formed the China-United States Exchange Foundation, a group that aims to promote better understanding between the two countries.[40]

Tung was awarded a Grand Bauhinia Medal in 2006. [41][42] He was also awarded an Honorary Doctorate degree in Social Sciences (D.S.Sc) by the Hong Kong University of Science and Technology on 10 November 2006.