Government House (Chinese: 香港禮賓府; formerly 督憲府/香港總督府/港督府), located on Government Hill in the Central District of Hong Kong Island, is the official residence of the Chief Executive of Hong Kong. The building was constructed in 1855 as a Colonial Renaissance style, but was significantly remodelled during Japanese occupation, resulting in the current hybrid Japanese-neoclassical form. 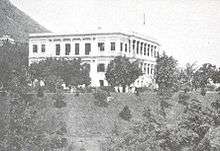 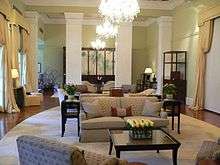 Government House was designed by Charles St George Cleverly. Construction started in 1851, eight years after Hong Kong was declared a British colony, and took four years to complete. The first governor to live there was Sir John Bowring, the fourth governor of the territory. The last one was the last governor, Chris Patten.

During the Japanese occupation during World War II (1941–1945), it was occupied by the Japanese Military Governor. The form of the building changed to a hybrid Japanese/neoclassical image by Seichi Fujimura in 1944, primarily through the addition of a tower and roof elements.

Government House also housed the Legislative Council of Hong Kong from 1855 to the 1930s. The Council used the ballroom from 1891 onward.

After the handover of Hong Kong to the People's Republic of China in 1997, the House became a reception for ceremonies (such as the conferring of Honours and formal banquets). Tung Chee Hwa, the first Chief Executive, did not reside in Government House.

Donald Tsang, the second Chief Executive moved into Government House in January 2006, following extensive renovations. The Standard criticised that the renovation cost was estimated at HK$14.5 million, including a sum of HK$300,000 allocated to a new fish pond designed to accommodate Tsang's collection of koi.[1]

The main entrance of the house faces south towards Victoria Peak. Down on the northern side is the Former Central Government Offices, where most government secretariat offices were situated until 2011.

Government House has a front lawn and a back garden. Eminent among the plants in the garden are the numerous azaleas that come to full bloom in spring. Inside, the ballroom, the drawing room, the dining room and the conference room are frequently used for receiving guests at official functions.

At the front entrance on Upper Albert Road, there are two buildings with an iron gate known as the Gate Lodges. The lodges once housed the Government House Guards, who stood in front of the house and protected the Governor of Hong Kong. Various units of the British Army stationed in Hong Kong were used as guard units.

Following the handover in 1997, officers of the Hong Kong Police have guarded the building. 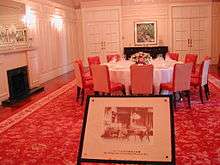 The garden of Government House is opened twice a year to the public. At least one will be arranged in spring to enable members of the public to share the delight in viewing the full bloom of the azaleas. Visitors are usually allowed to pass by the drawing room, dining room and ballroom where key official functions are held.

The open days are generally arranged during weekends. Dates are announced through press releases one week in advance. No admission fee is charged.

In 1900, Mountain Lodge, on Victoria Peak, was built as an alternate summer home for the Governor, a role it retained until 1934. The building survived until 1946, but today only the Gate Lodge and Victoria Peak Garden remain. One of three "GOVERNOR'S RESIDENCE" marking stones of the former Mountain Lodge was erected in the small flower bed in front of the entrance of the Government House in 1980.

From 1934, Fanling Lodge, in the New Territories, was used as a summer residence for the Governor. It has retained this role, and is now the alternate residence of the Chief Executive of Hong Kong. The lodge is occupied mainly at weekends and on holidays.

According to The New York Times, alleged bad feng shui was the reason Tung Chee Hwa refused to live or work in Government House upon becoming Chief Executive. Ironically, during his terms as Chief Executive, he was still heavily criticised by Hong Kongers, and his popularity fell well below 40% by the time of his resignation.[2]

The Standard believed Tung's reason to stay away from the mansion was political: a subtle effort to reduce the age-old British legacy over Hong Kong. Other sources mention that "it was the warning about spying devices [installed throughout Government House] that scared him away".[3]