At Hampton High School, in Hampton, Virginia, Taylor was a three-sport athlete in football, basketball and track. In football, he led the team as a quarterback, while also becoming the team's kick returner and safety. During his 4 years as starter, he led the team to a 34-4 record. He accumulated 7,690 yards of offense and scored 100 total touchdowns, breaking every passing record of previous standout Anthony Mastrocola. He passed for 5,144 yards and 44 touchdowns, while rushing for 2,546 yards and 56 scores.[2]

When Taylor graduated from Hampton in 2007, he was rated as the No. 1 dual-threat quarterback at Rivals.com. ESPN.com rated him the No. 3 overall quarterback, while Scout.com said he's the nation's seventh-best passer.[3] Taylor, who is 6'1" and 200 pounds, ran a 4.55-second 40 yard dash.

Taylor narrowed his final two choices down to Virginia Tech and the University of Florida, and eventually chose to attend Virginia Tech.

During Taylor's freshman year, he shared time for most of the season with the junior quarterback Sean Glennon.

His first action of college football came in the game against the LSU Tigers on September 8, 2007. In that game, Taylor completed 7 of 18 passes for 62 yards, rushed for 44 yards on nine attempts including his first collegiate touchdown.[4] After that game, Tyrod was named the starter by head coach Frank Beamer. In his first collegiate start against Ohio University, Tyrod threw for 287 yards, adding a rushing touchdown.[5]

One of Taylor's early accolades was rushing for 92 yards and a touchdown as well as passing for 204 yards and 2 touchdowns in leading Virginia Tech to its first victory against Florida State in two decades. The win was the first ever for Frank Beamer against FSU coach Bobby Bowden.

On October 13, in the second quarter of a game against Duke University, Taylor suffered a high ankle sprain which forced him to miss two games. Taylor returned in a game at Georgia Tech, but did not start for the rest of the season and rotated time with starter Sean Glennon.

Throughout the season, he accumulated 1,356 total yards, including 927 passing and 429 rushing. He completed 72 of 134 passing attempts, for a completion percentage of 53.7. He scored 11 touchdowns during the year, five passing and six rushing. 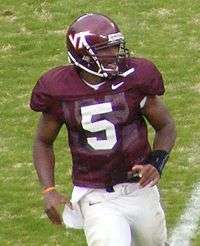 Coming into the 2008 Season, Taylor was intended to be redshirted. After Virginia Tech's loss to East Carolina University though, his redshirt was taken off due to Tech's need for more offense. Taylor's first appearance of the season came in the second game of the season against Furman, where he rushed for 112 yards and a touchdown. His first sophomore start came in the following week vs. Georgia Tech.

After starting every game of the 2008 season leading up to the Florida State game on October 25, Tyrod suffered a high ankle sprain on the first play of the VT-FSU game. Sean Glennon relieved Taylor at the quarterback position after this setback. While Glennon got the start versus Miami, Taylor split time with Glennon and led a crucial fourth quarter to make it a two point game 16-14. However, he was sacked in a crucial 4th and 3 with less than two minutes to go. After the loss, Taylor started against Duke. After committing 5 turnovers in the first half, he was pulled from the game and replaced by Sean Glennon. Taylor then started next week at UVA. He performed well including a 73 yard run. He threw 12 for 18 for 137 yards 1 touchdown while rushing 16 times for 137 yards. He then started in the ACC Championship Game win over Boston College and was named the ACC Championship Game MVP. On January 1, 2009 he led the Hokies to a 20-7 victory over the Cincinnati Bearcats in the 2009 Orange Bowl.

During his junior season, Taylor led the Hokies to a 9-3 regular season record and a 2nd place finish in the Coastal Division of the ACC. The Hokies played the Tennessee Volunteers in the 2009 Chick-fil-A Bowl and won 37-14, finishing with a final record of 10-3. After climbing as high as 4th in the rankings, Tech lost back to back games against Georgia Tech and North Carolina, but finished the season ranked 10th in both the AP and USA Today Top 25 polls. Taylor holds a 23-5 career record at Virginia Tech, which is the second most wins of all time for a starting quarterback at Virginia Tech. 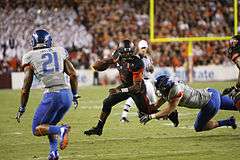 Taylor's senior season began with two heartbreaking losses to Boise State at FedExField and at home to Division I-FCS James Madison. Taylor was 15-of-22 for 186 yards and two touchdowns, along with 73 yards on the ground, against Boise State, but was unable to respond following a Broncos score with 1:03 remaining.[6] However, Taylor ultimately led the Hokies to a remarkable turnaround season, winning 11 in a row after the 0-2 start. The 2010 Hokies became the first ACC team to finish with an undefeated 8-0 record in ACC play in 10 years. They became ACC Champions for the 4th time in 7 seasons in the ACC with a 44-33 win over Florida State in the 2010 ACC Championship Game in Charlotte. Taylor finished the regular season as ACC Player of the Year and ACC Championship Game Most Valuable Player.

Taylor participated in the 2011 East-West Shrine Game. He completed four of his five passes for 59 yards.

In the 2011 NFL Draft, Taylor was drafted in the sixth round with the 180th pick by the Baltimore Ravens. The Ravens played him at quarterback in spite of the fact many of the other 31 teams believed he would better be suited at receiver instead. He orchestrated the game winning touchdown drive in preseason week 3. He hit Brandon Jones for a nine-yard touchdown pass with 37 seconds remaining. After making the 53-man final roster, Taylor would win the backup quarterback position and spend his rookie season behind starting quarterback Joe Flacco.

In his 1st pre-season start against the Atlanta Falcons, Taylor left with a shoulder injury. Early tests revealed no separation and the rookie's injury was characterized as a contusion.[8]

Taylor played in his first regular season on December 4, 2011 in a victory over the Cleveland Browns. He rushed for a two yard gain.[9] He appeared on December 18 and threw his first-ever regular season pass, an 18-yard touchdown. He also lined up as a wide receiver for one play against the Indianapolis Colts.

On December 30, 2012, Flacco was rested for most of the Week 17 game against the Cincinnati Bengals, offering Taylor significant playing time. Taylor would score his first career touchdown on a 1-yard bootleg in the fourth quarter. However, Taylor also threw a crucial interception to Carlos Dunlap, which Dunlap returned for a touchdown. The Ravens would lose the game against the Bengals 23–17,[10] but Taylor—albeit as a backup once again—went on to earn a championship when the Ravens eventually won Super Bowl XLVII over the 49ers.

Taylor had a decent preseason in 2013 when he completed 21 of 36 passes for 263 yards and 4 touchdowns with 2 interceptions. He also showed his versatility as a runner using designed runs and scrambles while rushing for 66 yards on 15 carries. His strong preseason performance allowed him to keep his job as the Ravens backup quarterback for the third straight season.

Taylor didn't see any action in 2013 until Week 10, in a win against the Cincinnati Bengals. He ran an end-around handoff from Flacco for a gain of 18 yards, which was the longest run by any Ravens player in that game. In Week 12 against the New York Jets, Taylor played 12 total snaps, 5 at quarterback. He gained 7 yards on 4 carries though he did have a 17 yard first down run in the first quarter. His total yardage was brought down by two second half runs where he lost 13 yards. He also had 1 reception for 6 yards. On December 22, 2013, Taylor would enter the game for Joe Flacco during a blowout loss to the New England Patriots. On his very first snap, Gino Gradkowski snapped it too far to the right, and was recovered by New England for a touchdown. He finished the 41-7 loss, completing 1 of 4 passes for 2-yards and an interception that the Patriots defense returned for a touchdown.

Taylor in his last season with the Ravens

Taylor's only action in 2014 was during a week 6 blowout win against the Tampa Bay Buccaneers. Taylor came in during the fourth quarter to relieve Joe Flacco.

On March 12, 2015, Taylor signed a 3-year, $3.35 million contract with the Buffalo Bills.[11] On August 31, 2015, Taylor was named starting quarterback of the Bills for the 2015 season by head coach Rex Ryan, beating out former Bills first round pick EJ Manuel and veteran Matt Cassel after a preseason quarterback competition among the three candidates.[12] 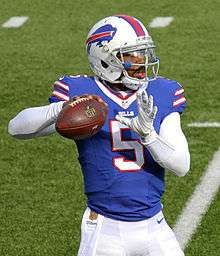 Taylor in his first season with the Buffalo Bills playing against the Houston Texans.

In his first career NFL start, Taylor earned the win for Buffalo, beating the Indianapolis Colts 27–14. He went 14-for-19 and threw for 195 yards with one touchdown. He also added forty-one yards on the ground. The next week against the New England Patriots Taylor threw 30 passes, completing 23 passes and throwing 3 touchdowns while throwing 3 interceptions in a 40–32 loss. Taylor also added 43 yards and a touchdown on the ground. Taylor had the best game of his career so far in a 41–14 win over the Miami Dolphins. He completed 21 of his 29 attempts with 3 touchdowns and no interceptions while adding 12 yards on the ground.

During a week 5 come-from-behind victory over the Tennessee Titans, Tyrod became only the fifth quarterback in NFL history to throw for at least 100 yards, run for at least 70 yards and catch a pass in a single game. His jersey from the game was sent to the Pro Football Hall of Fame in Canton, Ohio.[13] The following week it was reported that Taylor had suffered an MCL injury during the game, with the expectation that he would miss the Bills' week six match-up against the undefeated Cincinnati Bengals, and then be re-evaluated the next week.[14]

Taylor returned to action week 9, and led the Bills to a 33–17 victory over the Miami Dolphins. Taylor finished with a stat line of 11-for-12, 181 passing yards, and a passing touchdown.[15] In the win, Taylor also set the franchise record for completion percentage in a single game, completing 91.7% of his passes.

Taylor set the Buffalo Bills' franchise record for consecutive passes without an interception in the third quarter of a week 13 win against the Houston Texans. The previous record had been held by Drew Bledsoe since 2002.[16] The streak ended on the last pass of the game in a week 14 loss to the Philadelphia Eagles (222). The Bills were eliminated from playoff contention the very next week after a 35–25 loss to the Washington Redskins. In Week 16, Taylor set the Bills franchise record for most rushing yards in a season by a quarterback, and he became the first Bills quarterback with over 500 yards rushing in a season. The Bills finished a respectable 8–8 on the year, only the third time they finished .500 or above consecutive years since the late 1990s.

Taylor finished the year completing 63.7 percent of his passes, while throwing for over 3,000 yards, with 20 touchdowns to just six interceptions. He also added 568 yards on the ground.

On January 25, 2016, Taylor and center Eric Wood were selected to the Pro Bowl. They replaced Panthers QB Cam Newton and Panthers center Ryan Kalil, who were playing in Super Bowl 50. In the Pro Bowl, Taylor completed 8-of-14 passes for 120 yards and one touchdown, but he also threw three interceptions.

Taylor entered training camp as the starting quarterback for the Bills in the final year of his 2015 Bills contract, as the third year of his deal was voided when he played more than 50% of the snaps in the 2015 season.[17] On August 12, 2016, Taylor signed a six-year contract extension worth $92 million with the Bills.[18]