For the film of the same name, see Uncertainty (film). 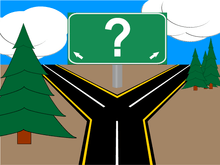 Situations often arise wherein a decision must be made when the results of each possible choice are uncertain.

Uncertainty is a situation which involves imperfect and/or unknown information. However, "uncertainty is an unintelligible expression without a straightforward description".[1] It arises in subtly different ways in a number of fields, including insurance, philosophy, physics, statistics, economics, finance, psychology, sociology, engineering, metrology, and information science. It applies to predictions of future events, to physical measurements that are already made, or to the unknown. Uncertainty arises in partially observable and/or stochastic environments, as well as due to ignorance and/or indolence.[2]

Although the terms are used in various ways among the general public, many specialists in decision theory, statistics and other quantitative fields have defined uncertainty, risk, and their measurement as:

Uncertainty
The lack of certainty. A state of having limited knowledge where it is impossible to exactly describe the existing state, a future outcome, or more than one possible outcome.
Measurement of uncertainty
A set of possible states or outcomes where probabilities are assigned to each possible state or outcome – this also includes the application of a probability density function to continuous variables.
Risk
A state of uncertainty where some possible outcomes have an undesired effect or significant loss.
Measurement of risk
A set of measured uncertainties where some possible outcomes are losses, and the magnitudes of those losses – this also includes loss functions over continuous variables.[3][4][5][6]

In economics, Frank Knight distinguished risk and uncertainty; uncertainty being risk that is immeasurable, not possible to calculate, and referred to as Knightian uncertainty:

Uncertainty must be taken in a sense radically distinct from the familiar notion of risk, from which it has never been properly separated.... The essential fact is that 'risk' means in some cases a quantity susceptible of measurement, while at other times it is something distinctly not of this character; and there are far-reaching and crucial differences in the bearings of the phenomena depending on which of the two is really present and operating.... It will appear that a measurable uncertainty, or 'risk' proper, as we shall use the term, is so far different from an unmeasurable one that it is not in effect an uncertainty at all.
— Frank Knight (1885–1972), Risk, Uncertainty, and Profit (1921), University of Chicago.[7]

There are other taxonomies of uncertainties and decisions that include a broader sense of uncertainty and how it should be approached from an ethics perspective:[8]

A taxonomy of uncertainty

There are some things that you know to be true, and others that you know to be false; yet, despite this extensive knowledge that you have, there remain many things whose truth or falsity is not known to you. We say that you are uncertain about them. You are uncertain, to varying degrees, about everything in the future; much of the past is hidden from you; and there is a lot of the present about which you do not have full information. Uncertainty is everywhere and you cannot escape from it.

For example, if it is unknown whether or not it will rain tomorrow, then there is a state of uncertainty. If probabilities are applied to the possible outcomes using weather forecasts or even just a calibrated probability assessment, the uncertainty has been quantified. Suppose it is quantified as a 90% chance of sunshine. If there is a major, costly, outdoor event planned for tomorrow then there is a risk since there is a 10% chance of rain, and rain would be undesirable. Furthermore, if this is a business event and $100,000 would be lost if it rains, then the risk has been quantified (a 10% chance of losing $100,000). These situations can be made even more realistic by quantifying light rain vs. heavy rain, the cost of delays vs. outright cancellation, etc.

Some may represent the risk in this example as the "expected opportunity loss" (EOL) or the chance of the loss multiplied by the amount of the loss (10% × $100,000 = $10,000). That is useful if the organizer of the event is "risk neutral", which most people are not. Most would be willing to pay a premium to avoid the loss. An insurance company, for example, would compute an EOL as a minimum for any insurance coverage, then add onto that other operating costs and profit. Since many people are willing to buy insurance for many reasons, then clearly the EOL alone is not the perceived value of avoiding the risk.

Quantitative uses of the terms uncertainty and risk are fairly consistent from fields such as probability theory, actuarial science, and information theory. Some also create new terms without substantially changing the definitions of uncertainty or risk. For example, surprisal is a variation on uncertainty sometimes used in information theory. But outside of the more mathematical uses of the term, usage may vary widely. In cognitive psychology, uncertainty can be real, or just a matter of perception, such as expectations, threats, etc.

Vagueness or ambiguity are sometimes described as "second order uncertainty", where there is uncertainty even about the definitions of uncertain states or outcomes. The difference here is that this uncertainty is about the human definitions and concepts, not an objective fact of nature. It is usually modelled by some variation on Zadeh's fuzzy logic. It has been argued that ambiguity, however, is always avoidable while uncertainty (of the "first order" kind) is not necessarily avoidable.

Uncertainty may be purely a consequence of a lack of knowledge of obtainable facts. That is, there may be uncertainty about whether a new rocket design will work, but this uncertainty can be removed with further analysis and experimentation. At the subatomic level, however, uncertainty may be a fundamental and unavoidable property of the universe. In quantum mechanics, the Heisenberg Uncertainty Principle puts limits on how much an observer can ever know about the position and velocity of a particle. This may not just be ignorance of potentially obtainable facts but that there is no fact to be found. There is some controversy in physics as to whether such uncertainty is an irreducible property of nature or if there are "hidden variables" that would describe the state of a particle even more exactly than Heisenberg's uncertainty principle allows.

The most commonly used procedure for calculating measurement uncertainty is described in the "Guide to the Expression of Uncertainty in Measurement" (GUM) published by ISO. A derived work is for example the National Institute for Standards and Technology (NIST) Technical Note 1297, "Guidelines for Evaluating and Expressing the Uncertainty of NIST Measurement Results", and the Eurachem/Citac publication "Quantifying Uncertainty in Analytical Measurement". The uncertainty of the result of a measurement generally consists of several components. The components are regarded as random variables, and may be grouped into two categories according to the method used to estimate their numerical values:

By propagating the variances of the components through a function relating the components to the measurement result, the combined measurement uncertainty is given as the square root of the resulting variance. The simplest form is the standard deviation of a repeated observation.

In metrology, physics, and engineering, the uncertainty or margin of error of a measurement, when explicitly stated, is given by a range of values likely to enclose the true value. This may be denoted by error bars on a graph, or by the following notations:

When the uncertainty represents the standard error of the measurement, then about 68.3% of the time, the true value of the measured quantity falls within the stated uncertainty range. For example, it is likely that for 31.7% of the atomic mass values given on the list of elements by atomic mass, the true value lies outside of the stated range. If the width of the interval is doubled, then probably only 4.6% of the true values lie outside the doubled interval, and if the width is tripled, probably only 0.3% lie outside. These values follow from the properties of the normal distribution, and they apply only if the measurement process produces normally distributed errors. In that case, the quoted standard errors are easily converted to 68.3% ("one sigma"), 95.4% ("two sigma"), or 99.7% ("three sigma") confidence intervals.

Uncertainty and the media

Uncertainty in science, and science in general, is often interpreted much differently in the public sphere than in the scientific community.[10] This is due in part to the diversity of the public audience, and the tendency for scientists to misunderstand lay audiences and therefore not communicate ideas clearly and effectively.[10] One example is explained by the information deficit model. Also, in the public realm, there are often many scientific voices giving input on a single topic.[10] For example, depending on how an issue is reported in the public sphere, discrepancies between outcomes of multiple scientific studies due to methodological differences could be interpreted by the public as a lack of consensus in a situation where a consensus does in fact exist.[10] This interpretation may have even been intentionally promoted, as scientific uncertainty may be managed to reach certain goals. For example, global warming contrarian activists took the advice of Frank Luntz to frame global warming as an issue of scientific uncertainty, which was a precursor to the conflict frame used by journalists when reporting the issue.[11]

Journalists often either inflate uncertainty (making the science seem more uncertain than it really is) or downplay uncertainty (making the science seem more certain than it really is).[14] One way that journalists inflate uncertainty is by describing new research that contradicts past research without providing context for the change.[14] Other times, journalists give scientists with minority views equal weight as scientists with majority views, without adequately describing or explaining the state of scientific consensus on the issue.[14] In the same vein, journalists often give non-scientists the same amount of attention and importance as scientists.[14]

Journalists may downplay uncertainty by eliminating "scientists' carefully chosen tentative wording, and by losing these caveats the information is skewed and presented as more certain and conclusive than it really is".[14] Also, stories with a single source or without any context of previous research mean that the subject at hand is presented as more definitive and certain than it is in reality.[14] There is often a "product over process" approach to science journalism that aids, too, in the downplaying of uncertainty.[14] Finally, and most notably for this investigation, when science is framed by journalists as a triumphant quest, uncertainty is erroneously framed as "reducible and resolvable".[14]

Some media routines and organizational factors affect the overstatement of uncertainty; other media routines and organizational factors help inflate the certainty of an issue. Because the general public (in the United States) generally trusts scientists, when science stories are covered without alarm-raising cues from special interest organizations (religious groups, environmental organizations, political factions, etc.) they are often covered in a business related sense, in an economic-development frame or a social progress frame.[15] The nature of these frames is to downplay or eliminate uncertainty, so when economic and scientific promise are focused on early in the issue cycle, as has happened with coverage of plant biotechnology and nanotechnology in the United States, the matter in question seems more definitive and certain.[15]

Sometimes, too, stockholders, owners, or advertising will pressure a media organization to promote the business aspects of a scientific issue, and therefore any uncertainty claims that may compromise the business interests are downplayed or eliminated.[14]