A subterranean river in the Cross Cave system of Slovenia.

A subterranean river is a river that runs wholly or partly beneath the ground surface – one where the riverbed does not represent the surface of the Earth (rivers flowing in gorges are not classed as subterranean[1]). It should also not be confused with an aquifer which may flow like a river but is contained within a permeable layer of rock or other unconsolidated materials.

Subterranean rivers may be entirely natural, flowing through cave systems. In karst topography, rivers may disappear through sinkholes, continuing underground. In some cases, they may emerge into daylight further downstream. Some fish (popularly known as cavefish) and other troglobite organisms are adapted to life in subterranean rivers and lakes.[2]

Subterranean rivers can also be the result of covering over a river and/or diverting its flow into culverts, usually as part of urban development.[3] Reversing this process is known as daylighting a stream and is a visible form of river restoration. One successful example is the Cheonggye Stream in the centre of Seoul.[4][5]

Examples of subterranean rivers also occur in mythology and literature. 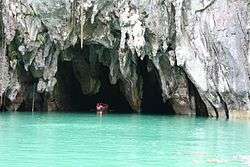 The Puerto Princesa Subterranean River can be entered by boat through a cave.

There are many natural examples of subterranean rivers. Among others: 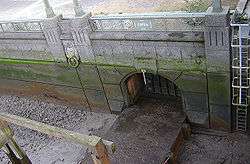 The Effra is one of the subterranean rivers of London. It empties into the Thames by Vauxhall Bridge, from which this photograph was taken.

In many cities there are natural streams which have been partially or entirely built over. Such man-made examples of subterranean urban streams are too numerous to list, but notable examples include:

Some fish (popularly known as cavefish) and other troglobite organisms are adapted to life in subterranean rivers and lakes. 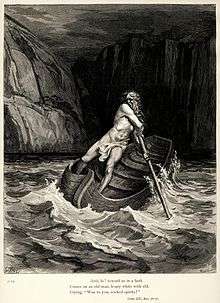 Greek mythology included the Styx, Phlegethon, Acheron, Cocytus, and Lethe as rivers within the Underworld. Dante Alighieri, in his Inferno, included the Acheron, Phlegethon, and Styx as rivers within his subterranean Hell. The river Alph, running "Through caverns measureless to man / Down to a sunless sea" is central to the poem Kubla Khan, by Samuel Taylor Coleridge.

The characters in Jules Verne's A Journey to the Centre of the Earth encounter a subterranean river:

"Hans was not mistaken," he said. "What you hear is the rushing of a torrent." "A torrent?" I exclaimed. "There can be no doubt; a subterranean river is flowing around us."[8]

"You can bury them deep under, sir; you can bind them in tunnels, ... but in the end where a river has been, a river will always be."[9]