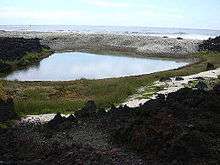 Anchialine pool in Maui, Hawaii, with the ocean in the background 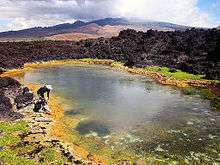 Ecologists collecting organisms from an anchialine pool in Maui

An anchialine pool or pond (pronounced "AN-key-ah-lin", from Greek ankhialos, "near the sea") is a landlocked body of water with a subterranean connection to the ocean. Anchialine pools are a feature of coastal aquifers which are density stratified, with the water near the surface being fresh or brackish, and saline water intruding from the coast below at some depth. Depending on the site, it is sometimes possible to access the deeper saline water directly in the anchialine pool or sometimes it may be accessible by cave diving.[1]

Water levels in anchialine pools often fluctuate with tidal changes due to the coastal location and the connection with the ocean.[2] The range in water levels fluctuations will be decreased (damped) and delayed compared to the range and time observed for the adjacent tide. The primary controls on the damping and lag are the distance from the coast, and the hydraulic conductivity of the geological materials.

Anchialine pools are extremely common worldwide especially along neo-tropical coastlines where the geology and aquifer system are relatively young, and there is minimal soil development. Such conditions occur notably where the bedrock is limestone or recently formed volcanic lava. Many anchialine pools are found on the coastlines of the island of Hawaii, and on the Yucatán Peninsula, where they are locally called cenotes as well as Christmas Island.[3]

In Hawaii, the pools are home to mostly the ʻōpaeʻula (Hawaiian shrimp, Halocaridina rubra). The Sailor's Hat crater created by an explosives test in 1965 is an anchialine pool.[4]

In karst anchialine pools and the caves these may be connected to, the fauna are diverse and include: crustaceans including remipedia and copepods, and among the vertebrates are several species of blind cave fish and eels.