This article is about the American lobbying group. For trade organisations globally, see Chamber of commerce.

The U.S. Chamber of Commerce's own history of itself describes it as originating from an April 22, 1912, meeting of delegates.[5] The Chamber was created by President Taft as a counterbalance to the labor movement of the time.[2]

In 1993, the Chamber lost several members over its support for Clinton's healthcare reform efforts. The Chamber had chosen to support healthcare reform at that time due to the spiraling healthcare costs experienced by its members. However, House Republicans retaliated by urging boycotts of the organization. The Chamber operated its own cable television station, Biz-Net until 1997 in order to promote its policies. The Chamber shifted somewhat more to the right when Tom Donohue became head of the organization in 1997. By the time health care reform became a major issue again in 2010-2012, the organization opposed such efforts.[2] The Washington, D.C., headquarters of the U.S. Chamber of Commerce occupies land that was formerly the home of Daniel Webster.[6] 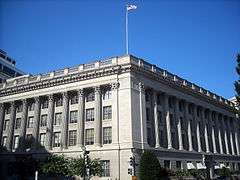 United States Chamber of Commerce building at 1615 H Street, NW, in Washington, D.C. The building is listed on the National Register of Historic Places.

Although all chambers can work with all levels of government, they tend to concentrate their efforts on specific levels: Local chambers of commerce tend to focus on local issues, state chambers on state issues, and the U.S. Chamber of Commerce focuses on national issues at the federal government level.[7] They also work closely with a number of other youth organizations in the country about the value and role of business in our society today. [8]

In late 2011 it was revealed that the Chamber's computer system was breached from November 2009 to May 2010 by Chinese hackers. The purpose of the breach appeared to be gain information related to the Chamber's lobbying regarding Asian trade policy.[9]

Since a 1971 internal memo by Lewis Powell advocating a more active role in cases before United States Supreme Court, the Chamber has found increasing success in litigation. Under the Burger and Rehnquist Courts the Chamber was on the prevailing side 43% and 56% of the time, respectively, but under the Roberts Court, the Chamber's success rate rose to 68% as of 21 June 2012.[10]

The Chamber has emerged as the largest lobbying organization in America. The Chamber's lobbying expenditures in 2015 were more than two-and-a-half times higher than the next highest spender: American Medical Association, at $23.9 million.

As of October 2010, the Chamber had a worldwide network of 115 American Chamber of Commerce affiliates located in 108 countries.[24] The US Chamber says that a relative handful of the Chamber's 300,000 members are "non-U.S.-based (foreign) companies." It claims that, "No foreign money is used to fund political activities." A US Chamber executive has said that the organization has had "foreign multinationals" (foreign companies) as members for "over a century, many for decades."[25] The US Chamber states that it receives approximately $100,000 annually in membership dues from its foreign affiliates, out of an annual budget of $200 million.[25][26]

AmCham China, with members comprise more than 2,600 individuals from over 1,200 companies,[27] is said to be the largest affiliate outside of United States.

In the 2008 election cycle, aggressive ads paid for by the USCC attacked a number of Democratic congressional candidates (such as Minnesota's DFL Senate candidate Al Franken) and supported a number of Republican candidates including John Sununu, Gordon Smith, Roger Wicker, Saxby Chambliss and Elizabeth Dole.

During the 2010 campaign cycle, the Chamber spent $32 million, 93 percent of which was to help Republican candidates.[28] The Chamber's spending out of its general funds was criticized as illegal under campaign finance laws.[29][30][31][32] In a front-page article titled "Large Donations Aid U.S. Chamber in Election Drive", The New York Times reported that the Chamber used contributions in campaigns without separating foreign and domestic contributions, which if true would appear to contravene prohibitions on lobbying by foreign nations and groups. In question was the Chamber's international branches, "AmChams", whose funds are unaccounted for and perhaps mix into the general collection.[30][33][34][35] All branches, corporations, and members of the Chamber pay dues; the question is how they divide the money for expenses in national campaigns.

The truth of these allegations is unknown, as neither the Chamber nor its detractors can provide any concrete evidence to support or refute the allegations.[36] In reference to the matter, Tom Donohue wrote his council and members on October 12, 2010. He stated, "Let me be clear. The Chamber does not use any foreign money to fund voter education activities—period. We have strict financial controls in place to ensure this. The funds we receive from American Chambers of Commerce abroad, bilateral business councils, and non-U.S. based global companies represent a small fraction of our more than $200 million annual revenues. Under our accounting system, these revenues are never used to support any political activities. We are in full compliance with all laws and regulations."[37][38][39] Organizations Moveon.org, Think Progress, and People for the American Way rallied against the Chamber at the Justice Department to start an injunction for a criminal investigation.[40][41] The Chamber is not required to produce fundraising records.[42]

President Barack Obama and other legislators asked the IRS and Federal Elections Commission to ensure that the foreign funds that the Chamber receives are not used for political activities.[43][44] Obama criticized the Chamber for not disclosing its contributors.[45] The Chamber has responded that "No foreign money is used to fund political activities." [25] After the election, the Chamber reiterated the nature of Obama's policy dictated action from the Chamber, however the conflict would not be made "personal".[46][47]

In 2011, the Chamber hosted a "GOP Holiday Party" honoring the Republican National Committee.[50]

Despite more than $33 million spent supporting candidates in the 2012 Congressional races, Chamber-backed candidates lost 36 out of the 50 elections in which the Chamber participated.[51]

In late 2013 the Chamber announced it would distribute campaign contributions in "10s" of Republican primary elections to oppose the Tea Party movement and create a "more governable Republican party."[52] In early 2014 Tom Donohue clarified that the push would be to elect "pro-business" members of Congress "who favor trade, energy development and immigration reform".[53]

In April 2009, the Chamber began an ad campaign against the proposed Employee Free Choice Act.[55] Critics such as the National Association of Manufacturers have contended that additional use of card check elections will lead to overt coercion on the part of union organizers. Opponents of the Employee Free Choice Act also claim, referring to perceived lack of access to a secret ballot, that the measure would not protect employee privacy. For this reason the Chamber argued the act would reduce workers' rights.[56]

In November 2009, the Chamber was reported to be seeking to spend $50,000 to hire a "respected economist" to produce a study that could be used to portray health-care legislation as a job killer and threat to the nation's economy.[57]

In December 2009, activist group Velvet Revolution, under the name StopTheChamber, posted a $200,000 reward for "information leading to the arrest and conviction of Chamber of Commerce CEO Tom Donahue."[58]

Some in the business community have criticized the Chamber's approach to public issues as overly aggressive. Hilary Rosen, former CEO of the Recording Industry Association of America, added that "Their aggressive ways are out of step with a new generation of business leadership who are looking for more cooperative relationship with Washington."[59]

The climate campaign organisation 350.org estimates that 94% of US Chamber of Commerce electoral contributions went to candidates denying the scientific consensus on climate change.[60]

The Chamber threatened to sue the Environmental Protection Agency in order to have what the Chamber termed "the Scopes monkey trial of the 21st century" on climate science before any federal climate regulation is passed in October 2009.[19] In response to this position, several companies quit the Chamber, including Exelon Corp, PG&E Corp, PNM Resources, and Apple Inc.[20] Nike, Inc resigned from their board of directors position, but continued their membership. Nike stated that they believe they can better influence the policy by being part of the conversation.[61] Peter Darbee, CEO of former chamber member PG&E (a natural gas and electric utility company in California), said, "We find it dismaying that the Chamber neglects the indisputable fact that a decisive majority of experts have said the data on global warming are compelling... In our view, an intellectually honest argument over the best policy response to the challenges of climate change is one thing; disingenuous attempts to diminish or distort the reality of these challenges are quite another."[62] In response to an online campaign of Prius owners organized by Moveon.org, Toyota stated that it would not leave the Chamber.[63] The Aspen Chamber Resort Association of Aspen, Colorado left the U.S. Chamber because of its views on climate change, in light of how climate change could hurt Aspen's winter tourism industry.[64]

While generally a conservative group, the Chamber of Commerce has come under attack by conservatives and others for its support of amnesty for illegal immigrants.[65][66] In 2014, Tom Donohue stated the Chamber will "pull out all stops" for the passage of immigration reform in Congress.[67] According to the Washington Post, Donohue did not offer specifics with regard to provisions or bills on the matter, speaking generally about the impact immigration would have on the U.S. economy.

Several organization have attacked the Chamber for its advocacy, including Chamber Watch (a campaign of Public Citizen). Advocates for independent business, like the American Independent Business Alliance (AMIBA) and "green businesses," like the American Sustainable Business Council, have fought the Chamber on multiple issues. Among major divisions between the Chamber and these business advocates is allowing corporations to engage in electioneering.[68] Oliver E. Diaz says one example of this was when the Chamber spent $1,000,000+ to fund negative campaign ads against him and have judicial candidate Keith Starrett elected instead.[69]