Clarence Saxby Chambliss (born November 10, 1943) is an American politician who was a United States Senator from Georgia from 2003 to 2015. A member of the Republican Party, he previously served as a U.S. Representative from 1995 to 2003.

During his four terms in the House, Chambliss served on the United States House of Representatives Permanent Select Committee on Intelligence and chaired the House Intelligence Subcommittee on Terrorism and Homeland Security, which oversaw investigations of the intelligence community after the September 11 attacks in 2001.

During his 2002 bid for the U.S. Senate, Chambliss focused on the issue of national defense and homeland security. He won with 53% of the vote. For several years he was the ranking Republican on the Senate Committee on Agriculture, Nutrition and Forestry, and chaired the committee during the 109th Congress (2005–2007). In the 112th Congress (2011–2012) he is the ranking Republican on the Select Committee on Intelligence.

Chambliss has a conservative voting record in the Senate, but he has participated in some bipartisan legislation. In December 2011 the Washington Post named Chambliss and the "Gang of Six" as one of the Best Leaders of 2011 for attempts to craft a bipartisan deficit reduction package.[2]

On January 24, 2013, Chambliss announced that he would not be running for a third term.[3]

Chambliss was born in Warrenton, North Carolina, the son of Emma Baker (née Anderson) and Alfred Parker Chambliss, Jr., an Episcopalian minister.[4][5] He graduated from C.E. Byrd High School in Shreveport, Louisiana, in 1961. He attended Louisiana Tech University from 1961–1962 and earned a bachelor's degree in Business Administration from the University of Georgia in 1966, working his way through college at a bakery in Athens.[4] He received his Juris Doctor from the University of Tennessee College of Law in 1968. He is a member of the Sigma Chi Fraternity.

During the Vietnam War, Chambliss received student deferments and was also given a medical deferment (1-Y) for bad knees due to a football injury.[6]

Chambliss is a member of St. Mark's Anglican Church in Moultrie, Georgia. He married Julianne Frohbert in 1966 and they have two children and six grandchildren.

Chambliss's son, Bo, was a registered lobbyist for the Chicago Mercantile Exchange and lobbied on commodity futures trading issues that fall under legislative jurisdiction of the Senate Agriculture Committee, of which the Senator is a member. The Senator's office enacted a policy that prevents Bo from lobbying the Senator or his staff.[7]

Chambliss was elected to the U.S. House of Representatives in 1994 as one of the new conservative Republican congressmen whose elections caused the party to gain a majority in both houses of Congress. A long-time Congressman and fellow Georgian, Newt Gingrich, was the leader of the movement, and Chambliss and the other Republicans elected that year are known as the Class of '94.

Chambliss was elected from the Macon-based 8th District, after six-term incumbent J. Roy Rowland retired. He was elected with 63%[8] of the vote—an unexpectedly large margin since the 8th had never elected a Republican. He faced a tough re-election fight in 1996 against Macon attorney Jim Wiggins, but breezed to reelection in 1998 and 2000.

During his four terms in the House, Chambliss served on the United States House of Representatives Permanent Select Committee on Intelligence and chaired the House Intelligence Subcommittee on Terrorism and Homeland Security.

Less than a month after the September 11, 2001, terrorist attacks, the House Intelligence Subcommittee on Terrorism and Homeland Security, which Chambliss chaired, investigated intelligence issues related to the attacks. The committee's investigation resulted in the first comprehensive report detailing critical shortfalls within the United States intelligence community's performance and technological capabilities.[9]

Chambliss was criticized for remarks he made during a November 19, 2001 meeting with first responders in Valdosta, Georgia, where he said that homeland security would be improved by turning the sheriff loose to "arrest every Muslim that crosses the state line." Chambliss apologized for the remarks.[10]

In 2006, Chambliss was among several congressional Republicans and Democrats who returned campaign donations from Jack Abramoff.[11]

As a Representative, Chambliss sponsored 21 bills, including:[12] 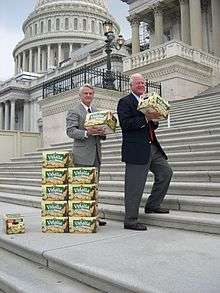 Chambliss with Zell Miller in 2004

Upon urging from Karl Rove and the Bush administration who viewed the Democratic party of Georgia as vulnerable, Chambliss ran for the Senate in 2002, facing freshman Democratic incumbent Max Cleland. Chambliss's political career would have likely ended if he hadn't run for the Senate; the state legislature had shifted his home in Moultrie (along with most of the southern portion of his district) to the nearby 1st district, represented by fellow Republican and friend Jack Kingston.

Chambliss focused on the issue of national defense and homeland security during his campaign, and released an ad that included Osama bin Laden and Saddam Hussein, highlighting Cleland's record on the issues of war and terrorism.[13] Fellow Republicans criticized him after he ran an ad against Cleland, a decorated Vietnam War veteran, in which he argued he was weak on defense and homeland security.[14]

Chambliss received criticism from Democrats and Republicans for this ad, pointing out that he, who hadn't served in the Vietnam War due to receiving military deferments, had attacked a Vietnam War veteran who lost three limbs during his service for not being tough enough on issues of war and homeland security.[15] Republican Senator John McCain of Arizona said of one ad, "It's worse than disgraceful, it's reprehensible."[16] McCain, along with Republican Senator Chuck Hagel of Nebraska, made significant complaints to the Republican National Committee until the ads were taken down.[17] Chambliss supporters disagreed with the criticism, saying the advertisement did not question Cleland's patriotism, but rather his judgment.[18][19]

Chambliss won the election, receiving 53 percent of the votes to Cleland's 46 percent.

Karl Rove stated in his 2010 memoirs that "Although Cleland personally blamed me for the ad, saying I was guilty of 'character assassination' and responsible for 'the biggest lie in America.' I did not conceive, create, or have anything to do with the Chambliss ad. But I thought it was effective because it was factual. Chambliss had run a spot associating himself with Pres. Bush by suggesting Cleland had not supported creating the Homeland Security department. It was a clever tactic, since Bush was very popular in Georgia. Cleland had worked against Bush on creation of the new department. Chambliss' ad morphed Osama bin Laden and Saddam into Cleland suggesting he supported them, followed by a scrolling list of the times he had voted against the homeland security bill."[20]

On November 4, 2008, Chambliss received 50% of the vote, while Democratic challenger Jim Martin received 47% and Libertarian Allen Buckley received 3% of the vote.[21]

Since no candidate exceeded 50% of the vote, a runoff election between Chambliss and Martin was held on December 2, 2008.

During the run-off period, Chambliss received a subpoena regarding the investigation of a lawsuit against Imperial Sugar that claims that Imperial "wrongfully" failed to remove hazards that caused the disaster of a Savannah-based sugar refinery that exploded on February 7, 2008. Chambliss was accused of "harassing"[24] a former sugar company executive. In a statement, Chambliss said he has referred the matter to Senate lawyers. Chambliss has stated: "I continue to sympathize with the families who were devastated by this tragedy and I will continue to work to protect the interests of those families." Savannah attorney Mark Tate, "an active backer of Democratic candidates," insisted that "there is nothing political" about the timing of the subpoena. When Tate subpoenaed Chambliss to testify in the case, Chambliss claimed "legislative immunity."[25][26][27]

As a Senator, Chambliss sponsored 125 bills, including:[28]

Senate Committee on Rules and Administration

Commission on Security and Cooperation in Europe

According to the Congressional Research Service, Sen. Chambliss is the only senator since 1947 to have chaired a full standing Senate Committee (Agriculture) after serving in the Senate for just two years.

Chambliss's voting record is typically that of voting in line with conservative issues.[30][31] He is the primary sponsor in the United States Senate of the tax-reform proposal The Fair Tax Act (S. 1025), attracting more cosponsors than any other fundamental tax reform bill introduced. Chambliss was one of the co-sponsors of the controversial bill, (PIPA).[32]

Although Chambliss has a conservative voting record, he has participated in bi-partisan legislation—such as the 2007 Farm Bill, the bi-partisan immigration reform (led by John McCain and Ted Kennedy) in 2007[33] and the Emergency Economic Stabilization Act of 2008.[33] He is also the Republican leader of the Gang of 10, a bipartisan group which has worked to create a compromise surrounding the energy policy of the United States.

On March 6, 2013, Chambliss was one of 12 Senators invited to a private dinner hosted, and personally paid for, by President Obama at The Jefferson Hotel.[34] That same night, Chambliss participated in Rand Paul's filibuster over the government’s use of lethal drone strikes—forcing the Senate to delay the expected confirmation of John O. Brennan to lead the Central Intelligence Agency.[35]

In April 2013, Chambliss was one of forty-six senators to vote against a bill which would have expanded background checks for all firearms buyers. Chambliss voted with 40 Republicans and 5 Democrats to stop the passage of the bill.[36]

Chambliss received bipartisan criticism in 2013 after discussing the "hormone level created by nature" as a possible cause of sexual assault in the military.[37]

On agricultural issues, the American Farm Bureau gave Chambliss its "Friend of the Farm Bureau" award throughout his service in the U.S. Senate.[43]

On economic issues including voting on the national budget, national spending, and taxes, in 2007, the National Tax Limitation Committee gave Chambliss a 90% rating,[44] and the group Americans for Tax Reform gave him a 100% rating.[45]

On organized labor issues, in 2007 the AFL-CIO gave Chambliss an 11% rating,[52] and the International Foodservice Distributors Association gave him an 85% rating.[53]

On environmental issues, in 2003 the League of Conservation Voters gave Chambliss a 0% rating.[54]

On May 6, 2013, Chambliss played golf in a foursome with President Obama, Senator Bob Corker (R–TN), and Senator Mark Udall (D–CO) at Andrews Air Force Base in Maryland. On the par three 11th hole, Chambliss made a hole in one, choking up on a five iron.[55]

In January 2009, Georgia Trend, a prominent state business and political magazine, named Chambliss its Georgian of the Year. [56]