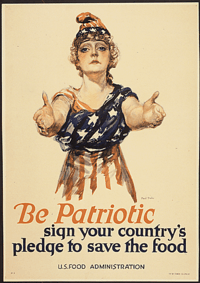 Poster with a patriotic theme to save food (1917), issued when domestic food restrictions were applied to support the U.S. army overseas.

During the United States participation in World War I the U. S. Food Administration was the responsible agency for the administration of the U.S. army overseas and allies' food reserves. One of its important tasks was the stabilization of the price of wheat on the U.S. market. It was established by Executive Order 2679-A of August 10, 1917, pursuant to the Food and Fuel Control Act. 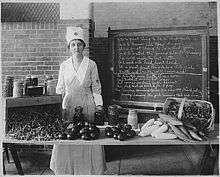 Under the direction of Herbert Hoover the U.S. Food Administration employed its Grain Corporation, organized under the provisions of the Food Control Act of August 10, 1917, as an agency for the purchase and sale of foodstuff. Having done transactions in the size of $7 billion it was rendered obsolete by the armistice in Europe. President Woodrow Wilson promoted its transition in a new agency for the support of the reconstruction of Europe. It became the American Relief Administration, approved by an Act (Public, No. 274, 65th Congress) on February 25, 1919.

During the time of the administration, the United States was short of nearly everything during their time of need. All citizens were asked to donate any weapons, horses, and ammunition they possessed to help supply the army, with a small hope of the items being returned. The rationing was done during this time of National need so that food for soldiers, and citizens, wouldn't be an issue. Concepts such as "meatless Mondays" and "wheatless Wednesdays" were also implemented to help ration food, so that the government had one less thing to worry about, essentially.