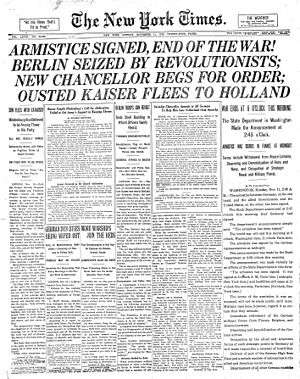 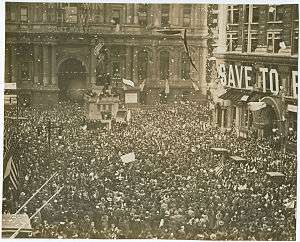 Armistice Day is commemorated every year on 11 November to mark the armistice signed between the Allies of World War I and Germany at Compiègne, France, for the cessation of hostilities on the Western Front of World War I, which took effect at eleven o'clock in the morning—the "eleventh hour of the eleventh day of the eleventh month" of 1918. The date was declared a national holiday in many allied nations, and coincides with Remembrance Day and Veterans Day, public holidays.

The first Armistice Day was held at Buckingham Palace, commencing with King George V hosting a "Banquet in Honour of the President of the French Republic"[1] during the evening hours of 10 November 1919. The first official Armistice Day events were subsequently held in the grounds of Buckingham Palace on the morning of 11 November 1919. This would set the trend for a day of Remembrance for decades to come.

In 1919, South African Sir Percy Fitzpatrick proposed a two-minute silence to Lord Milner. This had been a daily practice in Cape Town from April 1918 onward, since being proposed by Sir Harry Hands,[2] and within weeks it had spread through the British Commonwealth after a Reuters correspondent cabled a description of this daily ritual to London.[3] People observe a one or more commonly a two-minute moment of silence at 11:00 a.m. local time. It is a sign of respect for, in the first minute, the roughly 20 million people who died in the war, and in the second minute dedicated to the living left behind, generally understood to be wives, children and families left behind but deeply affected by the conflict.

Similar ceremonies developed in other countries during the inter-war period. In South Africa, for example, the Memorable Order of Tin Hats had by the late 1920s developed a ceremony whereby the toast of "Fallen Comrades" was observed not only in silence but darkness, all except for the "Light of Remembrance", with the ceremony ending with the Order’s anthem "Old Soldiers Never Die". In Australia, the South Australian State Branch of the Returned Sailors & Soldiers' Imperial League of Australia developed during the inter-war period a simple ceremony of silence for departed comrades at 9 p.m., presumably to coincide with the traditional 11:00 a.m. time for Armistice ceremonies taking place in Europe due to the ten-hour time difference between Eastern Australia and Europe. Veterans in New Zealand have used silence to pay homage to departed comrades in general at veteran functions, as the toast of "Fallen" or "Absent Comrades".

In Britain, beginning in 1939, the two-minute silence was moved to the Sunday nearest to 11 November in order not to interfere with wartime production should 11 November fall on a weekday.

After the end of World War II, most member states of the Commonwealth of Nations, like United Kingdom and (as Canada in 1931), moved most Armistice Day events to the nearest Sunday and officially began to commemorate both World Wars. They adopted the name Remembrance Day or Remembrance Sunday.

Other countries also changed the name of the holiday just prior to or after World War II, to honor veterans of that and subsequent conflicts. The United States chose All Veterans Day, later shortened to 'Veterans Day', to explicitly honor military veterans, including those participating in other conflicts.[4]

In Britain and Commonwealth countries

Both Armistice Day and Remembrance Sunday are commemorated formally. In recent years Armistice Day has become increasingly recognised, and many people now attend the 11:00 a.m. ceremony at the Cenotaph in London – an event organised by Royal British Legion, a British charity dedicated to perpetuating the memory of those who served in the First World War and veterans of all subsequent wars involving British and Commonwealth troops.[5]

In Canada, 11 November is a time to honor both living and dead veterans. Patriotic displays are created annually,[6] and veterans (sometimes including active duty personnel, family members, or an assistant) are offered free transit and cab rides in a number of cities, including Halifax, Ottawa, Toronto, Mississauga, London, Calgary, and Vancouver.[7]

In the U.S., the function of Veterans Day is subtly different from that of other 11 November observances. Instead of specifically honoring war dead, Veterans Day honors all American veterans living and dead. The official national remembrance of those killed in action is Memorial Day, originally called 'Decoration Day', from the practice of decorating the graves of war dead in the years immediately following the American Civil War.

National Independence Day is a public holiday in Poland celebrated on 11 November to commemorate the anniversary of the restoration of Poland's sovereignty as the Second Polish Republic in 1918, after 123 years of partition by the Russian Empire, the Kingdom of Prussia and the Habsburg Empire.

In other allied countries

"Armistice Day" remains the name of the holiday in France and Belgium, and it has been a statutory holiday in Serbia since 2012. In Italy the end of World War I is commemorated on 4 November, the day of the Armistice of Villa Giusti.

In Denmark, Netherlands and Norway, the end of World War I is not commemorated as the three countries remained neutral. Denmark instead observes "Flagday" on 5 September in commemoration of both living and dead soldiers who served in any conflict. The same counts for 4 May in Netherlands.