University of Alabama School of Medicine

The University of Alabama School of Medicine at UAB, or UAB School of Medicine as it is more commonly known, is a public medical school located in Birmingham, Alabama with branch campuses in Huntsville, Montgomery, and at the University of Alabama College of Community Health Sciences in Tuscaloosa. Residency programs are also located in Selma, Huntsville and Montgomery.

The School of Medicine has nearly 900 students and 1,200 residents and fellows, 1,100 faculty in 23 academic departments and more than 1,100 full-time faculty who attract more than $200 million in NIH funding. The UAB School of Medicine is home of The Kirklin Clinic, a multi-disciplinary medical home; University Hospital, one of the largest academic hospitals in the country; and faculty serve the new Children's of Alabama hospital.[3]

Dr. Tinsley R. Harrison became dean of the new medical school and chairman of the Department of Medicine in 1950. Dr. Harrison began a program of recruitment aimed at making the school a major research and health care center.

In 1966, Dr. John W. Kirklin joined UAB as chairman of the Department of Surgery and Surgeon-In-Chief for University Hospital. Dr. Kirklin brought his knowledge and expertise from Mayo Clinic down to Alabama. He was most noted for revolutionizing cardiovascular surgery through his development and refinement of the heart-lung machine. From his legacy, the University of Alabama School of Medicine and the hospital have continued to be leaders in the healthcare industry. 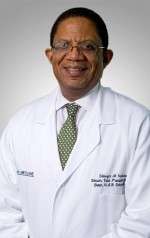 On Aug. 15, 2013, UAB announced Selwyn Vickers, M.D., would be the next senior vice president for Medicine and dean of the School of Medicine effective Oct. 15, 2013. Vickers, 53, spent his formative years as a young faculty member at UAB, beginning in 1994, and he directed the section of gastrointestinal surgery from 2000 to 2006. He is currently the Jay Phillips Professor and Chair of the Department of Surgery at the University of Minnesota Medical School.[4]

The School of Medicine maintains a branch campus in Huntsville affiliated with Huntsville Hospital. The Huntsville campus was originally a part of the University of Alabama in Huntsville, however in 1974 UAB assumed control over the Huntsville program.

UAB's Montgomery campus is a collaborative effort among UAB, Baptist Health and the city of Montgomery. Beginning in May 2014, 10 third-year medical students will begin taking classes in Montgomery. In 2015, the incoming class size will expand to 20.

This article is issued from Wikipedia - version of the 1/14/2016. The text is available under the Creative Commons Attribution/Share Alike but additional terms may apply for the media files.