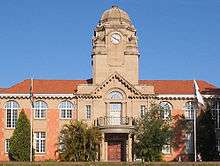 The main clock tower of Old Main Building, on the Pietermaritzburg campus. 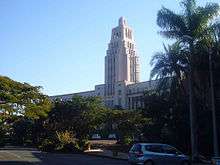 The Memorial Tower Building on the Howard College Campus in Durban, University of KwaZulu-Natal

The university is governed in accordance with the Higher Education Act of 1997,[5] and its constitution is specified in the Statute of the University of KwaZulu-Natal,[6] as approved by the South African Minister of Education and the Parliament of South Africa.

In the statute, the university consists of:

The university is made up of four colleges, which are in turn made up of several schools.[8] In most cases, a subdivision is spread across one or more of the university's campuses. For example, the Chemistry is in both the Pietermaritzburg and Westville campuses.[9]

College of Agriculture, Engineering and Science

College of Law and Management Studies

An institute built in cooperation with the Howard Hughes Medical Institute is the new KwaZulu-Natal Research Institute for Tuberculosis and HIV, opened in 2012. It is on the Nelson Mandela School of Medicine campus.

Pietermaritzburg campus was the main location of the University of Natal and its predecessor, the Natal University College, until the opening of the Howard College campus in Durban. This campus contains the university's oldest structure, Old Main Building, built in 1912.[10] Pietermaritzburg campus offers a broad range of academic degrees and is the only UKZN campus providing training in agriculture, theology and fine arts.[10]

Howard College campus was the Durban location of the University of Natal until the 2004 merger. It spans the Berea Ridge. Howard College offers a wide range of degrees, with a large engineering department consisting of Electrical engineering and Chemical engineering. The College of Humanities and College of Law and Management are also positioned on this campus together with the Centre For Creative Arts (CCA) and the Elizabeth Sneddon Theatre which host annually the Durban International Film Festival (DIFF), Poetry Africa, Time of the Writer and the creative dance festival JOMBA! which is produced by the FlatFoot Dance company.

Westville campus is in and environmental conservancy in Westville, about 20 km West of Durban.[10] It was formerly the site of the University of Durban-Westville before the 2004 merger. Westville offers a range of degrees, and will soon be the main home of the disciplines of commerce and management.[10]

Nelson Mandela medical school campus, created in 1950, was originally a racially segregated part of the University of Natal.[10] It was one of the few tertiary institutions legally allowed to provide education to black people under apartheid. It was granted Nelson Mandela's name on its 50th anniversary in 2000. The medical school is the home of health sciences.

Edgewood campus is located in Pinetown, east of Durban. The buildings originally formed the Edgewood College of Education, which was incorporated into the University of Natal in 2001.[10] Edgewood is the main location of the university's Faculty of Education.[10]

UKZN was ranked fourth out of the universities in South Africa by the Times Higher Education World University Rankings.[11]

UKZN's website was ranked sixth out of university websites in South Africa (and 1,051st worldwide) in the January 2011 edition of the Webometrics Ranking of World Universities.[12]

Main article: Controversies at the University of KwaZulu-Natal

There have been a number of controversies at the University of KwaZulu-Natal since its foundation.

Firstly, there have been several staff strikes and student strikes,[13][14][15][16][17] with some strikes from 2009 onward involving police intervention and the use of riot control measures, as well as violence on the part of some strikers.[18][19]

Secondly, there have been a series of legal and disciplinary actions taken by senior university management against academics for speaking in public about the university.[20][21][22][23] These actions have drawn wide criticism from academics and from organisations such as Cosatu and UNESCO.[24]

As the university has only existed since 2004, very few of its graduates have had the opportunity to attain great fame. There are, however, numerous notable alumni of its founding institutions: