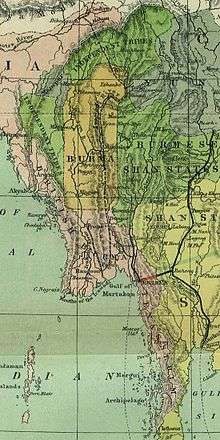 Political geography of Burma as understood by the British c. 1885. Upper Burma in orange; British Burma (Lower Burma) and other British possessions in pink

In the Burmese language, people originating from Upper Burma are typically called a-nya tha (အညာသား), whereas those from Lower Burma are called auk tha (အောက်သား).

The term was first used by the British to refer to the central and northern area of what is now the country of Myanmar (Burma). After the Second Anglo-Burmese War of 1852, Lower Burma was annexed by the British Empire, while Upper Burma remained independent under the Kingdom of Burma until the Third Anglo-Burmese War of 1885. Upper Burma was also known as Burma proper and the Kingdom of Ava. Historically, Upper Burma was predominantly Bamar (whereas Lower Burma was historically Mon-speaking until the early 19th century), while the Frontier Areas, as designated by the colonial administration, included ethnic minority areas, such as the Shan States and modern Kachin State.

This distinction between Upper and Lower Burma is also found in some government departments (for instance, the Ministry of Education has departments assigned to Upper or Lower Burma), while some newspapers make a distinction between the two bodies. The Burmese language edition of the The Myanmar Times is an example; the newspaper devotes a section to news from Upper Burma.[1] In terms of linguistic differences, there are minute differences between the variants of Burmese spoken by Upper Burmese, especially in vocabulary choice (such as kinship terms that differentiate the maternal and paternal sides of a family, which is not made in Lower Burmese speech). However, there is remarkable uniformity in the Burmese spoken throughout the Irrawaddy River valley, which also includes the delta-lying and coastal region of Lower Burma.