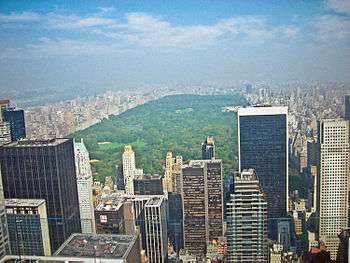 Central Park, the most visited urban park in the United States and one of the world's most visited tourist attractions,[1] is surrounded by the skyscrapers of Manhattan in New York City. 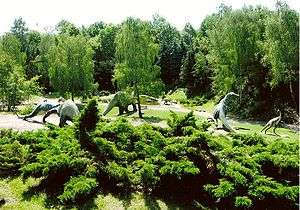 Parque Tres de Febrero, in Buenos Aires, Argentina, has a lake, a rose garden and a planetarium, among other attractions.

An urban park/metropolitan park, also known as a municipal park (North America) or a public park, public open space, or municipal gardens (United Kingdom), is a park in cities and other incorporated places to offer recreation and green space to residents of, and visitors to, the municipality. The design, operation and maintenance is usually done by government, typically on the local level, but may occasionally be contracted out to a private sector company.

A park is an area of open space provided for recreational use, usually owned and maintained by a local government. Grass is typically kept short to discourage insect pests and to allow for the enjoyment of picnics and sporting activities. Trees are chosen for their beauty and to provide shade.

Some early parks include the La Alameda de Hércules, in Seville, a promenaded public mall, urban garden and park built in 1574, within the historic center of Seville; the City Park, in Budapest, Hungary, which was property of the Batthyány family and was later made public.

An early purpose-built public park, although financed privately, was Princes Park in the Liverpool suburb of Toxteth. This was laid out to the designs of Joseph Paxton from 1842 and opened in 1843. The land on which the park was built was purchased by Richard Vaughan Yates, an iron merchant and philanthropist, in 1841 for £50,000. The creation of Princes Park showed great foresight and introduced a number of highly influential ideas. First and foremost was the provision of open space for the benefit of townspeople and local residents within an area that was being rapidly built up. Secondly it took the concept of the designed landscape as a setting for the suburban domicile, an idea pioneered by John Nash at Regent's Park, and re-fashioned it for the provincial town in a most original way. Nash's remodelling of St James's Park from 1827 and the sequence of processional routes he created to link The Mall with Regent's Park completely transformed the appearance of London's West End. With the establishment of Princes Park in 1842, Joseph Paxton did something similar for the benefit of a provincial town, albeit one of international stature by virtue of its flourishing mercantile contingent. Liverpool had a burgeoning presence on the scene of global maritime trade before 1800 and during the Victorian era its wealth rivalled that of London itself.

The form and layout of Paxton's ornamental grounds, structured about an informal lake within the confines of a serpentine carriageway, put in place the essential elements of his much imitated design for Birkenhead Park. The latter was commenced in 1843 with the help of public finance and deployed the ideas he pioneered at Princes Park on a more expansive scale. Frederick Law Olmsted visited Birkenhead Park in 1850 and praised its qualities. Indeed, Paxton is widely credited as having been one of the principal influences on Olmsted and Calvert's design for New York's Central Park of 1857.

A concert in Chicago's Lincoln Park circa 1907.

In The Politics of Park Design: A History of Urban Parks in America, (Cambridge, Massachusetts: MIT Press, 1982), Professor Galen Cranz identifies four phases of park design in the U.S. In the late 19th century, large tracts of land on the outskirts of cities were purchased by city governments to create "pleasure grounds": semi-open, charmingly landscaped areas whose primary purpose was to allow city residents, especially the workers, to relax in nature. As time passed and the urban area grew around the parks, land in these parks was used for other purposes, such as zoos, golf courses and museums. These parks continue to draw visitors from around the region and are considered regional parks, because they require a higher level of management than smaller local parks. According to the Trust for Public Land, the three most visited municipal parks in the United States are Central Park in New York, Lincoln Park in Chicago, Mission Bay Park in San Diego.[5]

In the early 1900s, according to Cranz, U.S. cities built neighborhood parks with swimming pools, playgrounds and civic buildings, with the intention of Americanizing the immigrant residents. In the 1950s, when money became available after World War II, new parks continued to focus on both outdoor and indoor recreation with services, such as sports leagues using their ball fields and gymnasia. These smaller parks were built in residential neighborhoods, and tried to serve all residents with programs for seniors, adults, teens and children. Green space was of secondary importance.

As urban land prices climbed, new urban parks in the 1960s and after have been mainly pocket parks. One such example of a pocket park is Chess Park in Glendale, California. This award winning park was given an award by the American Society of Landscape Architects.[6] These small parks provide greenery, a place to sit outdoors, and often a playground for children.

All four types of park continue to exist in urban areas. Because of the large amount of open space and natural habitat in the former pleasure grounds, they now serve as important wildlife refuges, and often provide the only opportunity for urban residents to hike or picnic in a semi-wild area. However, these parks can be targeted by city managers or politicians as sources of free land for other uses. Partly for this reason, some of these large parks have "friends of X park" advisory boards that help protect and maintain their semi-wild nature.

Millennium Park is an urban park, that is partitioned into areas with various special uses.

Parks can be divided into active and passive recreation areas. Active recreation is that which has an urban character and requires intensive development. It often involves cooperative or team activity, including playgrounds, ball fields, swimming pools, gymnasiums, and skateparks. Active recreation such as team sports, due to the need to provide substantial space to congregate, typically involves intensive management, maintenance, and high costs. Passive recreation, also called "low intensity recreation" is that which emphasizes the open-space aspect of a park and allows for the preservation of natural habitat. It usually involves a low level of development, such as rustic picnic areas, benches and trails. Passive recreation typically requires little management and can be provided at very low costs. Some open space managers provide nothing other than trails for physical activity in the form of walking, running, horse riding, mountain biking, snow shoeing, or cross-country skiing; or sedentary activity such as observing nature, bird watching, painting, photography, or picnicking. Limiting park or open space use to passive recreation over all or a portion of the park's area eliminates or reduces the burden of managing active recreation facilities and developed infrastructure. Many ski resorts combine active recreation facilities (ski lifts, gondolas, terrain parks, downhill runs, and lodges) with passive recreation facilities (cross-country ski trails).

Many smaller neighborhood parks are receiving increased attention and valuation as significant community assets and places of refuge in heavily populated urban areas. Neighborhood groups around the world are joining together to support local parks that have suffered from urban decay and government neglect.

A linear park is a park that has a much greater length than width. A typical example of a linear park is a section of a former railway that has been converted into a park called a rail trail or greenway (i.e. the tracks removed, vegetation allowed to grow back). An example of a strong linear park in North America is the Village of Yorkville Park in Toronto, Canada. This park won an award from the American Society of Landscape Architects.[7] Parks are sometimes made out of oddly shaped areas of land, much like the vacant lots that often become city neighborhood parks. Linked parks may form a greenbelt.