Birkenhead Park is a public park in the centre of Birkenhead, in the Metropolitan Borough of Wirral, in Merseyside, England. It was designed by Joseph Paxton and opened on 5 April 1847. It is generally acknowledged as the first publicly funded civic park in the world.[1][2] Paxton had earlier designed Princes Park, Liverpool, a private development.

In 1841 an Improvement Commission – part of Birkenhead's local government – proposed the idea of a municipal park. A Private Act of Parliament allowed it to use public money to buy 226 acres (91 ha) of marshy grazing land on the western edge of Birkenhead. Plots of land on the edge of the proposed park were then sold off in order to finance its construction. Although some large houses and private villas were initially built by local merchants and wealthier business people, the Long Depression in the latter 19th century would mean that many plots remained undeveloped well into early 20th century.

The Improvement Commission chose Paxton to design the park and Edward Kemp as the works supervisor because both had previously worked on redesigning the gardens at Chatsworth House. The park, which took five years to build, was designed to be natural and informal rather than a structured neatly arranged urban garden. Several miles of drainage pipes were lain to remove the water from the marshy land. The park also led to the diversion of Old Bidston Road and the loss of a direct route between Claughton and Woodside. During construction, hundreds of tonnes of stone and earth was moved to create well-drained terraces, hills, rockeries and lakes. Paxton planted numerous trees and shrubs at various places so visitors would enjoy the surprise of unexpected views or hidden features as they wandered through the park. Buildings included the Swiss Bridge, Boathouse, Norman Lodges, Gothic Lodge, Castellated Lodge and Italian Lodge. The Grand Entrance, which is one of several into the park, was built to look like a classical triumphal arch. As many as 10,000 people attended the official opening in 1847. 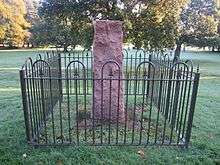 During the First World War, part of the park was used as a training ground by the 3rd Battalion of the Cheshire Regiment. Recruits stayed at the Birkenhead Barracks on Grange Road West. Conscientious objectors were sent to the 3rd Cheshires because the battalion had a tough reputation. The family of a local trade unionist and "conchie", George Beardsworth, watched as he was repeatedly beaten and thrown over an obstacle course in the park. Although his treatment at Birkenhead led to questions in Parliament and a court case against the officers and men involved, no one was ever censured or prosecuted.[3]

In 1917 the National Eisteddfod of Wales ("The Eisteddfod of the Black Chair"), which was attended by Prime Minister David Lloyd George, was held within the park. The park had already paid host to the event in 1878 and 1879.

During the Second World War the area was damaged by bombs; a Spitfire also made a crash landing in the park.

The park became run down and neglected towards the end of the part of the 20th century. Beginning in the late 2000s, it has undergone major restoration work. A purpose-built visitors centre has been installed and work done to restore its original buildings and bridges as well as tidy up the lakes and parklands, and unblock the drainage system.

In 1850, American landscape architect Frederick Law Olmsted arrived by ship in Liverpool. During his stay in Northwest England, he paid a visit to Birkenhead Park along with several other public gardens. He noted Birkenhead was "a model town” which was built "all in accordance with the advanced science, taste, and enterprising spirit that are supposed to distinguish the nineteenth century". In 1858, he and Calvert Vaux won the competition to design a new park for the rapidly growing city of New York.

Olmsted, who was influenced by the park, was greatly impressed by Paxton's designs. In his book Walks and Talks of an American Farmer in England, he wrote about its social value as an aesthetic form:

five minutes of admiration, and a few more spent studying the manner in which art had been employed to obtain from nature so much beauty, and I was ready to admit that in democratic America there was nothing to be thought of as comparable with this People’s Garden.[4]

Olmsted also commented on the "perfection" of the park's gardening:

I cannot undertake to describe the effect of so much taste and skill as had evidently been employed; I will only tell you, that we passed by winding paths, over acres and acres, with a constant varying surface, where on all sides were growing every variety of shrubs and flowers, with more than natural grace, all set in borders of greenest, closest turf, and all kept with consummate neatness.[4]

Birkenhead Park was used as a template for the creation of Sefton Park, which opened in Liverpool in 1872. 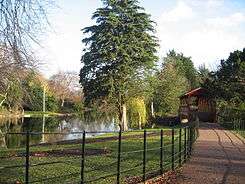 Approaching the 'Swiss Bridge' over the lake. 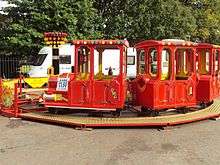 The park was designated a conservation area in 1977 and declared a Grade I listed landscape by English Heritage in 1995.[5]

Birkenhead Park underwent a five-year £11.5 million renovation completed in 2007, funded jointly by the Heritage Lottery Fund, Wirral Waterfront SRB, Wirral Council, and the European Union via the Objective One programme.[7] All of the paths have been improved, trees and shrubs have been planted, the lakes have been emptied, cleaned and reshaped and most of the original features have been restored to their former Victorian glory.[8] Additionally, a modern glass-fronted building houses a coffee-house style café, Cappuccino's. Unusually for a park of this nature, it is possible for private motorists to drive around the outer circular road, to park freely anywhere along it, and to drive directly to the café. Most of the children's playground has also been updated.

The Swiss Bridge, a 23-foot (7.01 m) pedestrian span of stringer construction built in 1847, is unique as being the only covered bridge of traditional wooden construction (similar to North American and European covered bridges) in the United Kingdom. It was modelled after similar wooden bridges in Switzerland.

Birkenhead Parkrun is a free weekly timed 5 km (3.1 mi) race run every Saturday. It starts at the Claughton Village entrance to the park and consists of three laps round the upper half of the park.

Birkenhead Park Cricket Club opened in 1847. Its clubhouse was built in 1849. Today it plays in the Liverpool and District Cricket Competition. Football was permitted in the park from 1861.

Birkenhead Park FC began playing rugby in the park in 1871. The club has hosted major national and international matches including the All Blacks in 1978.