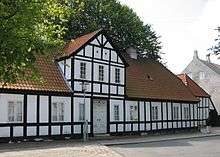 The old timber-framed house of the rural dean from 1773-74, at the headquarters of Vendsyssel Historical Museum in Hjørring.

The Vendsyssel Historical Museum (VHM) is a regional museum, preserving and exhibiting the history of the region of Vendsyssel in Denmark.

The museum works as an umbrella organization for a total of five departments and six exhibitions in Vendsyssel. It was initiated in 1889 and attained recognition by the State of Denmark in 1959.

The VHM has extensive collections on the natural history of the region and also conducts and archives archaeological excavations. Some of the excavated items originated as early as 10,000 BC.

The museum exhibits in Hjørring, two places in Hirtshals, in Mosbjerg and at Rubjerg Knude: