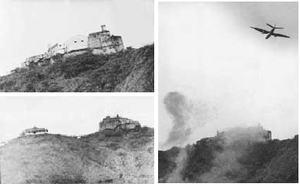 Bombardment of Solano Castle during the June 1962 "Porteñazo" uprising, in which the Second Battalion of the Marine Corps participated

The Venezuelan Marines trace their history back to the combined marines corps of Gran Colombia which was formed in 1822 and was dissolved in 1829 following Venezuela's secession from Gran Colombia. This was surprising as the Marine Corps of the Confederation largely consisted of Venezuelans. The Marines' most notable engagement in this era was the Battle of Lake Maracaibo (1823). During this time the Marines were mostly manned by personnel by the Grand Colombian Army, and used army-style ranks while wearing naval uniforms.

In the beginning of the 20th century, during the term of President Cipriano Castro, the Navy had a marine artillery command manned by Venezuelan Army personnel tasked to provide artillery crews aboard its vessels.

After years of inactivity the Venezuelan Marines were finally reformed at Puerto Cabello on 1 July 1938 when a company was formed to provide ships detachments. A second company was formed on 8 December 1939 and a third in 1943. They were then merged into the 1st Marine Battalion (Battalion de Infanteria de Marina -BIM) Simon Bolivar, headquartered at Puerto Cabello, on 11 December 1945. This date is looked upon as the official anniversary of the marines. In February 1946 a second BIM General Rafael Urdaneta was raised at Puerto Cabello and the original BIM became the 1st battalion and was then moved to Marquetia. Marine headquarters was then located in Caracas. The third Battalion Mariscal Antonio Jose de Sucre was then formed up in 1958 at Carupano, the very same year the Marines became a full command of the Navy. In the late 1970s the Amphibious Assault Company, equipped with LVTP-7s and the Marine Anti-Aircraft Artillery Company, equipped with M42 Dusters, were raised. The 4th Battalion General Francisco de Miranda was raised in the early 1980s and initially consisted of the Amphibious Assault Company and the Marine Anti-Aircraft Artillery Company.[1]

Between 1975 and 1994 the marines underwent two new adjustments to its organization. On 11 December 2000, by presidential decree, the Marine Infantry were honored with the name Gen. Simón Bolívar Marine Division. On 15 October 2003 the Naval Police Command Gran Mariscal de Ayacucho was integrated into the ranks and organization of the Marines.

On 5 April 2005, the Marine Corps of Engineers, was activated and was later placed directly under the General Command of the Navy by Presidential Resolution No. DG-031,764 dated 21 July 2005. In turn, the Naval Police Brigade "Gran Mariscal de Ayacucho Antonio José de Sucre" was formally reestablished as the Naval Police Command ceasing its dependence on the Division and remained attached to the Naval Operations Command directly.

Headquartered in Meseta de Mamo, Vargas, the estimated numerical strength of this unit is of approx. 11,000 men and women. Its mission is to "enlist and direct its units in order to form the disembarking force and/or support of amphibious or special operations; executing naval safeguarding and environmental policing, as well as actively participating in the national development". It is divided into 9 active brigades and a headquarters unit.

As of 2016, Vice Admiral Giuseppe Alessandrello Cimadevilla is the current commandant of the Marine Corps.

Each border/riverine command consists of the following:

These units have a base of operations and five naval outposts with a Marine company and no less than 6 assault and river combat speedboats each.

Naval Infantry's equipment is the same standard issue as the rest of the armed forces, excluding Special Forces armaments. Armored units and heavy equipment of the Naval Infantry is the following:

Other models in service include Caroní, Manapiare, Caimán, 22 Apure/Apure II assault launches, (all designed and made in Venezuela) and US Coibas.