Venues of the 1988 Summer Olympics 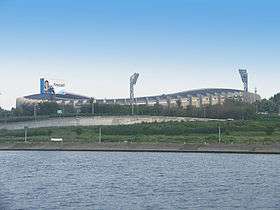 Taenung International Shooting Range was constructed in 1972 following the Summer Olympics that took place in Munich.[20] Six years later, the venue made history by becoming the first to host a world championships for shooting sports.[20][28] This venue was renovated in 1987-8 before the 1988 Games to comply with International Shooting Sport Federation (ISSF, then Union International de Tir (UIT)) standards.[20]

The success of the UIT World Shooting Championships that year led to the formation of a bid committee to bring the 1988 Games to Seoul. Among Seoul's competitors were Melbourne, Australia, host of the 1956 Summer Olympics, and Nagoya, Japan. Seoul submitted its bid to the International Olympic Committee (IOC) in late 1980 though Melbourne withdrew its bid in early 1981. At the 1981 IOC meeting in Baden-Baden, West Germany (Germany since October 1990), the IOC selected Seoul to host the 1988 Summer Olympics.[30]

Venues for the Seoul Sports Complex were constructed between 1973 and 1984.[31] Except for Mongchon Tosong and the Tongillo Road Course, all of the other venues were completed or renovated by the summer of 1986.[32] Many of the venues would play host to the Asian Games in 1986 which would serve as test events for the 1988 Summer Olympics.[31][32][33]

The men's marathon course was run in hot weather along a route lined with 36,000 police personnel.[34] At the Han River Regatta Course/ Canoeing Site during the men's K-1 1000 m canoeing event, it was announced that Australia's Grant Davies had won the event, but that was reversed a few minutes later by a jury of the International Canoe Federation that American Greg Barton had won the event in a photo finish by 0.005 seconds.[35] In the men's rowing coxless fours final, the Soviet team finished last to one of their seats breaking in the middle of the race.[36]

During the fifth race of the sailing Finn event near Busan, Canada's Lawrence Lemieux was in second place when he noticed Joseph Chan of Singapore in the water 25 yd (23 m) from his capsized boat.[37] Lemieux abandoned his position and rescued Chan and Chan's Singapore teammate.[37][38] Even though Lemieux finished last in the race, the IOC gave him second place for the race as a result of Lemieux's heroic efforts.[39][40] Lemieux would be awarded the IOC Pierre de Coubertin medal at the Finn medal awards ceremony by President Juan Antonio Samaranch.[38]

Olympic Stadium continues to be of use to many events as of 2010.[42] When Korea co-hosted the 2002 FIFA World Cup with Japan, none of the 1988 Summer Olympic venues used for football were used for those events.[43] Dongdaemun Stadium was demolished in 2008.[24]