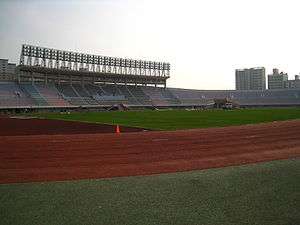 The complex consists of the Seongnam Stadium, Field hockey, Indoor Arena and so on.

It is a multi-purpose stadium in Seongnam, South Korea. It was built in December 1984 and used for 1988 Summer Olympics Seoul field hockey matches, but it is currently used mostly for football matches. It was the main stadium of Seongnam Ilhwa Chunma (currently Seongnam FC) by 2004 - now Seongnam FC uses Tancheon Stadium as their home stadium for most of their games. The stadium holds 27,000 people (21,242 seats) and the city government is considering reconstruction of the stadium, because of its decrepit condition.