Sessina began training in rhythmic gymnastics in 1993 and eventually moved to the Russian training center in Novogorsk. At the 2002 European Championships in Granada, she performed only one routine, but was noticed because of her flexibility, stability and clean performance. The same year, she took part in an international event in Thiais (France) and won some medals on various apparatus. In 2003, she performed well on the Grand Prix circuit.

In 2005, Sessina competed at the 2005 World Championships. She placed fifth in all-around qualifications but did not advance into the finals because teammates Olga Kapranova and Irina Tchachina placed ahead of her. She was also sent to the 2005 European Championships.

In 2006, Sessina won the all-around competition at the 2006 European Championships in Moscow, beating teammate and Olympic champion Alina Kabaeva. She won the 2006 Grand Prix Final all-around in Innsbruck and won three events of the FIG World Cup Final in Mie, Japan. 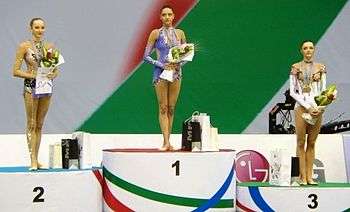 Sessina at the 2009 European Championships

Sessina competed for a spot at the 2008 Olympics but struggled due to injury and was beaten by compatriots Evgenia Kanaeva and Olga Kapranova. She won a gold medal in rope and bronze in hoop at the 2008 World Cup Final in Benidorm and ended her season with silver in the all-around at the 2008 Grand Prix Final.

Sessina won silver medals in All-around, rope, hoop and ribbon at the 2009 European Championships held in Baku, Azerbaijan. She retired from competition following the event.

After her retirement, Sessina was elected to the FIG Athletes Commission as a rhythmic gymnastics representative.[1]