The World Games of 2005 took place in Duisburg, Germany from 14 July 2005 until 24 July 2005. Three cities namely Bottrop, Mülheim an der Ruhr, and Oberhausen, also held some of the competition events.[1] More than 3,000 athletes competed in 39 non-Olympic sports. 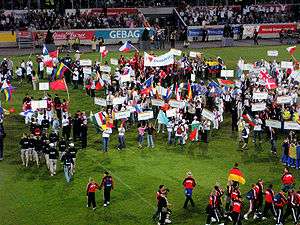 Athletes at the closing ceremony

World Games sports not included in 2005

The medal tally during the seventh World Games is as follows. Russia won the most gold medals and tied with Germany in overall medals won in this edition's official sports.[2]