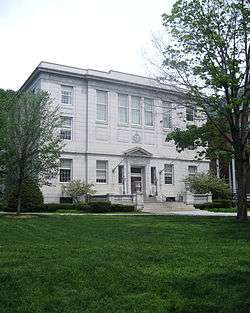 Interior of the courtroom 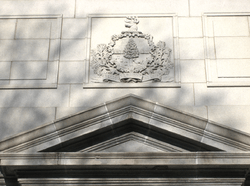 Detail of Vermont's coat of arms above the Court's main entrance.

The Court consists of a chief justice and four associate justices; the Court mostly hears appeals of cases that have been decided by other courts. The Supreme Court justices are appointed by the Governor of Vermont with confirmation by the Vermont Senate. When a judicial vacancy occurs, the judicial nominating board submits to the governor the names of as many persons as it deems qualified for appointment.[1] All Supreme Court justices come up for retention at the same time every six years. The next retention date is March 31, 2017. The Joint Committee on Judicial Retention reviews a justice's performance during the previous term and recommends to the Vermont General Assembly whether the justice should be retained. The committee consists of four House members appointed by the Speaker of the House and four Senate members appointed by the Committee on Committees. After open debate and discussion, the General Assembly votes by secret ballot, with a majority having to vote against reappointment for a justice to be denied another term.[2]

In addition to the retention process, any Vermont judge may be removed at any time in one of two ways: (1) Judges may be impeached by a two-thirds vote of the General Assembly and convicted by a two-thirds vote of the Senate, and (2) a Judicial Conduct Board investigates complaints of judicial misconduct or disability and recommends any necessary action to the Supreme Court.[3]

The current chief justice is Paul L. Reiber. Reiber was appointed Associate Justice in October 2003 by Gov. Jim Douglas and then sworn in as the Chief Justice of the Court on December 17, 2004.[4]

The Vermont Supreme Court meets in a granite Beaux Arts style building in Montpelier just east of the Vermont State House and immediately west of the The Pavilion Office Building.

The building site was the original site of the first Vermont State Building, a three storey wooden colonial Georgian structure built in 1808 by Sylvanus Baldwin.[5]

Main article: List of Justices of the Vermont Supreme Court

The original constitution called for a "Council of Censors" which provided oversight for the court and its membership. The Council was abolished in 1870.[7]