Many species of henbane require vernalization before flowering.

Vernalization (from Latin vernus, "of the spring") is the induction of a plant's flowering process by exposure to the prolonged cold of winter, or by an artificial equivalent. After vernalization, plants have acquired the ability to flower, but they may require additional seasonal cues or weeks of growth before they will actually flower. Vernalization is sometimes used to refer to herbal (non-woody) plants requiring a cold dormancy to produce new shoots and leaves[1] but this usage is discouraged. [2]

Many plants grown in temperate climates require vernalization and must experience a period of low winter temperature to initiate or accelerate the flowering process. This ensures that reproductive development and seed production occurs in spring and summer, rather than in autumn.[3] The needed cold is often expressed in chill hours. Typical vernalization temperatures are between 5 and 10 degrees Celsius (40 and 50 degrees Fahrenheit).

For many perennial plants, such as fruit tree species, a period of cold is needed first to induce dormancy and then later, after the requisite period of time, re-emerge from that dormancy prior to flowering. Many monocarpic winter annuals and biennials, including some ecotypes of Arabidopsis thaliana[4] and winter cereals such as wheat, must go through a prolonged period of cold before flowering occurs.

In the history of agriculture, farmers observed a traditional distinction between "winter cereals," whose seeds require chilling (to trigger their subsequent emergence and growth), and "spring cereals," whose seeds can be sown in spring, and germinate, and then flower soon thereafter.[2] The word "vernalization" is a translation of "яровизация" ("jarovization") a word coined by Trofim Lysenko to describe a chilling process he used to make the seeds of winter cereals behave like spring cereals ("Jarovoe" in Russian).[2] Scientists had also discussed how some plants needed cold temperatures to flower, as early as the 18th century, with the German plant physiologist Gustav Gassner often mentioned for his 1918 paper.[2][5]

Lysenko's 1928 paper on vernalization and plant physiology drew wide attention due to its practical consequences for Russian agriculture. Severe cold and lack of winter snow had destroyed many early winter wheat seedlings. By treating wheat seeds with moisture as well as cold, Lysenko induced them to bear a crop when planted in spring.[5] Later however, Lysenko inaccurately asserted that the vernalized state could be inherited - i.e., that the offspring of a vernalized plant would behave as if they themselves had also been vernalized and would not require vernalization in order to flower quickly.[6]

Early research on vernalization focused on plant physiology; the increasing availability of molecular biology has made it possible to unravel its underlying mechanisms.[6] For example, a lengthening daylight period (longer days), as well as cold temperatures are required for winter wheat plants to go from the vegetative to the reproductive state; the three interacting genes are called VRN1, VRN2, and FT (VRN3).[7]

Due to plant flowering requiring the successful co-operation of several metabolic pathways, computer models that incorporate vernalization have also been made.[8] 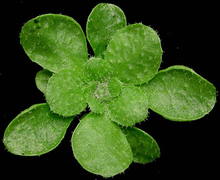 Arabidopsis thaliana rosette before vernalization, with no floral spike

Arabidopsis thaliana ("thale cress") is a much-studied model for vernalization. Some ecotypes (varieties), called "winter annuals", have delayed flowering without vernalization; others ("summer annuals") do not.[9] The genes that underlie this difference in plant physiology have been intensively studied.[6]

The reproductive phase change of A. thaliana occurs by a sequence of two related events: first, the bolting transition (flower stalk elongates), then the floral transition (first flower appears).[10] Bolting is a robust predictor of flower formation, and hence a good indicator for vernalization research.[10]

At the molecular level, flowering is repressed by the protein Flowering Locus C (FLC), which binds to and represses genes that promote flowering, thus blocking flowering.[3][11] Winter annual ecotypes of Arabidopsis have an active copy of the gene FRIGIDA (FRI), which promotes FLC expression, thus repression of flowering.[12] Prolonged exposure to cold (vernalization) induces expression of VERNALIZATION INSENSTIVE3, which interacts with the VERNALIZATION2 polycomb-like complex to reduce FLC expression through chromatin remodeling.[13] The epigenetic silencing of FLC by chromatin remodeling is also thought to involve the cold-induced expression of antisense FLC COOLAIR[14][15] or COLDAIR transcripts.[16] Vernalization is registered by the plant by the stable silencing of individual FLC loci.[17] The removal of silent chromatin marks at FLC during embryogenesis prevents the inheritance of the vernalized state [18]

It is possible to devernalize a plant by exposure to high temperatures subsequent to vernalization. For example, commercial onion growers store sets at low temperatures, but devernalize them before planting, because they want the plant's energy to go into enlarging its bulb (underground stem), not making flowers.[20]