A vestry was the committee for the secular and ecclesiastical government for a parish in England and Wales, which, until this was forbidden in 1850, met in the vestry or sacristy of the parish church, and consequently became known colloquially as the "vestry".

Vestry committees in England and Wales 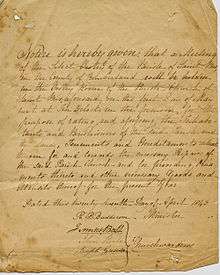 Notice dated April 1843 (which would have been pinned to the church door[1]) calling a meeting of the select vestry of the parish of St Bees, for rating and assessing property in the parish to raise money for the repair of the church and the provision of ornaments and other necessary goods for the coming year. It is signed by the Rev R P Buddicom, vicar of St Bees, and three of the four churchwardens

The vestry committees were not established by any law, but they evolved independently in each parish according to local needs from their roots in medieval parochial governance. By the late 17th century they had become, along with the county magistrates, the rulers of rural England.[3]

In England, until the 19th century, the parish vestry committee was in effect what would today usually be called a parochial church council, but was also responsible for secular parish business, which is now the responsibility of a parish council, and other activities, such as administering locally the poor law.

The original unit of settlement among the Anglo-Saxons in England was the tun or town. The inhabitants met to carry out this business in the town moot or meeting, at which they appointed the various officials and the common law would be promulgated. Later with the rise of the shire, the township would send its reeve and four best men to represent it in the courts of the hundred and shire. However, this local independence of the Saxon system was lost to the township by the introduction of the feudal manorial Court Leet which replaced the town meeting.

The division into ancient parishes was linked to the manorial system, with parishes and manors often sharing the same boundaries.[4] Initially, the manor was the principal unit of local administration and justice in the rural economy, but over time the Church replaced the manorial court as the centre of rural administration, and levied a local tax on produce known as a tithe.[4] The decline of the feudal system and, following the Reformation in the 16th century, the power of the Church, led to a new form of township or parish meeting, which dealt with both civil and ecclesiastical affairs. This new meeting was supervised by the parish priest, probably the best educated of the inhabitants, and it evolved to become the vestry meeting.[5]

As the complexity of rural society increased, the vestry meetings pragmatically acquired greater responsibilities, and were given the power to grant or deny payments from parish funds. Although the vestry committees were not established by any law, and had come into being in an unregulated ad-hoc process, it was highly convenient to allow them to develop. This was convenient when they were the obvious body for administering the Edwardian and Elizabethan systems for support of the poor on a parochial basis. This was their first, and for many centuries their principal, statutory power.

With this gradual formalisation of civil responsibilities, the ecclesiastical parishes acquired a dual nature and could be classed as both civil and ecclesiastical parishes. In England, until the 19th century, the parish vestry was in effect what would today usually be called a parochial church council, but was also responsible for all the secular parish business now dealt with by civil bodies, such as parish councils.

Eventually, the vestry assumed a variety of tasks. It became responsible for appointing parish officials, such as the parish clerk, overseers of the poor, sextons and scavengers, constables and nightwatchmen.

At the high point of their powers, just prior to removal of Poor Law responsibilities in 1834, the vestries spent not far short of one-fifth of the budget of the national government itself.[5] More than 15,600 ecclesiastical parish vestries looked after their own: churches and burial grounds, parish cottages and workhouses, endowed charities, market crosses, pumps, pounds, whipping posts, stocks, cages, watch houses, weights and scales, clocks and fire engines. Or to put it another way: the maintenance of the church and its services, the keeping of the peace, the repression of vagrancy, the relief of destitution, the mending of roads, the suppression of nuisances, the destruction of vermin, the furnishing of soldiers and sailors, even to some extent the enforcement of religious and moral discipline. These were among the multitudinous duties imposed on the parish and its officers, that is to say the vestry and its organisation, by the law of the land, and by local custom and practice as the situation demanded.

This level of activity had resulted in an increasing sophistication of administration. The decisions and accounts of the vestry committee would be administered by the parish clerk, and records of parish business would be stored in a "parish chest" kept in the church and provided for security with three different locks, the individual keys to which would be held by such as the parish priest and churchwardens. 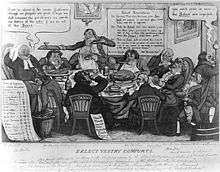 Whilst the vestry was a general meeting of all inhabitant rate-paying householders in a parish,[6] in the 17th century the huge growth of population in some parishes, mostly urban, made it increasingly difficult to convene and conduct meetings. Consequently, in some of these a new body, the select vestry, was created. This was an administrative committee of selected parishioners whose members generally had a property qualification and who were recruited largely by co-option.[6] This took responsibility from the community at large and improved efficiency, but over time tended to lead to governance by a self-perpetuating elite.[4] This committee was also known as the "close vestry", whilst the term "open vestry" was used for the meeting of all ratepayers.

By the late 17th century, the existence of a number of autocratic and corrupt select vestries had become a national scandal, and several bills were introduced to parliament in the 1690s, but none became acts. There was continual agitation for reform, and in 1698 to keep the debate alive the House of Lords insisted that a bill to reform the select vestries, the Select Vestries Bill, would always be the first item of business of the Lords in a new parliament until a reform bill was passed. The first reading of the bill was made annually, but every year the bill never got any further. This continues to this day as an archaic custom in the Lords to assert the independence from the Crown, even though the select vestries have long been abolished.[3] 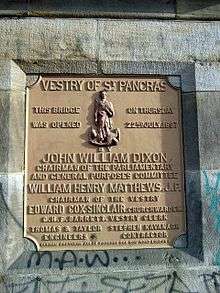 A plaque commemorating an 1897 bridge building initiative in London. George Bernard Shaw was elected to the St Pancras vestry in 1897. It became the Metropolitan Borough of St Pancras in 1900.

A major responsibility of the vestry had been the administration of the Poor Law, but the widespread unemployment following the Napoleonic Wars overwhelmed the vestries, and under the Poor Law Amendment Act 1834 this duty was transferred to elected boards of guardians for single parishes or to poor law unions for larger areas. These new bodies now received the poor law levy and administered the system, and removed a large portion of the income of the vestry and a significant part of its duties.

The vestries escaped the Municipal Corporations Act 1835, which brought more democratic and open processes to municipal bodies, but there was gradual movement to separate the vestry's ecclesiastical and secular duties. The Vestries Act 1850 prevented the holding of meeting in churches, and in London, vestries were incorporated under the Metropolis Management Act 1855 to create properly regulated civil bodies for London parishes, but they did not have any ecclesiastical duties.

As the 19th century progressed the parish vestry progressively lost its secular duties to the increasing number of local boards which came into being and operated across greater areas than single parishes for a specific purpose. These were able to levy their own rate. Among these were the local boards of health created under the Public Health Act 1848, the Burial boards, which took over responsibility for secular burials in 1853, and the Sanitary Districts which were established in 1875. The church rate ceased to be levied in many parishes and was made voluntary in 1868.[7]

However, the proliferation of these local bodies led to a confusing fragmentation of local government responsibilities, and this became a driver for large scale reform in local government, which resulted in the Local Government Act 1894. The problem of so many local bodies was expressed by H H Fowler, President of the Local Government Board, who said in the parliamentary debate for the 1894 Act....

The term vestry continues to be used in some other denominations for a body of lay members elected by the congregation to run the business of a church parish, such as in the Scottish[11] and American Episcopal Churches.