Vio-lence was an American thrash metal band formed in 1985 in the San Francisco Bay Area. They released demo tapes, one EP and 3 LPs between 1985 and 1993. Their most stable line-up was Phil Demmel and Robb Flynn on guitars, Deen Dell on bass, Perry Strickland on drums and Sean Killian on vocals.

After many line-up changes Robb Flynn (former Forbidden guitarist) joined the band. With this line-up, they signed a recording contract with Mechanic Records to release a demo tape in 1986 and a following album.

Soon after releasing their demo tape they entered the studio to record their debut album, called Eternal Nightmare, a seven-track album released in 1988.

Finally in 1990, their second album, Oppressing The Masses was launched on Megaforce Records with better distribution and marketing than their debut, Eternal Nightmare. A video for the song "World in a World" was also filmed.

Internal conflicts in 1992 resulted in the departure of Robb Flynn who would move on to form groove metal band Machine Head. Vio-lence recorded their third and final studio album titled Nothing to Gain, which was released in 1993. It was followed by Perry Strickland's departure and the resulting dissolution of the band.

Vio-lence has re-released its debut album Eternal Nightmare as a 2 disc set including 1986 demo, rare tracks and a live concert.

Initially planning only a few shows as part of the tribute to Testament's Chuck Billy during the Thrash of the Titans benefit on 2001, the band decided to reunite with early guitarist Ray Vegas replacing Robb Flynn.

In addition to their 2005 re-release of Eternal Nightmare, the band released a 7 inch vinyl record containing two demo tracks from their original 1986 demo tape as well as one previously unreleased track. Only 1000 copies were produced and pressed by Bone Crusher Records. The 7 inch collectible was well marketed and advertised, but due to disagreements between the band and the Bone Crusher record producers, only Vio-lence was allowed to distribute and sell the 500 given to them by the producers. A deal was made to distribute a small quantity (about 100) through a Seattle record store, the only known store to stock the item for sale to the public.

A DVD entitled Blood And Dirt was produced by Jerry Allen - (Tales From The Pit video magazine) and released on August 8, 2006 through Megaforce. 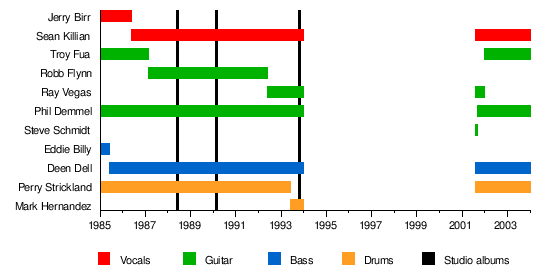