Robert Conrad "Robb" Flynn was born as Lawrence Matthew Cardine in Oakland, California. He was adopted after being abandoned by his birth parents. He has since stated that he does not wish to find his birth parents, with the Machine Head song "Left Unfinished" describing his feelings about them. Flynn cited Black Sabbath as his biggest influence and the reason he plays guitar. Other influences include Bay Area thrash metal bands like Exodus, Metallica, Slayer and hardcore punk/crossover thrash groups such as Dead Kennedys, DRI and Suicidal Tendencies.[2]

He joined the thrash metal band Forbidden (originally Forbidden Evil), while in his graduating year at American High School. He played in this band from 1985 to 1987. He wrote four songs which appeared on their debut album, "Chalice of Blood", "Forbidden Evil", "As Good As Dead" and part of "March into Fire", but left before an album was released to join local thrash metal rivals Vio-lence, alongside present Machine Head guitarist Phil Demmel. Flynn then went on to form the present-day band, Machine Head, whose debut album Burn My Eyes made Flynn a rising metal star.

In January 2005 Flynn was selected as one of the four team captains of Roadrunner United, an act to celebrate the 25th year anniversary of Roadrunner Records.[3] Flynn wrote, produced and recorded guitar on four songs, these were The Rich Man, Independent (Voice of the Voiceless), Army of the Sun and The Dagger and on the latter he sang and wrote lyrics alongside Howard Jones of Killswitch Engage.

Machine Head's album The Blackening (2007) climbed to #54 on the US Billboard after appearing on the charts only two weeks previously; it was also nominated for a Grammy Award, making it by far the band's most successful album. On June 11, 2007, Robb Flynn received the Metal Hammer 2007 Golden God Award.[4] In honour of Debbie Abono and Ronnie James Dio, Robb Flynn recorded and released for free online a cover of Black Sabbath's "Die Young".[5] Abono managed Flynn and Phil Demmel when they were members of Vio-Lence.[6] Flynn had a break-in at his house in which several items, including guitars were stolen. One guitar, the Washburn 333 or "Dimebolt", was given to him by Dimebag Darrell.[7] In 2016 the "Dimebolt" guitar has been returned to Flynn.[8] Machine Head debuted at #22 on the Billboard 200 chart, with Unto The Locust the band's highest performance. They also debuted at #5 on the German music chart. The album has sold over 100,000 copies in the United States.

On 29 January 2016, Machine Head's YouTube channel published a video entitled, "Racism In Metal," which consisted of Rob Flynn evoking the titular issue and criticizing Phil Anselmo for his controversial statements at Dimebash 2016. The video, as of 21 November 2016, has over 1.35 million views.[9] 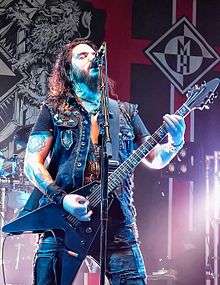 Flynn performing with Machine Head in 2014

Robb used two Ibanez strat styled guitars in the early days of Machine Head, a white one used in 1992 until 1993, and a black one covered with stickers which he used to record Burn My Eyes, which was stolen from his home in 2010 along with a Washburn Dimebolt which Dimebag Darrell had once given to him. For the Burn My Eyes tour he used a Gibson Explorer and a Jackson Soloist, he used these guitars for The More Things Change, after which he switched to a Gibson SG. His Dimebolt and all guitars stolen were returned to him recently by a woman who bought a storage unit which belonged to who stole them, or received it from the person that stole them.

For The Burning Red he began using a Gibson Flying V, which became synonymous with him after this period. In 2002, just before the recording of Through The Ashes of Empires he began using his ESP SP210 baritone guitar. For The Blackening tour he used a custom ESP flying V which was identical to, and often mistaken for a Gibson V. By Unto The Locust he was using a more modified version of his earlier ESP/Gibson V, with this one having mirror inlays of the Machine Head logo on the fretboard and headstock.

Flynn had signed a deal with Epiphone in which he could get signature models based closely on his designs with ESP. His new guitar for this period was the Epiphone Love Death Baritone Flying V, along with a custom Explorer, which he occasionally used on the Locust tour. For the Bloodstone & Diamonds era, Flynn has so far been using several Epiphone Flying V's, including an alternate version of the Love Death V, with this one having a tremolo bar. Currently he uses both his Love Death models, a satin black V, and a glossy black V with white binding and a white pickguard.

In January 2015, Robb posted a picture on his Instagram page, showing his red BC Rich Warlock along with his Gibson SG from 1997, announcing that he was bringing them out of retirement and bringing them on the US leg of the Bloodstone & Diamonds tour.

In December 2013, Robb Flynn and fellow Machine Head guitarist Phil Demmel collaborated with online education site JamPlay.com to put together a series of guitar lessons for aspiring guitarists and members of JamPlay.[10]