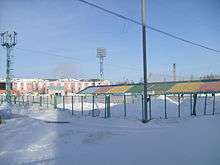 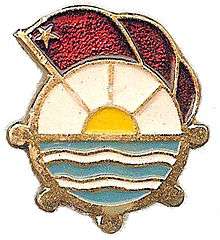 Member pin of the VSS Vodnik, of which the club used to be a part.

Vodnik (Russian: Водник) is a bandy club from Arkhangelsk in Russia. Vodnik was founded in 1925 and in the mid-1990s it became a major team in both Russian and international bandy. During the existence of the Soviet Union the club was a part of the Voluntary Sports Societies of the USSR Vodnik.

Vodnik became Russian champions in 1996 to begin a run of nine national championships in ten seasons, missing out only in season 2000–01 when Yenisey won after scoring the winning goal against them in the last minute. In the Bandy World Cup, Vodnik was the runner-up in 2002 after Swedish Sandvikens AIK, but won the tournament in 2003 and 2004. The team also won the European Cup in 2002, 2003 and 2004.

For the 2005–06 season almost all players left for Dynamo Moscow, when that club had qualified for the highest division again after a few seasons in the second tier.