The Volvo Ocean Race (formerly the Whitbread Round the World Race) is a yacht race around the world, held every three years.[2] Originally named after its initiating sponsor, British Whitbread brewing company, it today carries the name of its current owner, Swedish automobile manufacturer Volvo Cars and Swedish multinational manufacturing company, the Volvo Group. Presently, the Netherlands holds the record of three wins, with Dutchman Conny van Rietschoten the only skipper to win the race twice.

Though the route changes to accommodate various ports of call, the race typically departs Europe in October, and in recent editions has had either 9 or 10 legs, with in-port races at many of the stopover cities. The 2008–09 race started in Alicante, Spain, on October 11, 2008.[2] The route for the 2008–2009 race was altered from previous years to include stopovers in India and Asia for the first time.[3] The 2008–09 route covered nearly 39,000 nmi (72,000 km), took over nine months to complete, and reached a cumulative TV audience of 2 billion people worldwide.[4]

During the nine months of the 2011–12 Volvo Ocean Race, which started in Alicante, Spain in October 2011 and concluded in Galway, Ireland, in July 2012, the teams were scheduled to sail over 39,000 nmi (72,000 km) of the world’s most treacherous seas via Cape Town, Abu Dhabi, Sanya, Auckland, around Cape Horn to Itajaí, Miami, Lisbon, and Lorient.

Each of the entries has a sailing team of 9 professional crew who race day and night for more than 20 days at a time on some of the legs. They each have different jobs on board the boat, and on top of these sailing roles, there are two sailors that have had medical training, as well as a sailmaker, an engineer and a dedicated media crew member.

No fresh food is taken on board, so the crew lives off freeze-dried fare; they will experience temperature variations from −5 to +40 degrees Celsius and will only take one change of clothes.

In 1972 England's Whitbread company and the British Royal Naval Sailing Association agreed to sponsor a globe-circling regatta, which would be called the 'Whitbread Round the World Yacht Race'. 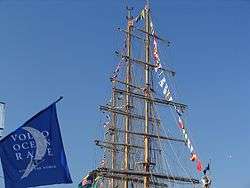 17 yachts and 167 crew started the first race of 27,500 nmi (50,900 km), which began from Portsmouth, United Kingdom on September 8, 1973. Approximately 3000 spectator boats set out to witness the historic start.[5] The first race was won by a Mexican Swan 65 yacht called Sauyla II and later on in 2016, this great adventure will be presented in a feature-length documentary film called The Weekend Sailor.[6][7][8]

The original course was designed to follow the route of the square riggers, which had carried cargo around the world during the 19th Century.[9]

From 2001 the ownership of the race was taken over by Volvo and Volvo Cars and the race was renamed the ‘Volvo Ocean Race’. Stopover ports were added in Germany, France, and Sweden being Volvo's three biggest car markets in Europe.

Winning the race does not attract a cash prize, as the feat of competing is presented as sufficient reward.

Many of the contestants in the Volvo Ocean Race tend to go into other professional teams after the race, such as certain members of Oracle Team USA.

The worst weather conditions are usually encountered in the Southern Ocean where waves sometimes top 100 feet (30 m) and winds can reach 60 knots (110 km/h).

The 2008–09 race featured "Stealth play", a tactic that allowed a crew to hide its position from its competitors for a period of 12 hours. It was designed to add a tactical dimension to the race, whereby a team might opt to make a break from the fleet without the rest of the competitors knowing what they are doing and where they are on the race track. The ploy can first be used on leg one, leg two, leg five, leg six and leg seven. If it is not used on one leg, it cannot be accumulated for use on a following leg.[12]

The Volvo Open 70 has been replaced by the Volvo Ocean 65,[13] a new class of high performance one-design racing yacht created by Farr Yacht Design and built by a consortium of four European boatyards (Green Marine (UK), Decision (Switzerland), Multiplast (France) and Persico (Italy)).