For other uses, see Vigo (disambiguation).

Vigo (/ˈviːɡoʊ/, Galician: [ˈbiɣo], locally: [ˈbiħo, -xo], Spanish: [ˈbiɣo]) is a city and municipality in the province of Pontevedra, in Galicia, north-west Spain on the Atlantic Ocean. It is the capital of the comarca of Vigo and Vigo metropolitan area.

Vigo is the most populous municipality of Galicia, and the 14th in Spain, being the city non-capital of province more populated of Spain. The city has an area of 109,06 km² and had a population of 294,098 in 2015.

Vigo and its metropolitan area is one of the main economic agents of the region.

In the Middle Ages, the small village of Vigo was part of the territory of Galician speaking neighbouring towns, particularly Tui, and suffered several Viking attacks. However, the number of inhabitants was so small that, historically, Vigo was not considered to be a real village until around the 15th century, when the earliest records began.

In the 16th and 17th centuries, the city was attacked several times. In 1585 and 1589, Francis Drake raided the city and temporarily occupied it, leaving many buildings burnt. Several decades later a Turkish fleet tried to attack the city. As a result, the walls of the city were built in 1656 in the reign of Philip IV of Spain. They are still partially preserved. 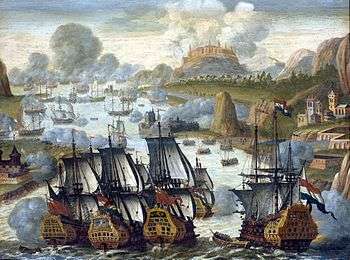 At this time, and in spite of the attacks, the city of Vigo developed its earliest commerce, and was given several privileges by the kings of Spain.

In 1702, the Battle of Vigo Bay occurred, and in 1719, because a Spanish fleet which departed from Vigo attempted to invade Scotland in support of the Jacobites, the city was occupied for ten days by a British force.

In 1808, the French Army annexed Spain to the Napoleonic Empire, although Vigo remained unconquered until January, 1809. Vigo was also the first city of Galicia to be freed from French rule in what is now celebrated as the Reconquista (reconquest from the French in the context of the Peninsular War) on 28 March each year. In 1833 the city of Pontevedra was designated the provincial capital.

The city grew very rapidly in the 19th and 20th centuries. This resulted in continuous urban planning changes, making Vigo less structured than other Galician cities as Pontevedra or A Coruña.

The city of Vigo, seen from the other side of the bay.

The urban area of Vigo is built over both a hill-fort (Castro) and a Roman settlement. It is generally accepted that the name Vigo is derived from the Latin word vicus spacorum, meaning small village.

The standard pronunciation of Vigo in both Galician and Spanish is [ˈbiɣo].

The nickname (cidade olívica) was used because it is said that, after the conflict between the Isabel de Castilla and Juana la Beltraneja where Galician nobility took part for the latter, the winner ordered to cut all the olive trees in Galicia because they symbolized the peace, but she couldn't unroot the one in Vigo because it was planted in sacred ground. The plant was then in the city seal and one descendant of that olive tree is still alive in Vigo city centre. 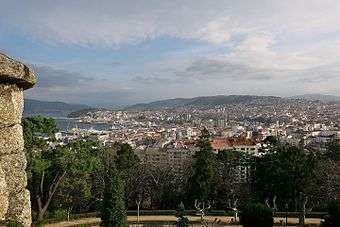 By language, according to 2008 data, 7% of the population speak always in Galician, 43% speak always in Spanish and the rest use both interchangeably. This makes Vigo the least Galician-speaking city in Galicia.

Demographic development of Vigo from 1842 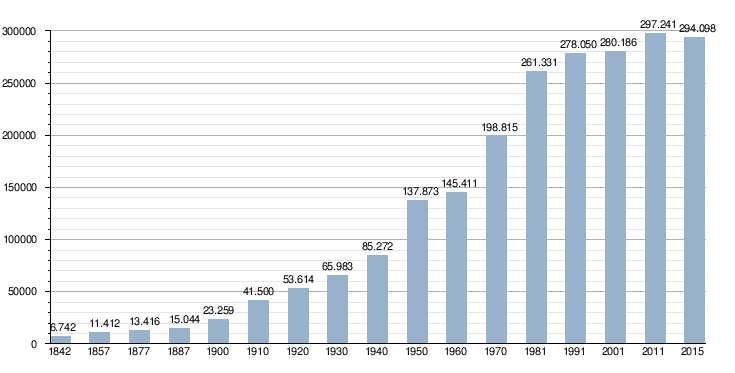 Vigo's climate is usually classified as oceanic (Köppen climate classification Cfb); however, the summers tend to be warmer (and drier) and the winters milder than most areas of similar classification. In actuality, with its noticeable drying trend in the summer, Vigo's climate is more similar to the variant of the oceanic climate commonly seen in the Pacific Northwest region of North America; though with noticeably warmer winters. Substantial rainfall throughout the year prevents it from being classified as a Mediterranean climate, even though there is a drying trend in summer. The average annual temperature in Vigo is 14 °C (57 °F). Compared to many other Galician towns, Vigo experiences warmer summer temperatures than A Coruña and milder winters than inland areas. This is due to its sheltered location, surrounded by mountains inland and the Illas Cíes out in the bay towards the sea.[2] The all-time record high for the city is 39.7 °C (103 °F) set on July 5, 2013.[3] Vigo is known for its extreme rainfall in winter. In December 1978 925.6 millimetres (36.44 in) fell at the weather station in a single month.[4] During that month on 7 December, 175 millimetres (6.9 in) fell on a single day.[5] Normal values for 1981-2010 was 1,791 millimetres (70.5 in) falling on just 129.2 days indicating heavy rain to be common.[6] The airport where values are taken are at a higher elevation than the city centre, which likely is warmer year-round.

Vigo is administratively divided into 23 districts (parroquias), which are further subdivided into wards (barrios) 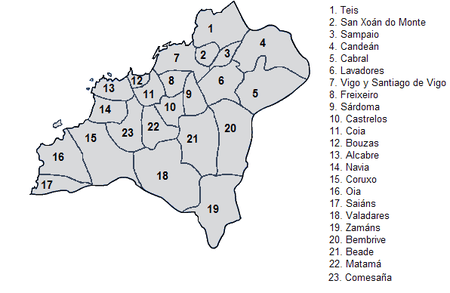 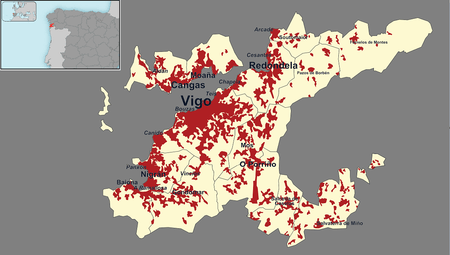 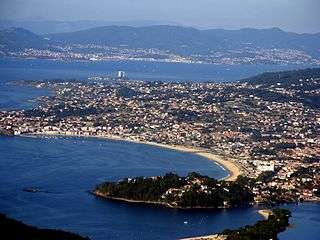 Extension of the population towards Nigrán

The following towns are in the Vigo metropolitan area: 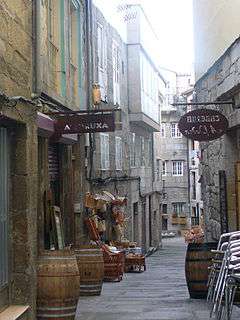 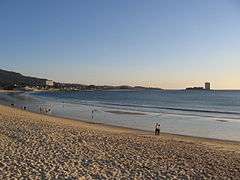 The municipality of Vigo is not only one of the major industrial cities in Galicia, but it is also one of the more important Roman centers of Pontevedra. Although within the city one will not find much Romanesque architecture, it can be seen a few kilometers away from the city center. In many of the municipality's neighborhoods and parishes a large number of Roman ruins remain. Such is the importance of the Roman remains in Vigo that many Spanish authors have come to coin the term Romanesque Vigo (románico vigués in Spanish). Vigo retains some interesting examples of Romanesque churches in southern Galicia:[8] 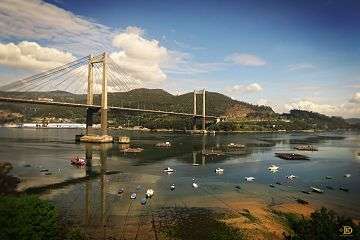 A ferry service operates between the Port of Vigo and the towns of Cangas and Moaña as well as the Cíes Islands, 15 kilometres away from the city, part of the Atlantic Islands of Galicia National Park, the only National Park in Galicia. European route E01 goes through the town. This highway goes south through Lisbon and north to the A Coruña area.

The railway allows direct connections to Porto across the border in Portugal, and an AVE train station is being built in the centre of the city to connect the city to Spain's high-speed rail network.

Urban transport is provided by buses by Vitrasa progestin. 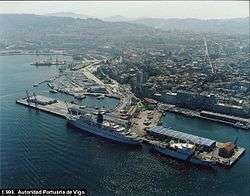 View of the port

Vigo is characterized by a diversified economy linked to the fishing sector, industry, trade, tourism and services. It is often considered the economic and industrial engine of Galicia. Significantly, Vigo was the municipality with the highest GDP in Galicia in 2013.

Vigo is the leading industrial area in Galicia, with car factories, shipyards, and auxiliary industry in both automotive and marine sectors. Situated in Vigo is Galicia's leading employer, French factory PSA Peugeot Citroën since 1958, which in 2007 produced a total of 545,000 vehicles, of which more than 82% were sold outside Spain.

In addition, Vigo has the largest fishing port in Europe and is the home port of the world's largest fishing company, Pescanova and the most important centre of the Galician canned fish industry. The headquarters of the European Fisheries Control Agency are also located in the city.

The publishing industry in Galician is very prominent in the city, with Editorial Galaxia and Editorial Xerais among others.

The Port of Vigo covers a length of more than 20 km and offers more than 9 km of docks. The largest port traffic is general freight, highlighting container traffic, RO-RO of vehicles (the second in Spain in Ro-Ro traffic for new vehicles), natural stone and granite (the first of Spain in granite traffic), wood and preserved food.

The University of Vigo is situated in a mountainous area on the outskirts of the city. It is an important center for studies related to ocean-based industries. The university has other campuses in Pontevedra and Ourense. The campus of Vigo is a modern project of the architect Enric Miralles, 15 kilometers away from the city.

The School of Mining Engineering is a school established in 1992. Its current director is Benito Vázquez Dorrío. it has undergone recent renovations in 2005 for more facilities.

Ocastro British School is situated in Mos on the outskirts of Vigo.

"A movida viguesa" was a hedonistic cultural movement that took place in Vigo during the 1980s triggered by the explosion of liberties after the death of dictator Francisco Franco. The most important artists of this postmodern movement were musicians; particularly punk and new wave bands such as Siniestro Total, Golpes Bajos, Aerolíneas Federales, Semen Up or Os Resentidos.

At the moment, the city still has notorious bands like Iván Ferreiro (ex-singer of Los Piratas) and Mon.

The locally produced award-winning feature movie Mondays In The Sun (original title Los lunes al sol) depicts the life of several men who have lost their work at the Port of Vigo. This film is not based on a single individual's experiences but on the perceived collective experiences of many local port workers.

Vigo has two daily newspapers; the Faro de Vigo, the oldest newspaper in Spain still in circulation, and the Atlántico Diario, a little local newspaper. 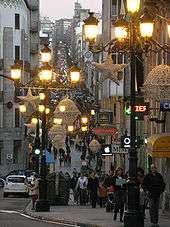 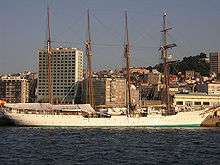 Vigo has one of the most important women's basketball team, Celta, more commonly referred to today by its sponsorship name of Celta Indepo. They usually compete in the top category of women's championship. They won the championship three times. For the season 2012-2013, and after several economic problems, the team will play in the Spanish women basketball second division.

Vigo has a football team, Real Club Celta de Vigo, which (as of 2016–17) plays in La Liga. The women's team from the area, Federación Viguesa de Peñas Recreativas El Olivo, was the first team from Galicia to compete in the Women's Primera División.[10]

The RCNV organizes important events like the Atlantic Week, that in September 2006 received the World Championship of the Platu 25 class. The RCNV also organizes every year in August one of the races with more sailboats of the Iberian peninsula: the Regata Rías Baixas, that in the 2006 edition included the participation of 130 sailboats of different nationalities.

The LMB is a yacht club that agglutinates around 400 associates. The LMB has a long and intense activity in sailing and recreational fishing. The LMB organizes two important regattas of the Galician calendar of sail: the Regata Vila de Bouzas and a Regata de Solitarios y a Dos.

The Regata Vila de Bouzas honors the neighborhood where is located the LMB. The Regata de Solitarios y a Dos is sponsored by the firm Aister and is for crews of one and two members. It is a difficult race with two steps. One step consists of a race through the coastal inside the bay of Vigo and the other step is longer race around the Cies Islands (and/or Ons Islands). Likewise, the LMB has schools of sailing and fishing. Yearly it organizes a cephalopods fishing competition.

Vigo Bay is one of the settings for Jules Verne's novel Twenty Thousand Leagues Under the Sea. The book's protagonist, Captain Nemo, draws his wealth and the funding for his submarine Nautilus from the cargoes of the galleons sunk by the British during the Battle of Vigo Bay in 1702, which are depicted as never having offloaded their treasure and as being easily accessible to divers.[11]

Vigo is twinned with: