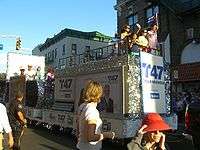 WNJU-TV signed on the air on May 16, 1965 as the first commercial UHF station in the New York City/New Jersey television market. The station originally broadcast from the Mosque Theater (now Symphony Hall), located at 1020 Broad Street in Newark, in the former studios of WATV (channel 13; later WNTA, now WNET). The station was owned by Henry Becton (son of Maxwell Becton, co-founder of Becton Dickinson) and Fairleigh S. Dickinson Jr. (son of Fairleigh S. Dickinson Sr. the founder of Fairleigh Dickinson University and also the co-founder of Becton Dickinson. The general manager during WNJU's early years was pioneering UHF broadcaster Edwin Cooperstein. The station's initial schedule featured a mix of English, Asian, Spanish and Italian shows. During the mid-1960s, the station broadcast a live and locally produced teenage dance show called Disc-O-Teen, hosted by John Zacherle; and a folk music program, Rainbow Quest, hosted by Pete Seeger. WNJU was involved in some controversy when it aired bullfights, which some critics believed were too violent. The station was not profitable due to the lack of awareness of UHF stations in the New York metropolitan area. The market had seven VHF stations, six of which were commercial, at a time when most cities had an average of three commercial stations. WNJU already had two strikes against it, and served minority audiences with mostly brokered programming.

WNJU was sold in the fall of 1970 for $8 million (a fairly high price for a UHF station back in 1970) to Screen Gems Broadcasting, a subsidiary of Columbia Pictures. It was thought that WNJU would now become competitive because Screen Gems had deep pockets, but the brokered ethnic format would ultimately continue. It maintained an English-speaking audience a few hours a week during the 1970s when it was the only New York broadcast outlet for the World Wide Wrestling Federation. The station used a logo with WAPA-TV's "Open 4", as it was WAPA-TV's sister station at the time.

In 1984, WNJU joined with two Spanish language television stations that were not affiliated with the Spanish International Network (now Univision) and formed NetSpan, the United States' second Spanish-language television network. NetSpan's original group of affiliates included WNJU, KSTS in San Jose, California, and WBBS in Chicago, Illinois (which aired its programming in the evenings and late nights only); the latter two stations were locally owned. In 1985, KVEA in Corona, California, WSCV in Fort Lauderdale, Florida (both of which were owned by Blair Broadcasting), and locally owned WCIU-TV in Chicago (which aired NetSpan programming after 5 p.m. only) joined NetSpan. The network acquired WNJU and the other stations, except for WCIU, outright in 1986.

The former logo of WNJU as Telemundo 47.

In 1987, NetSpan added more affiliates, and changed its name to Telemundo. In Chicago, WSNS-TV dropped its Univision affiliation and joined Telemundo, with WCIU carrying Univision programming after 5 p.m. In the early 1990s, WNJU dropped its English-language religious shows and became a full-time Telemundo station.

In 1989, the station moved its operations to 39 Industrial Avenue in Teterboro. In 2001, General Electric (then-owner of NBC) purchased Telemundo. WNJU witnessed major overhauls, adopting similar opening graphics to those used at New York City's WNBC, and adopting a tweaked version of its opening music sequence. In 2003, WNJU relocated to the Sixth Floor at 2200 Fletcher Avenue in Fort Lee, occupying the former studios and offices of the NBC-owned CNBC cable network, which around the same time moved to a state-of-the-art new studio complex at 900 Sylvan Avenue (Route 9W) in Englewood Cliffs.

In 2009, WNJU debuted the morning magazine program Las Comadres con Gloria B, which became the #1 program in the market in its timeslot, garnering 1.5 million viewers.[1][2][3]

The station's digital channel is multiplexed:

WNJU discontinued regular programming on its analog signal, over UHF channel 47, on June 12, 2009, as part of the federally mandated transition from analog to digital television.[7] The station's digital signal remained on its pre-transition UHF channel 36,[8] using PSIP to display WNJU's virtual channel as 47 on digital television receivers.

WNJU presently broadcasts 17 hours of locally produced newscasts each week (with three hours on weekdays and one hour each on Saturdays and Sundays); in addition, the station produces a newsmagazine program titled Acceso Total, which airs weekday mornings at 10 a.m. and the public affairs program Enfoque New York (a local version of the Telemundo discussion program Enfoque), which airs Sundays at 12 p.m.

WNJU launched its news operation in the late 1980s, with 6 p.m. and 11 p.m. newscasts anchored by Jorge L. Ramos In 1997, it launched a weekend edition of Noticiero 47, anchored by Ivan Taylor. In 2001, it launched a morning newscast called Noticiero 47 Primera Edicion, as well as a midday newscast, and the weekend newscast was taken over by Ramon Zayas. However, due to cutbacks, WNJU pulled the plug on its morning, midday, and weekend newscasts in 2009.

Three years later, in 2012, the weekend newscast was relaunched, and in November 2012, a new morning newscast was introduced, called Buenos días, Nueva York. Buenos Días expanded to 5 a.m., adding El Pacha from rival WXTV-DT, though it later reverted to its former title of Noticiero 47 Primera Edicion. Gloria Echeverry was also added to the weeknight newscasts as co-anchor, while Yaima Crespo joined the weekend newscasts in that same capacity. Entertainment reporter Odalys Molina was moved to the morning newscast. During that time, the station also received a new helicopter, HelicopteroT47, along with sister station WNBC and rival WXTV-DT. Morning weather anchor Victoria Sosa and Rafael Bello now anchor Acceso Total.