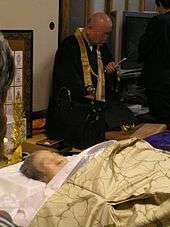 A wake is a social gathering associated with death, usually held before a funeral. Traditionally, a wake takes place in the house of the deceased with the body present; however, modern wakes are often performed at a funeral home or another convenient location. In the United States and Canada it is synonymous with a viewing. It is often a social rite which highlights the idea that the loss is one of a social group and affects that group as a whole.[1]

The term originally referred to a late-night prayer vigil but is now mostly used for the social interactions accompanying a funeral. While the modern usage of the verb wake is "become or stay alert", a wake for the dead harks back to the vigil, "watch" or "guard" of earlier times. It is a misconception that people at a wake are waiting in case the deceased should "wake up".[2]

The term wake originated from Middle English wakien, waken, from Old English wacan, to wake up and wacian, to be awake, keep watch.[3] and was originally used to denote a prayer vigil, often an annual event held on the feast day of the saint to whom a parish church was dedicated.[4] Over time the association with prayer has become less important, although not lost completely,[5] and in many countries a wake is now mostly associated with the social interactions accompanying a funeral.[2]

It used to be the custom in most Celtic countries in Europe for mourners to keep watch or vigil over their dead until they were buried — this was called a "wake".

With the change to the more recent practice of holding the wake at a funeral home rather than the home, the custom of providing refreshment to the mourners is often held directly after the funeral at the house or another convenient location.