Valagamba(sinhala:වළගම්බා), also known as Vattagamani Abhaya[1] and Valagambahu, was a king of the Anuradhapura Kingdom of Sri Lanka. Five months after becoming king, he was overthrown by a rebellion and an invasion from South India, but regained the throne by defeating the invaders after fourteen years. He is also known for the construction of the Abhayagiri Dagaba.

Accession to the throne

Valagamba was the fourth son of King Saddha Tissa, the brother of Dutthagamani. His three elder brothers Thulatthana, Lanja Tissa and Khallata Naga ruled the country before him.[2] A General of the army named Kammaharattaka (Maharattaka) killed Khallatanaga, the last of them and seized power. Valagamba in turn killed Kammaharattaka and took the throne himself in 103 BCE.[3]

He kept Mahaculika, the son of Khallatanaga, as his own son, and took Anuladevi, Mahaculika's mother, as his queen. He also had another queen named Somadevi.[2]

Five months after his coronation as king, a Brahmin in Rohana named Tissa rebelled against him. At the same time, an invading army from South India led by seven Tamil leaders landed in Mahatittha. Tissa and the seven Tamil leaders all sent messages to Valagamba, telling him to hand over power to them.[3] Valagamba informed the Brahmin Tissa that the kingdom will be his and told him to defeat the invading army. Accepting this, Tissa tried to fight but was defeated by the Tamils.[2]

After this, the seven Tamil leaders waged war against Valagamba, and defeated him after a battle at Kolambalaka. While the king was fleeing in a chariot, a nirgrantha (Jain named Giri shouted that the king was fleeing. Valagamba resolved to build a temple there, and later built the Abhayagiriya after he regained the throne.[2] When the pursuers were gaining on them, Queen Somadevi got down from the chariot to lighten it and give the king a chance to escape, and was captured.[3] The Pathra Dathu (sacred Bowl relic) was also taken to India. The five Dravidians namely Pulahatta, Bahiya, Panya Mara, Pilaya Mara and Dathika ruled Anuradhapura for 14 years by assassinating each other one by one.

Valagamba fled to Malayarata for safety and a monk named Kuppikkala Mahatissa helped him while he was in hiding. The king organized a large army in order to attack Anuradhapura and defeat the invading army. However, a rift between him and his ministers resulted in them leaving him and thus weakening the army.[3] However, the sangha brought about a reconciliation and Valagamba resumed his preparations for attacking Anuradhapura.[2]

In c.89 BCE, Valagamba regained the throne after defeating Dathika, the last of the invading Tamil leaders, and ruled the country for twelve years until his death in 77 BCE.[4] He sent for Somadevi and restored her as queen, and built a temple named Somarama in her honour.[2] 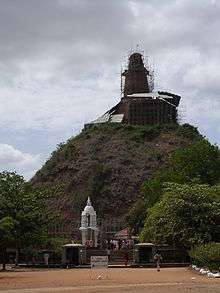 The Abhayagiri Stupa, built by Valagamba.

The king built Abhayagiri Dagaba and stupa, which has a height of about 70 metres (230 ft).[5] The Abhayagiri temple became one of the three main Buddhist institutions in the country. He converted the caves he was hiding in to a temple.[6] This temple is known as the Dambulla Rock Temple.[4] king Valagamba also built several other temples. The Tripitaka, which was handed down orally in the Bhikkhu order until then, was recorded on palm leaves in the Aluvihara Temple, Matale during the Fourth Buddhist Council.[7]

The Abayagiri Stupa was offered to Kuppikala Mahatissa Thero by the king to show his gratitude. This was the first time a temple was offered privately to a monk and it caused the first conflict between the Sangha when 500 Bhikkus decided to leave Mahavihara and join Abayagiriya where they created another sect. This is the first schism in Buddhism in Sri Lanka.

There is a major discrepancy between the sources which cite the death of Valagamba of Anuradhapura in 77 BCE and his patronization of the effort to commit the Buddhist oral traditions to writing in the period 29 to 17 BCE as cited by Norman.[8]

The Dipavamsa states that during the reign of Vattagamani Abhaya (29–17 BCE) the monks who had previously remembered the Tipitaka and its commentary orally now wrote them down in books, because of the threat posed by famine, war, and the growing power of the newly established Abhayagiri vihdra, which enjoyed the king's favour. The Mahavamsa also refers briefly to the writing down of the canon and the commentaries at this time

This chronology placing Vattagamani's second reign in 29–17BCE was originally devised in 1912 by Wilhelm Geiger, PhD in the preface to his translation of the Mahavamsa, as displayed in the chart on page xxxvii.[9] This 1912 chronology does not agree with the date assignments found at: List of Sinhalese monarchs.