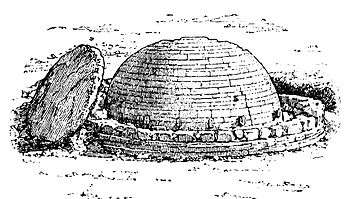 An early stupa, 6 meters in diameter, with fallen umbrella on side. Chakpat, near Chakdara. Probably Maurya empire, 3rd century BCE. 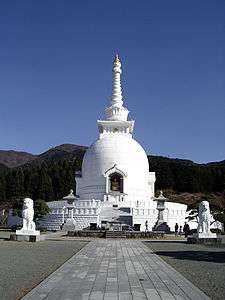 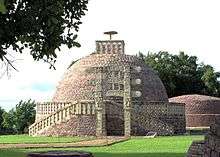 A stupa (Sanskrit: m.,स्तूप "heap") is a mound-like or hemispherical structure containing relics (śarīra - typically the remains of Buddhist monks or nuns) that is used as a place of meditation.[2] 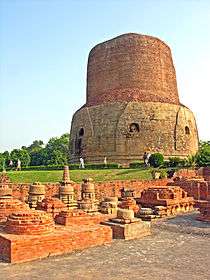 Dhamek Stupa in Sarnath marks the spot where Buddha gave his first sermon.

Stupas originated as pre-Buddhist tumuli in which śramaṇas were buried in a seated position[3] called chaitya.[4] After the parinirvana of the Buddha, his remains were cremated and the ashes divided and buried under eight mounds with two further mounds encasing the urn and the embers. The earliest archaeological evidence for the presence of Buddhist stupas dates to the late 4th century BCE in India. Buddhist scriptures claim that stupas were built at least a century earlier. Since it is likely that before this time, stupas were built with non-durable materials such as wood, or even as just burial mounds, little is known about these early stupas, particularly since it has not been possible to identify the original ten monuments. However, some later stupas, such as at Sarnath and Sanchi, seem to be embellishments of earlier mounds. The earliest evidence of monastic stupas dates back to the 2nd century BCE. These are stupas that were built within Buddhist monastic complexes. These stupas replicated older stupas made of baked bricks and timber in stone. Sanchi, Sarnath, Amaravati and Bharhut are examples of stupas that were shaped in stone imitating previously existing wooden parts.

The stupa was elaborated as Buddhism spread to other Asian countries becoming, for example, the chörten of Tibet[5] and the pagoda in East Asia.[6] The pagoda has varied forms that also include bell-shaped and pyramidal styles. In the Western context, there is no clear distinction between the stupa and the pagoda. In general, however, "stupa" is used for a Buddhist structure of India or Southeast Asia while "pagoda" refers to a building in East Asia which can be entered and which may be secular in purpose.

Stupas were built in Sri Lanka soon after Devanampiya Tissa of Anuradhapura converted to Buddhism. The first stupa to be built was the Thuparamaya. Later on, many more were built over the years, some like the Jetavanaramaya in Anuradhapura being one of the tallest ancient structures in the world.

The earliest archaeological evidence for the presence of Buddhist stupas dates to the late 4th century BCE in India, Sanchi, Sarnath, Amaravati and Bharhut are one of the oldest known stupas. The tallest is the Phra Pathommachedi in Nakhon Pathom Province, Thailand, at a height of 127 metres[7] The Swat Valley hosts one of the well-preserved stupa at Shingardar near Ghalegay and another stupa is located near Barikot and Dharmarajika-Taxila in Pakistan. In Sri Lanka, the ancient city of Anuradhapura includes some of the tallest, most ancient and best preserved stupas in the world, such as Ruwanwelisaya.

The most elaborate stupa is the 8th century Borobudur monument in Java, Indonesia. The upper rounded terrace with rows of bell-shaped stupas contained buddha images symbolizing Arūpajhāna, the sphere of formlessness. The main stupa itself is empty, symbolizing complete perfection of enlightenment. The main stupa is only the crown part of the monument, while the base is pyramidal structure elaborate with galleries adorned with bas relief of scenes derived from Buddhist text depicted the life of Gautama Buddha. Borobudur's unique and significant architecture has been acknowledge by UNESCO as the largest buddhist monument in the world. It is the world’s largest Buddhist temple,[8][9] as well as one of the greatest Buddhist monuments in the world.[10] 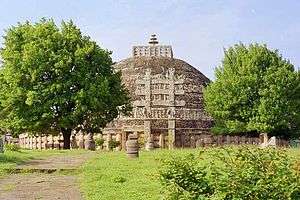 The Sanchi Stupa, which contained the relics of Buddha is the oldest known stupa.

Built for a variety of reasons, Buddhist stupas are classified based on form and function into five types:[11] 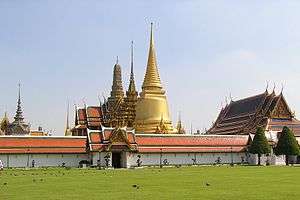 View of Wat Phra Kaew Complex from Northeast, Temple Complex of the Emerald Buddha with stupas.

"The shape of the stupa represents the Buddha, crowned and sitting in meditation posture on a lion throne. His crown is the top of the spire; his head is the square at the spire's base; his body is the vase shape; his legs are the four steps of the lower terrace; and the base is his throne."[12]

Although not described in any Tibetan text on stupa symbolism, the stupa may represent the five purified elements:[13]

To build a stupa, transmissions and ceremonies from a Buddhist teacher is necessary.[14] Which kind of Stupa to be constructed in a certain area is decided together with the teacher assisting in the construction. Sometimes the type of stupa chosen is directly connected with events that have taken place in the area.[14]

The sharing of the relics of the Buddha, Zenyōmitsu-Temple Museum, Tokyo

All stupas contain a treasury filled with various objects. Small clay votive offerings called tsatsas in Tibetan fill a major part of the treasury. Creation of various types of tsatsas is a ceremony itself. Mantras written on paper are rolled into thin rolls, and put into these small clay stupas.[14] Filling the treasury, one layer of Tsa-Tsas are placed, and the empty space between is filled with dry sand. On the new surface appearing, another layer is made, until the entire space of a treasury is full.[14]

The number of tsatsas are dependent on the size of both the treasury and tsatsa, since it should be completely filled. For example, the Kalachakra stupa in southern Spain has approximately 14,000 tsatsas within.[14]

Jewellery and other "precious" objects are also placed in the treasury. It is not necessary that the jewelry be expensive, since it is the symbolic value that is important, not the market price.[14] It is believed that the more objects placed into the stupa, the stronger the energy of the Stupa will be.[14]

Building a stupa is considered extremely beneficial, leaving very positive karmic imprints in the mind. Future benefits from this action will result in fortunate rebirths. Fortunate worldly benefits will be the result, such as being born into a rich family, having a beautiful body, a nice voice, and being attractive and bringing joy to others and having a long and happy life, in which one's wishes are fulfilled quickly.[15] On the absolute level, one will also be able to reach enlightenment, the goal of Buddhism, quickly.[15]

Destroying a stupa on the other hand, is considered an extremely negative deed, similar to killing.[16] Such an action is explained to create massive negative karmic imprints, leading to massive future problems. It is said this action will leave the mind in a state of paranoia after death has occurred, leading to totally unfortunate rebirths.[16] 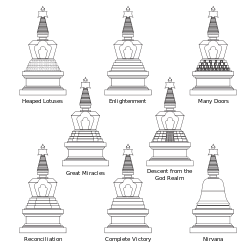 There are eight different kinds of stupas in Tibetan Buddhism, each referring to major events in the Buddha's life.[13]

Also known as "Stupa of Heaped Lotuses" or "Birth of the Sugata Stupa," this stupa refers to the birth of Gautama Buddha. "At birth Buddha took seven steps in each of the four directions"[13] (East, South, West and North). In each direction lotuses sprang, symbolizing the brahmavihāras: love, compassion, joy and equanimity. The four steps of the basis of this stupa is circular, and it is decorated with lotus-petal designs. Occasionally, seven heaped lotus steps are constructed. These refer to the seven first steps of the Buddha.[13] 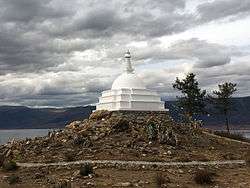 Also known as the Stupa of the Conquest of Mara. This stupa symbolizes the 35-year-old Buddha's attainment of enlightenment under the bodhi tree in Bodh Gaya, where he conquered worldly temptations and attacks manifesting in the form of Mara.[13]

Stupa of Many Doors

Also known as the Stupa of Many Gates. After reaching enlightenment, the Buddha taught his first students in a deer-park near Sarnath. The series of doors on each side of the steps represent the first teachings: the Four Noble Truths, the Six Pāramitās, the Noble Eightfold Path and the Twelve Nidānas.[13]

Stupa of Descent from the God Realm

At 42 years of age, Buddha spent a summer retreat in the Tuṣita Heaven where his mother had taken rebirth. In order to repay her kindness he taught the dharma to her reincarnation. Local inhabitants built a stupa like this in Sankassa in order to commemorate this event. This stupa is characterized by having a central projection at each side containing a triple ladder or steps.[13] 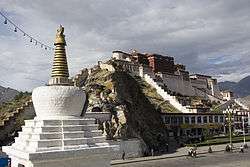 Also known as Stupa of Conquest of the Tirthikas. This stupa refers to various miracles performed by the Buddha when he was 50 years old. Legend claims that he overpowered maras and heretics by engaging them in intellectual arguments and also by performing miracles. This stupa was raised by the Lichavi kingdom to commemorate the event.[13]

This stupa commemorates the Buddha's resolution of a dispute among the sangha. A stupa in this design was built in the kingdom of Magadha, where the reconciliation occurred. It has four octagonal steps with equal sides.[13]

This stupa commemorates Buddha's successful prolonging of his life by three months. It has only three steps, which are circular and unadorned.[13]

This stupa refers to the death of the Buddha, when he was 80 years old. It symbolizes the Buddha's complete absorption into the highest state of mind. It is bell-shaped and usually not ornamented.[13]

A ninth kind of stupa exists, the Kalachakra stupa. Its symbolism is not connected to events in the Buddha's life, but instead to the symbolism of the Kalachakra Tantra, created to protect against negative energies.[17]

Swat District is a small place with large number of ancient Stupas. The largest stupa of the Indian subcontinent is based in Shingardar.