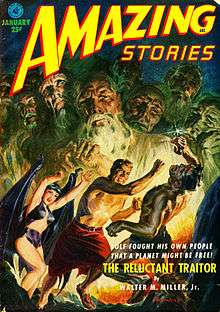 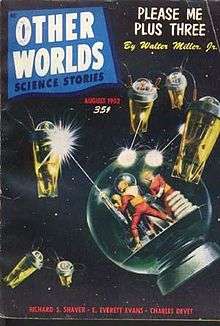 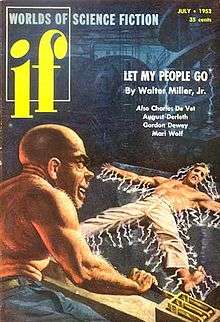 Walter Michael Miller Jr. (January 23, 1923 – January 9, 1996) was an American science fiction writer. He is known primarily for A Canticle for Leibowitz (1959), the only novel he published in his lifetime. Prior to its publication he was a prolific writer of short stories.

Miller was born in New Smyrna Beach, Florida. Educated at the University of Tennessee and the University of Texas, he worked as an engineer. During World War II, he served in the Army Air Corps as a radioman and tail gunner, flying more than fifty bombing missions over Italy. He took part in the bombing of the Benedictine Abbey at Monte Cassino, which proved a traumatic experience for him. Joe Haldeman reported that Miller "had Post Traumatic Stress Disorder for 30 years before it had a name", and that Miller displayed a photograph he had taken of Ron Kovic prominently in his living room.[1]

After the war, Miller converted to Catholicism. He married Anna Louise Becker in 1945 and they had four children. He lived with science-fiction writer Judith Merril in 1953.

Between 1951 and 1957, Miller published over three dozen science fiction short stories, winning a Hugo Award in 1955 for the story "The Darfsteller". He also wrote scripts for the television show Captain Video in 1953.[2] Late in the 1950s, Miller assembled a novel from three closely related novellas he had published in The Magazine of Fantasy and Science Fiction in 1955, 1956 and 1957. The novel, entitled A Canticle for Leibowitz, was published in 1959.

A Canticle for Leibowitz is a post-apocalyptic novel revolving around the canonisation of Saint Leibowitz and is considered a masterpiece of the genre. It won the 1961 Hugo Award for Best Novel. The novel is also a powerful meditation on the cycles of world history and Roman Catholicism as a force of stability during history's dark times.

After the success of A Canticle For Leibowitz, Miller never published another new novel or story in his lifetime, although several compilations of Miller's earlier stories were issued in the 1960s and 1970s. A radio adaptation of A Canticle for Leibowitz was produced by WHA Radio and NPR in 1981 and is available on CD. A radio adaptation of the first two parts was broadcast in the UK by the BBC in 1992. Further details can be found on the BBC Genome Project. [3]

In Miller's later years, he became a recluse, avoiding contact with nearly everyone, including family members; he never allowed his literary agent, Don Congdon, to meet him. According to science fiction writer Terry Bisson, Miller struggled with depression, but had managed to nearly complete a 600-page manuscript for the sequel to Canticle before taking his own life with a firearm in January 1996, shortly after his wife's death.[1][4] The sequel, Saint Leibowitz and the Wild Horse Woman, was completed by Bisson and published in 1997.[5]