The Walter Payton Award is awarded annually to the most outstanding offensive player in the Division I Football Championship Subdivision (formerly Division I-AA) of college football as chosen by a nationwide panel of media and college sports information directors.[1] The honor was first given in 1987 to the outstanding player in the division, but in 1995, eligibility was restricted to offensive players, as the Buck Buchanan Award for defensive players was inaugurated.

The bust was named in honor of the late National Football League (NFL) legend Walter Payton, who starred at Jackson State University.[2]

Among the many schools in the division, only six schools have won it twice: Appalachian State, Colgate, Georgia Southern, Idaho, New Hampshire, and Eastern Illinois. Eastern Washington and Villanova are the only schools to have won it three times. In 2009, Armanti Edwards from Appalachian State became the first player to receive the award twice.[3] 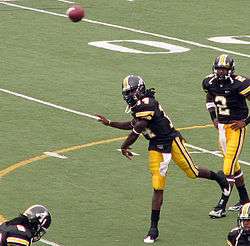 Armanti Edwards is the only two-time winner of the award

†No longer a member of FCS