For other uses, see Running back (disambiguation).

The running back playing halfback in a typical I formation.

A running back (RB) is an American and Canadian football position, a member of the offensive backfield. The primary roles of a running back are to receive handoffs from the quarterback for a rushing play, to catch passes from out of the backfield, and to block.[1] There are usually one or two running backs on the field for a given play, depending on the offensive formation. A running back may be a halfback (in certain contexts also referred to as a tailback) or a fullback. A running back will sometimes be called a "feature back" if he is the team's starting running back.

A running back turns up the field in an attempt to reach the end zone.

The halfback (HB) or tailback (TB) position is responsible for carrying the ball on the majority of running plays, and may frequently be used as a receiver on short passing plays.

In the modern game, an effective halfback must have a blend of both quickness and agility as a runner, as well as sure hands and good vision up-field as a receiver. Quarterbacks depend on halfbacks as a safety valve receiver when primary targets downfield are covered or when they are under pressure. Occasionally, halfbacks line up as additional wide receivers.

When not serving either of these functions, the primary responsibility of a halfback is to aid the offensive linemen in blocking, either to protect the quarterback or another player carrying the football. As a trick play, running backs are occasionally used to pass the ball on a halfback option play or halfback pass.

In Canadian football, the term tailback is often used interchangeably with running back, while the use of the term halfback is often exclusively reserved for the defensive halfback, which refers to the defensive back halfway between the linebackers and the cornerbacks. 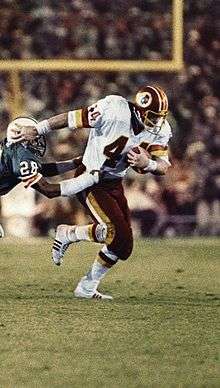 In most modern college and professional football schemes, fullbacks (FB) carry the ball infrequently, instead using their stronger physiques as primary "lead blockers." On most running plays, the fullback leads the halfback, attempting to block potential tacklers before they reach the ball carrier.

When fullbacks are called upon to carry the ball, the situation typically calls for gaining a short amount of yardage, as the fullback can use his bulkiness to avoid being tackled early. Fullbacks are sometimes receivers for passing plays, although most plays call for the fullback to block any defensive players that make it past the offensive line, a skill referred to as "blitz pickup". Fullbacks are technically running backs, but today the term "running back" is usually used in referring to the halfback or tailback. Although modern fullbacks are rarely used as ball carriers, in previous offensive schemes fullbacks would be the designated ball carriers.

In high school football, where player sizes vary greatly, fullbacks are still frequently used as ball carriers. In high school and college offenses, the triple option scheme uses the fullback as a primary ball carrier. The fullback plays a unique role by establishing an inside running threat on every play. College teams such as Georgia Tech and Air Force have employed the triple option scheme.

While in years past the fullback lined up on the field for almost every offensive play, teams often opt to replace the fullback with an additional wide receiver or a tight end in modern football. Fullbacks in the National Football League rarely carry or catch the ball since they are used almost exclusively as blockers. Fullbacks are also still used occasionally as rushers on plays when a short gain is needed for a first-down or touchdown. Pro Football Hall of Fame members Jim Brown, Marion Motley, Franco Harris, John Riggins, and Larry Csonka were fullbacks.

Characteristics of a running back

Darren Sproles, a "scat back"

There is a diversity in those who play at the running back position. At one extreme are smaller (5'4"–5'10"), shiftier players. These quick, agile, and elusive running backs are often called "scat backs" because their low center of gravity and maneuverability allow them to dodge tacklers. Running backs known for their elusiveness include Red Grange, Hugh McElhenny, Gale Sayers, and Barry Sanders.[2]

At the other extreme are "power backs:" bigger, stronger players who can break through tackles using brute strength and raw power. They are usually slower runners compared to other backs, and typically run straight ahead (or "North-and-South" in football terminology) rather than dodging to the outside edges of the playing field. Hall of Famers Earl Campbell, Bronko Nagurski, John Riggins, and Larry Csonka were considered power running backs.[3]

Over the years, NFL running backs have been used as receivers out of the backfield. On passing plays, a running back will often run a "safe route," such as a hook or a flat route, that gives a quarterback a target when all other receivers are covered or when the quarterback feels pressured. Hall of Famer Lenny Moore was a halfback who played primarily as a pass receiver.[4]

Some teams have a specialist "third down back," who is skilled at catching passes or better at pass blocking and "picking up the blitz," and thus is often put in the game on third down and long. It can also be used to fool the defense by making them think it is being put into the game for a pass play, when the play is actually a run.

Many teams also have a running back designated as a "goal line back" or "short yardage specialist". This running back comes into the game in short yardage situations when the offense needs only a little bit of yardage to get a first down or a touchdown. They also come into the game when the offense nears the goal line. Normally when an offense gets inside the 5-yard line it sends in its goal line formation, which usually includes eight blockers, a quarterback, a running back, and a fullback. The closer it is to the goal line the more likely it is to use this formation. If a certain running back is used often near the goal line he may be called the "goal line back." Short yardage and goal line backs often are power backs who are not prone to fumbling. Their job is to get the first down or touchdown by muscling through or pushing a large mass of defenders to push their way to the designated area.

Running backs are sometimes called upon to return punts and kickoffs, a role usually filled by wide receivers and defensive backs, such as cornerbacks, who are generally the fastest players on the team. A running back, Brian Mitchell, currently holds the NFL records for career kickoff return yards (14,014 yards) and career punt return yards (4,999).