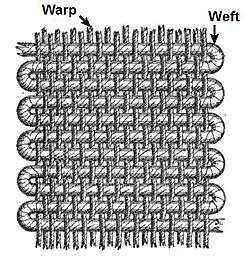 Warp and weft in plain weaving

In weaving, the weft (sometimes woof) is the term for the thread or yarn which is drawn through the warp yarns to create cloth. Warp is the lengthwise or longitudinal thread in a roll, while weft is the transverse thread. A single thread of the weft, crossing the warp, is called a pick. Terms do vary (for instance, in North America, the weft is sometimes referred to as the fill or the filling yarn).[1][2]

The weft is a thread or yarn usually made of spun fibre. The original fibres used were wool, flax or cotton. Today, man-made fibres are often used in weaving. Because the weft does not have to be stretched on a loom in the way that the warp is, it can generally be less strong.

The weft is threaded through the warp using a "shuttle", air jets or "rapier grippers." Hand looms were the original weaver's tool, with the shuttle being threaded through alternately raised warps by hand. Inventions during the 18th century spurred the Industrial Revolution, with the "picking stick"[3] and the "flying shuttle" (John Kay, 1733) speeding up production of cloth. The power loom patented by Edmund Cartwright in 1785 allowed sixty picks per minute.[3]

A useful way of remembering which is warp and which is weft is: 'one of them goes from weft to wight'.[4]

The words woof and weft derive ultimately from the Old English word wefan, to weave.

The expression "woof and warp" (also "warp and woof", "warp and weft") is sometimes used metaphorically as one might similarly use "fabric"; e.g., "the warp and woof of a student's life" means "the fabric of a student's life." The expression is used as a metaphor for the underlying structure on which something is built. Warp or woof are also words found in the Bible in the discussion of mildews found in cloth materials in Leviticus 13:48-59.

Weft is also a hairdressing term for temporary hair extensions. It can be attached to a person's hair in a couple of ways including cornrow braiding, using metal cylinders or gluing. The result is often called a weave.[5][6]