The 141st Field Artillery is an historic American military unit that is currently part of the Louisiana Army National Guard[2] headquartered in New Orleans, Louisiana.[3] It traces its lineage to a militia artillery battery back to 1838, and its heritage includes substantial combat service in several major wars. It earned the Presidential Unit Citation (US) for its service in World War II.

26 May 1861 the Unit was mustered into the American Civil War;[5] four companies served in the Army of Northern Virginia and a fifth was in the Army of Tennessee. Elements of the Washington Artillery participated in over sixty major actions. A few notable engagements include: Battle of Antietam, Battle of Gettysburg, Battle of Shiloh, Battle of Chickamauga, Battle of Fredericksburg, First Battle of Manassas, and the Battle of Cold Harbor.

After the Civil War, it was reorganized as an independent unit called the "Louisiana Volunteer Field Artillery" where it served the United States in the occupation of Cuba. It later was called into service to protect the Mexican border in 1916. A year later it received the designation 141st Artillery. In early 1941, the 141st Field Artillery was mobilized for World War II where it earned the Presidential Unit Citation; a duplicate unit was formed, the 935th Field Artillery Battalion, with both serving in Europe and North Africa. The anti-tank batteries of the battalion were separated in mid-1941, and formed the 773rd Tank Destroyer Battalion.

Between 1959 and 1967, several sister units were combined to form the 141st Field Artillery Battalion. In 2004 through 2005 and again in 2010, the 141st FA as part of the 256th Infantry Brigade mobilized to Baghdad, Iraq, in support of Operations Iraqi Freedom and New Dawn.

On 29 August 2005, Hurricane Katrina struck the gulf coast of Louisiana and Mississippi[6] while most members of the Washington Artillery were still serving their final weeks of deployment in Iraq. Following the return of the Battalion to Louisiana, a detachment immediately mobilized to New Orleans to aid law enforcement with rescue efforts. With the help of the Louisiana State Police, those efforts transitioned into a support mission for the New Orleans Police Department. Joint Task Force Gator was created to help combat the rise of looting and other crimes resulting from the loss of law enforcement officers in the New Orleans area. After three-and-a-half years of assisting local police and patrolling the city, the task force was released from duty on 28 February 2009.[7]

Regimental colors of the Washington Artillery 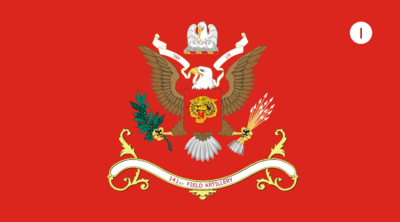 These are the Campaign streamers awarded to the Regiment:

The Washington Artillery on the Parade Field at Jackson Barracks