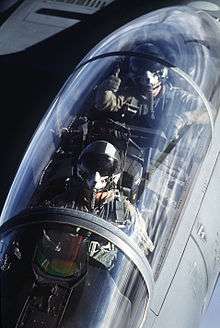 Historically, aircrew duties in military aircraft were highly specialised and rigid, because the relevant controls, instruments/displays, and/or weapons were concentrated in front of particular seats, panels or positions. That included two-seat variants of fighter or attack/strike aircraft (including late 20th century types such as the F-4 Phantom II, A-6 Intruder, F-111, Panavia Tornado, Sukhoi Su-17/20/22 and Su-30). However, more recently developed aircraft with two-member crews such as the F-14 Tomcat, F-15E Strike Eagle and F/A-18F Super Hornet often feature programmable multi-function displays, which allow roles to be more flexible than previous generation aircraft: multiple crew members can be responsible for detecting, targeting and engaging air-to-air or ground targets, communications, datalinks and/or defensive systems. Roles can be customized, based on experience, expertise, workload, tactics, and weapons being employed. Pilots usually retain the responsibility for flying the aircraft in tactical situations. However, bomber aircraft typically retain more rigidly defined and conventional roles.

In the British Royal Air Force, a WSO (formerly navigator) is a commissioned officer that operates aircraft mission systems on the Tornado GR4 amongst other platforms. Non-Commissioned aircrew can serve as a WSOp (Weapon Systems Operator), an umbrella term for the various specialist aircrew responsible for assisting the pilot in operating the mission systems of the aircraft (e.g. linguists, loadmasters, crewman).[1]

In the United States Navy, WSOs are Naval Flight Officers responsible for manning the weapon systems of the F/A-18F Super Hornet strike fighter from that jet's aft seat. Prior to the introduction of the F/A-18F, they were known as Radar Intercept Officers (RIO) in the aft seats of the now retired F-4 Phantom II and F-14 Tomcat, as Bombardier/Navigators (B/N) in the right seat of the now retired A-6 Intruder and the heavy attack version of the A-3 Skywarrior, and as B/Ns in the aft seat in the heavy attack version of the retired A-5 Vigilante and Reconnaissance Attack Navigators (RAN) in the aft seat of its follow-on, the retired RA-5C Vigilante.

In U.S. Naval Aviation (USN & USMC), when designated as the mission commander (MC), the WSO is responsible for all phases of the assigned mission, especially if there are multiple aircraft involved. For example, the aircraft pilot could be the junior member of a flight crew such as a USN Lieutenant, junior grade/USMC 1st Lieutenant or USN Lieutenant/USMC Captain and the Weapon Systems Officer could be a senior officer such as a USN Lieutenant Commander, Commander or Captain, or a USMC Major, Lieutenant Colonel, or Colonel; this would likely make the WSO the mission commander.

In the U.S. Air Force, "WSO" also refers to a USAF Combat Systems Officer (CSO, formerly USAF Navigator) who is the aft crew member in the F-15E Strike Eagle. In the B-52, the CSO crew members in the bottom portion of the aircraft are Weapon System Officers. In the B-1B Lancer bomber, there are 2 Weapon Systems Officers manning crew positions aft of the pilot and co-pilot. They are known as the Offensive Systems Officer (OSO), and the Defensive Systems Officer (DSO). WSOs also flew in the now retired F-111 Aardvark strike bomber, flown by the US Air Force and Royal Australian Air Force, and the now retired USAF EF-111A Raven airborne jammer. In the F-111, the WSO (EWO in the EF-111) was seated directly to the right of the pilot/aircraft commander. The WSO integrates with the pilot to collectively achieve and maintain crew efficiency, situational awareness and mission effectiveness. In the U.S. Air Force fighter aircraft such as the F-15E Strike Eagle, the WSO can pilot the aircraft when required, although this is typically during non-tactical portions of the mission (e.g., en route to mission area or returning to base). When designated as the mission commander (MC), the WSO is also responsible for all phases of the assigned mission, especially if there are multiple aircraft involved. For example, the aircraft pilot could be the junior member of a flight crew such as a 1st Lieutenant or Captain and the Weapon Systems Officer could be a senior officer such as a Major, Lieutenant Colonel, or Colonel; regardless of rank, the WSO would be the mission commander if he is qualified.

Training begins with several weeks of ground school followed by remnants of the "super-fo" program from the U.S. Navy where the SNFO takes front seat of the new T-6 Texan II for six "contact" flights where the student will become familiar with the T-6 . The SNFO is treated like a pilot training student for these six flights. After Contacts, the SNFO goes back to academics to learn instrument flying rules. Primary ends with a final instrument checkride. After primary the SNFO is compared to his or her shipmates and selected for either land-based naval aircraft or tailhook aircraft. Those SNFOs destined for the carrier-based E-2C or E-2D Hawkeye will be known as Air Control Officers and Combat Information Center Officers while those destined for the EA-18G Growler (USN only) will be Electronic Warfare Officers (EWO) and those destined for the EA-6B Prowler (USMC only) will be Electronic Countermeasures Officers (ECMO). Those destined for the F/A-18F Super Hornet (USN Only) or the F/A-18D Hornet (USMC only) will become WSOs.

Intermediate picks up where Primary ends for USAF SWSOs. After the instrument phase of training, students move to visual navigation (VNAV) "low levels" at 2000'AGL, and finish in the T-6 with a final training block called "forms" (formation flying). Forms consist of four flights of learning the basics of close in formation flying. After forms, SWSOs head back to ground school to learn an entirely new aircraft, the USN T-39 Sabreliner. The T-39 is used as an intermediate instrument and low-level trainer for SWSOs, where they receive a total of eight flights. Students are required to learn the aircraft in a two-week ground school period before they go flight side. In contrast, T-6 ground school is four weeks. Training ends at either VT-10 or VT-4 with the "i-grad" ceremony and top graduate award.

VT-86 is where all the training comes together to culminate in the SWSO receiving his or her wings of gold. In the T-39, a USN twin-engine jet trainer, SWSOs learn advanced instrument flying, radar navigation (consisting of navigating using an A/G radar from early F-16s), and composite visual/radar navigation. Training takes place on both VR and IR routes that criss-cross the south east United States. After A/G training, track selection takes place. SWSOs select either the F/A-18 Superhornet, or the E/A-18 Growler. The final three months of some of the hardest training at Pensacola will leave the SWSO F/A-18 selectee with their wings of gold. Air force WSO's no longer train at VT-86.

Following the winging ceremony, USN and USMC WSOs will proceed to a Fleet Replacement Squadron (FRS) and USAF WSOs to a Formal Training Unit (FTU) to complete advanced ground school and flight training to prepare them for their "operational" combat aircraft in the deployable operating forces.

Parachuting water survival All USAF aviators with parachutes on the aircraft attend this three-day course at NAS Pensacola, Florida. During the course, USAF WSOs learn the basics of surviving an aircraft ejection over water, obtaining food and drinkable water when stranded at sea, combat evasion at sea, and how to be successfully rescued by boat or helicopter. For USN and USMC WSOs, this program was previously completed at NAS Pensacola during their Aviation Preflight Indoctrination (API) training.

SERE The Survival, Evasion, Resistance and Escape (SERE) training course trains all USAF aircrew basic survival skills, combat evasion, and techniques to resist exploitation if captured. WSOs also learn how to survive an aircraft ejection over land. For USAF personnel, the three-week course is taught at Fairchild Air Force Base, Washington and the surrounding areas. The counterpart course for USN and USMC WSOs is taught at NAS North Island (academics) and Warner Springs, California (field exercise) for Pacific Fleet personnel and at Brunswick, Maine for Atlantic Fleet personnel.

IFF USAF WSOs selected for the F-15E learn basic fighter maneuvers (BFM) and surface attack in the T-38C at Introduction to Fighter Fundamentals (IFF). WSOs complete this training at either the 435th Fighter Training Squadron at Randolph Air Force Base, Texas or the 49th Fighter Training Squadron at Columbus Air Force Base, Mississippi. WSOs also learn about the culture of being a young aircrew member in a USAF fighter squadron. The course lasts approximately eight weeks.

EWO USAF WSOs selected for the B-1B, EA-6B Prowler, B-52H, and some F-15E selectees will become electronic warfare officers (EWOs) by attending this 12-week training program at the 563rd Flying Training Squadron at Randolph Air Force Base, Texas. A similar program for USN EWOs in the EA-18G and USMC ECMOs in the EA-6B is conducted at the Center for Information Dominance at Corry Station, Florida. In both programs, students learn the basics of radar theory, electronic attack, and electronic defense.